In the Hours between Insomnia and Insanity / Japan

Well, it wasn't that bad last night, but then it is sometimes when bright ideas come to me.  Sometimes.  Last night's light bulb came in the form of problem prevention.  But let me back track a little.

I've finally finished threading the Baby Girl Blanket yesterday and started sampling.  First I concentrated on floating selvedge on a double-width weave; both selvedges are on the right side.  Theoretically it was easy, and after a centimeter or two, after the two layers could be separated easily, I stuck a few window blind blades so I can move them around to easily see which ends belong to which selvedge. The practical difficulty was, this is a wide-ish warp and I haven't woven anything wider than 30cm since her brother's blanket; to weave properly, I have to sit in the middle of the warp, but if I do, I can't see the right selvedge well.  So with every other shot, every time the shuttled came in and out of the right selvedge, I had to move my Unsmall to the right.  Yes, slow.

While sampling, I realized some of the sheds for the bottom layer was so "thin", i.e. too many shafts were lifted so the shuttle doesn't glide over the remaining warps.  In fact, I'm using the heavy boat shuttle and sometimes it escaped right though the warp and landed on my foot.  I counted the number of warps lifted to see if I should change face so fewer shafts are lifted, but it didn't seem to make much difference on paper. 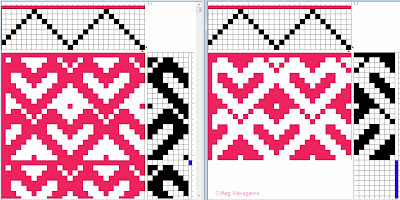 Above drafts show single layers.  Black squares show shafts lifted, so I want a draft that has more white squares than black.  Yesterday I tried the version on the left.  When I weave the bottom layer, of course all eight shafts for the top layer are lifted, so sometimes a little over 3/4 of the warps are lifted, and at 36EPI and with the heavy shuttle, it's a bit of an ask.

What I did realize in the middle of the night is this: one side of the finished blanket should be all the red hearts on white background, the other, white hearts on red background. While folded, when I weave the top layer, one set of shafts should be lifted, (let's say to weave red hearts), but when weaving the bottom layer, the other set, which create white hearts, should be lifted, yes? 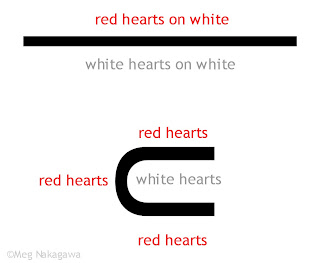 I think I need a combined draft to weave the two widths.  That's next.

EDIT: In the top, flat cloth, the second line should read: "white hearts on red".

In light of what's been happening in Japan, Ben and I have been discussing whether to postpone or cancel the upcoming trip home.  I haven't had the heart to discuss it with my parents, but have sought Brother's and Sister's views.  Yokohama is included in the electricity ration, which is officially expected to go on to the end of April, but since we lost the power generating facilities, (this morning, a thermal power plant was damaged,) I can't see how it can end in a month.  Most supermarket stock disappeared a couple of days ago, though this may or may not be temporary.

Late Tuesday, the "traditional" epicenter near Mt Fuji started rumbling at around Mag 6.4.  This is the one that shakes the Kanto region, including Tokyo and Yokohama, and continues rocking at Japanese Scale 3-5.  There is apparently yet another epicenter further west, in addition to the one in the Japan Alps which has been shaking since the original big one.  And then there is the small matter of the nuclear disaster.

We are weighing how much of a burden we will be if two extra people stay in my family's homes for three weeks, (we've given up the idea of traveling around,) both to our immediate family and to the region, verses how much we may be able to help, which will mostly be in the form of distracting/entertaining them. If Dad could travel, I'd at least get my parents out via Osaka, but I don't think he'd even want to travel to Osaka, so that is not an option.

Oh, the smoke ghost.  S/he finally went away last Thursday.  Then this thing since Friday.  Occasionally s/he's been back, but this time in an extremely strong cigarette smell.  Yuuuuuuck!!!
Posted by Meg at 3/16/2011 11:16:00 AM