Our mate Tim turned 50 seven and a half months after me, a while back. I promised to weave him a little something-something for the auspicious occasion. I wove one, but that one was too generic for such a creative guy, so I sold it.

A year ago I went back to the Information Center to have a fresh look at his carved pillars. (Actually they are a series of panels affixed to the pillars, but never mind.) You've seen this photo here before; this has always been one of my favorites as scarf motif. 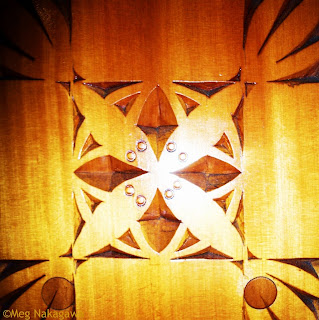 Here is the first draft; first draft because A) this was where I got to after working on it yesterday. I wanted to make the creature a little bigger, but when I did, the overall picture looked like Chinese noodle bowl patterns. I'm going to try something else today. 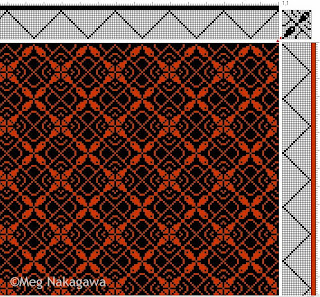 B) It's also the first draft, because I'd like to get two more specifically-targeted pieces from this warp without rethreading. One is an art swap, which I"ll write about when I have something to show you. The other one is Mama's Hearts scarf! 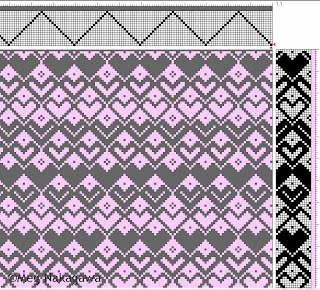 After staring (glaring?) at it for hours on end, fiddling with floats and then taking them all out to get back to the drawing board, and then fiddling again, I had to step away as I've definitely lost the simplicity of the original hearts.

Half of today will be spent on weaving the second hearts blanket, the other half, on the computer, figuring out these three projects. These pieces are in cashmere, so I don't want intricate interlacements. I'm trying to keep them simple.
Posted by Meg at 5/10/2011 06:45:00 AM