"Friends(hip)" Practice/Sampling
I needed to make sure a double weave technique I read somewhere long time ago works, so I threaded a sample table loom. 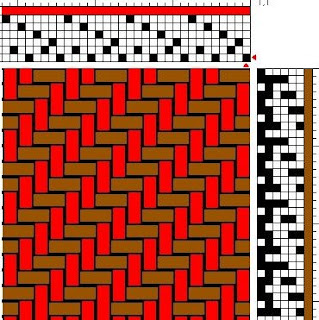 I wanted to understand the mechanism and practice, so I chose a simple twill for the pattern side; the final piece will have a Self-Portrait-based draft. The inlay (I hope this is the correct term) side where your yarns  will create (a) colorful shape/s is in plain weave. Because I've never done inlay or tapestry-style weaving, I sampled with the plain weave side up, which works well because when I want the inlay yarns to show on the pattern side, I can lift the extra warp/s/shaft/s instead of pressing it/them down. 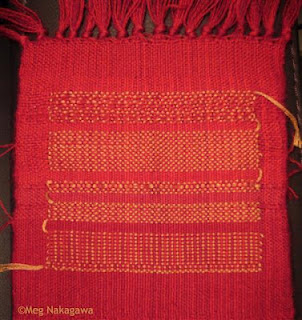 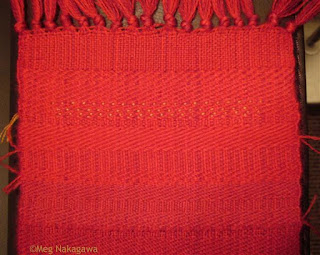 You get the picture. As it were.

What I learned:
I need to concentrate on the "Self-Portrait" motif/design next as "Friends(hip)" will also be based on the same. At the same time, I need to practice weaving on this loom/warp some more.

"Self-Portrait" warp will be multi-colored 2/20 cotton, 42EPI, 12 inches wide. I'm making a regular 8 meter warp and make scarves or something else afterwards.(36EPI if I start to panic.)

"Pillars" warp is off the loom and I vacuumed the workshop this afternoon. The last memento piece for myself was shorter than I had hoped - about 1 meter of the design part plus a bit of plain weave at the top and bottom. I wasn't sure how much warp I had left, so the design is awkward and out of proportion, but it is small enough to go somewhere in my house.

"Merchandise":  I started to think of cloth-covered buttons after Cally's Open Studio posts. I'll think about it if I have time.

EDIT:  Point 9 is incorrect; using more than 2 shafts in the inlay side does not add variety to the appearance of your yarns on the pattern side since it's all about which pattern shaft/s I lift. Which, considering the time I have left, eliminates having to experiment this aspect. Grin.
Posted by Meg at 9/08/2012 08:53:00 PM