Cherry Blizzard and an Apology 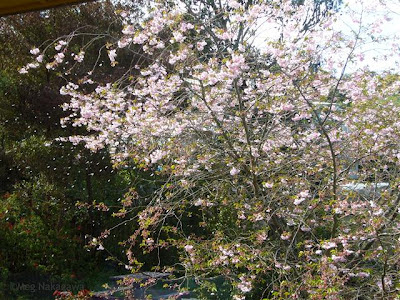 Whatever petals that remained after the rain on Wednesday is blowing away today. Moments before this, there was a strong gust from the lower side of the hill, (right) which caused a pale pink cloud to dance up in the air. Strong wind during the cherry blossom season is called Sakura Fubuki, or Cherry Blizzard, in Japan and we share a regional, collective sigh with the joy of the season, (depending on the year it's the mid-March graduation season or early April start of the new school/work year,) and the disappearance of something so fleeting and lovely. Which is probably appropriate for my mood of the day.

It pains me to have to post this, but I apologize I am most probably unable to make a Friends(hip) piece to include in the upcoming exhibition.

Because of the variety of width of your gifts, I decided to weave the piece on the 16-shaft Louet Klik, so I can modify the number of pattern picks to suit the inlay weft. The idea was to do some fancy threading on 16 and use a simple lifting more or less in twill. This loom is 16 inches wide, so I thought I could weave a 14.5 - 15 inches; my first mistake; it's too wide and I don't have a good handle on the beating. (And not a good time to recollect I've only ever woven up to 8 inches on this loom.) The second mistake was to use all 16 shafts: the shed for shafts beyond, say, 10 is but a sliver and with the slightly sticky wool warp, I have to pry open every pattern shed with my hands or a stick, which is not only time-consuming, but rough on the warp.

With that in mind, I simplified the draft, narrowed the width to 12 inches, rethreaded, and tripled the weft for faster weaving, and sampled. The design is now so dumbed down, it looks like a school project, and elementary school at that! It doesn't have the gift inlay wefts sticking out like relief against a flat red background, and the "chin" shapes look like badly balanced undulating twill with jagged bits. After seven samples, I can't make it look like something I wove, like something I'd like to put my name on.

I have half a day tomorrow, half a day Monday and 3/4 of the day Tuesday to do something about this if a light bulb lights up, but I've felt totally defeated the last 24 hours I'm not sure if this is going to happen. I've considered a cotton warp, using the Warp of Shame still sitting on the big loom, took out my RH and Mom's frame loom, but haven't come up with anything. Yet.

So, I apologize. They are not coming off the cork board because I know I can do this, and it's got me very interested in designing with multi-layered weave, but it's just not happening right now. And I'm disappointed because though in a different shape this was something I wanted to do when "Beginnings" was still "WYSIWYG".