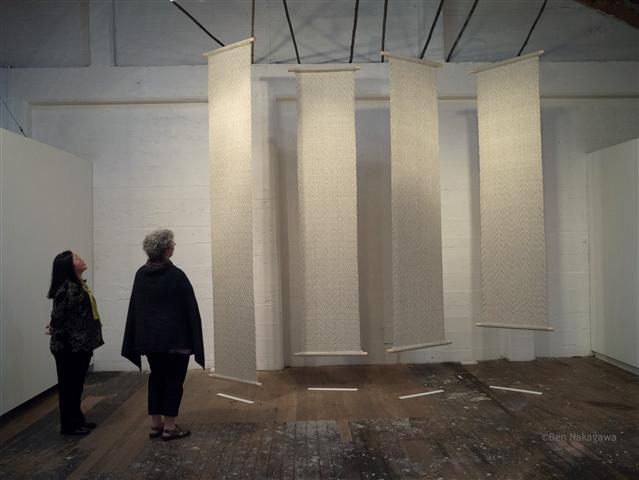 Well, they're up, the brouhaha has finished, and I don't have to go into town today. Imagine, my first quiet day in five days! Now if I could only stop the ringing in the ears...

I shall do a proper exhibition coverage here at Unravelling, but for that I need some more/better pics. Even though Ben and I've accumulated a couple hundred so far, they just don't seem to be... you know... the right ones.

But the opening happened last night. I so didn't want to go, and I dithered in different areas of the buildings hiding and bothering Vicky who "manned" the reception area as people started to come in. But I spotted a friend, and then I felt more at east. It was nice to see people; weavers, textile folks, our lovely, lovely photography friend Diane, former workmates, and my drawing class classmates. Some memorable moments: Deb Donnelly organized Yoshiko Wada workshop two years ago, but she was the minder and I was the, well, the trouble student so I didn't have the chance to get to know her then. She popped over from the North Island, and there may be a chance to see her in April if I decide to go to a workshop on the North Island. Errol Shaw and I talked a little bit about scale of work, but darn it, he speaks so softly and, again, I'd liked it better if we could sit and talk in a quite place. I might track him down and ask him more in a while. In the pic is Sharon, who is not only a textile artist but a very close friend of Jo's. After most of the crowd had left, we were lamenting the slow and excruciating death of New Zealand wool/textile industry and how hard it is for us to source wool yarns with scale left on.

The highlight would have to be this: my Self-Portrait piece was hard to find, and many of my friends had to ask me so I'd take them to it. Well, three of my classmates from Ronette's drawing class and I walked over, they read the blurb, and we burst into laughter. We are roughly in the same age range, (born within 20 years of each other probably), and I told them exactly when and where I became aware of my own body shape, and we've all been staring at beautiful naked ladies once a week for over three years and go home and, well, to some degree look into the mirror in awe that the image looks nothing like what we had in our heads. And I'm really looking forward to going back to class in a few weeks and being among them.

I'm still not switched on. I'm babbling on the keyboard. I had hoped to plunge right into cotton scarf on the Warp of Shame, but this is the fourth morning in a row my arms can't stop shaking. I hope it's psychological. I think I'll eat chocolate ice cream for breakfast and go to bed with a book. (Gale winds outside, just so you don't think I'm slacking off.)

Thank you everybody for your support, encouragement, compliments, and what I appreciate the most, laughing alongside me when that was the only thing left to do. I hope your laughter has been as animated and loud as mine.
Posted by Meg at 10/03/2012 10:34:00 AM