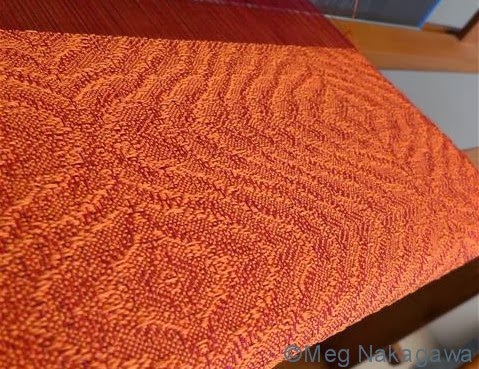 I finished Purple on Friday and tied another suspended Friendship warp to work on my different idea; this has scratchy wool warp in four reds, gazillion-ply orange Japanese silk in the weft, woven in a now-familiar recycled draft, I'm weaving Fancy Pants shopping bag fabric. I hope I can get two bags' worth in two different drafts.

If I were serious about bag production, I would of course first decide on a pattern, and plan where the center of design will be placed, etc, etc. I contemplated narrowing the bits in the middle rather than the side so the baubles will be closer together, but for this project I decided it was more complication than I wanted to contemplate. I don't know how well this fabric will deal with cutting and sewing, (not sure how I will finish it at this point,) so I thinking stickiest fusible interface, good lining, and simplest construction, but I love the working nickname of Fancy Pants shopping bag.

While weaving these drafts, I've also been thinking about shaft/technology-envy. I've been admonished by weaving teachers for my lust/greed often, sometimes by weavers who have the very big bad setup themselves; one who knew we had an identical 16 setup told me eight is about all I'll ever need. I don't disagree with being able to do much with fewer; when I moved from RH to four, I thought I could live the rest of my life on four, and why else would I still play on my RH?

But I grew up in a house where Chinese-inspired brocade and jacquard were treated as semi-precious objects, by which I mean they deserved to be placed under the very best vases, jade, polished rocks and wood in my grandfather's house, and guests' bottoms. (The pic is from a gallery, not Grandpa's.) Mom and her sisters wore monotone jacquard "weave design" silk suits, skirts and dresses to weddings, school entrance/graduation ceremonies, and other special occasions. Female relatives still sigh at the sight of the smallest Tatsumura fragments. So there, that's my heritage, my textile 0,0. Yours may have been differen, but it doesn't mean wanting more is a bad thing, or that you can shame me. 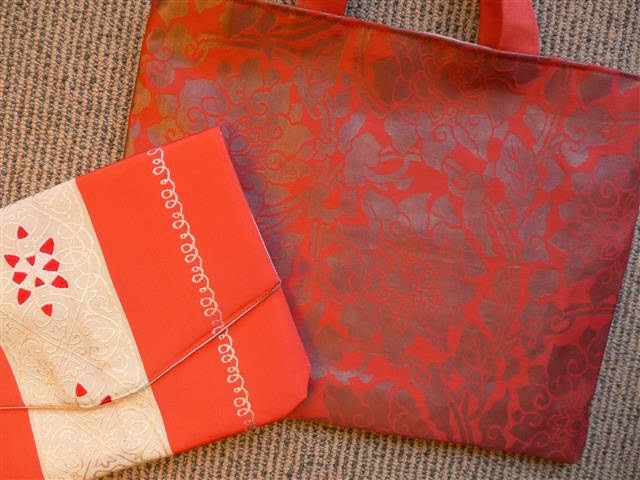 That very evening I got these from Mom. Mom, Sister and I don't wear kimono, so instead of handing down her obis as they were, Mom had three bags made from each of her two favs so we three can share them. To boot, Mom and I have very similar tastes in colors. Enough said.

Well, almost. Wanting a bigger badder weaving machine is one thing; the practicality is another. Cost notwithstanding, I feel I want to delve into more depth with my weaving, whatever that means. I find sacrificing a lot of time, energy and money on a "better" setup a distraction, time and energy becoming as scarce as money as I age. So, at least for the time being, I'm very happy to sit on the same loom benches I've been on for the last decade.

Still on the subject of looms, sometimes I'm asked what looms to buy; my stock answer has been to go to guild groups, try as many types of looms as they are allowed, borrow looms if possible, and ask around if they know of looms in need of a weaver. I've even heard of weavers in New Zealand threatened if they don't come pick up looms, it's firewood! (The looms, not the weavers.)

That's what I told Annie, and before she got to any groups, before she even moved to Wellington, she was offered an AVL. I don't know what kind it is but she was told it sat in a Nelson garage for ages, and Annie's only concern was the rusty reed/s. So, good for the previous owner and good for Annie. I so look forward to catching up with her in future, perhaps in Welly by her new loom!
Posted by Meg at 3/09/2014 12:02:00 PM