The three India/Not-Laharyia pieces walked out quickly and others in trickles, so in January I set myself a goal of delivering 12 new pieces to the Suter before I go to Australia in August, along with half a dozen quirky pieces to Refinery, working tough the remaining commissions, and getting to Thank You, sympathy and Just Because gifts.

So sorry for ungood pictures; I had touched a few unfamiliar things without realizing so the camera was not on macro and the focus was tracking. Geeeeeeez. But here are what's become of some of the pieces I worked on in March/April. 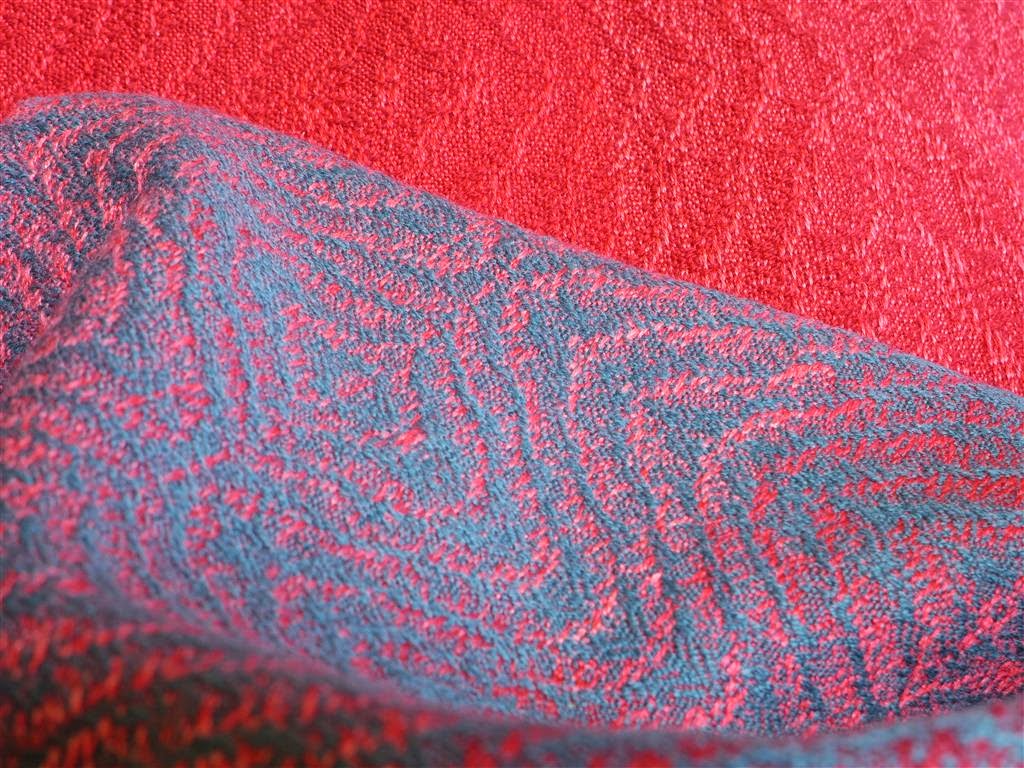 The warp is Doni's cashmere/silk/merino in four reds, one half red and the other pink, 24EPI. The red piece is one of the best I've woven with a fat cashmere weft, using a small portion of my pillars draft. The baubly one has teal silk/cashmere in the weft and is the one I had so much trouble with the warps breaking on the left side I considered cutting off. After wet-finishing, it still remains wobbly, but the fabric part is gorgeous I decided to sell it at a reduced price. 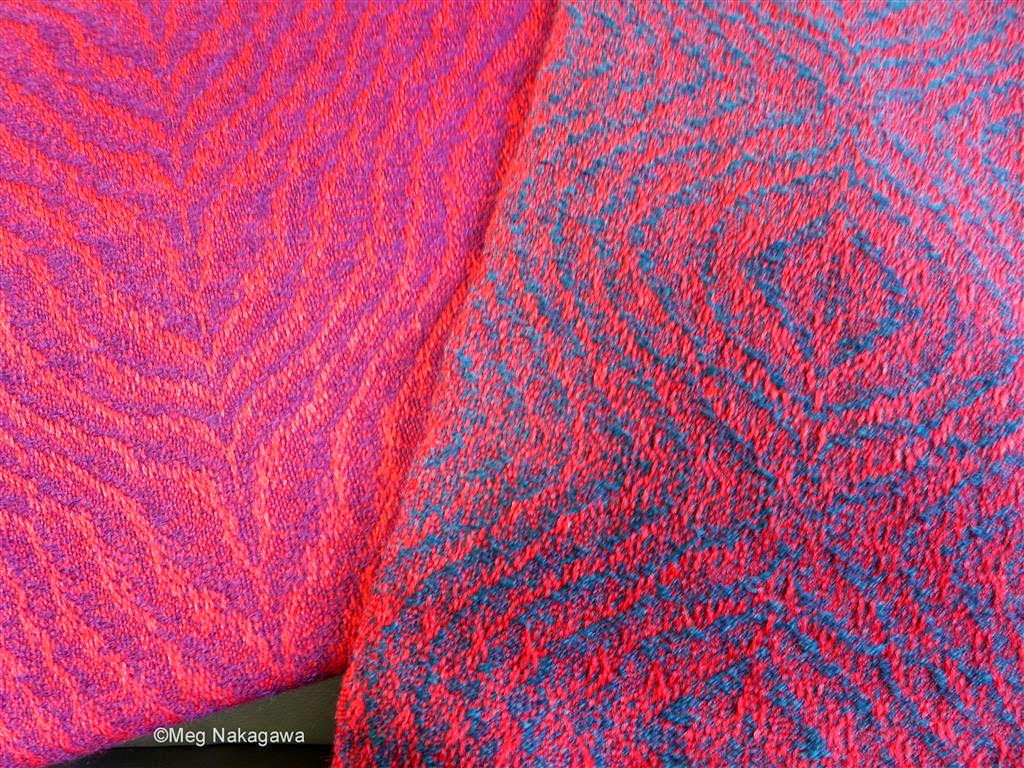 This warp was in two reds of Doni's cashmere/silk/merino, sett 21EPI; the one on the right was my do-over, thinking the teal from the previous warp was unsellable; the piece on left is more deep purple in real life; it has one of airiest, fluffiest, ethereal texture I've ever woven so although a little short, I noted that on the tag. I would not have minded keeping it. 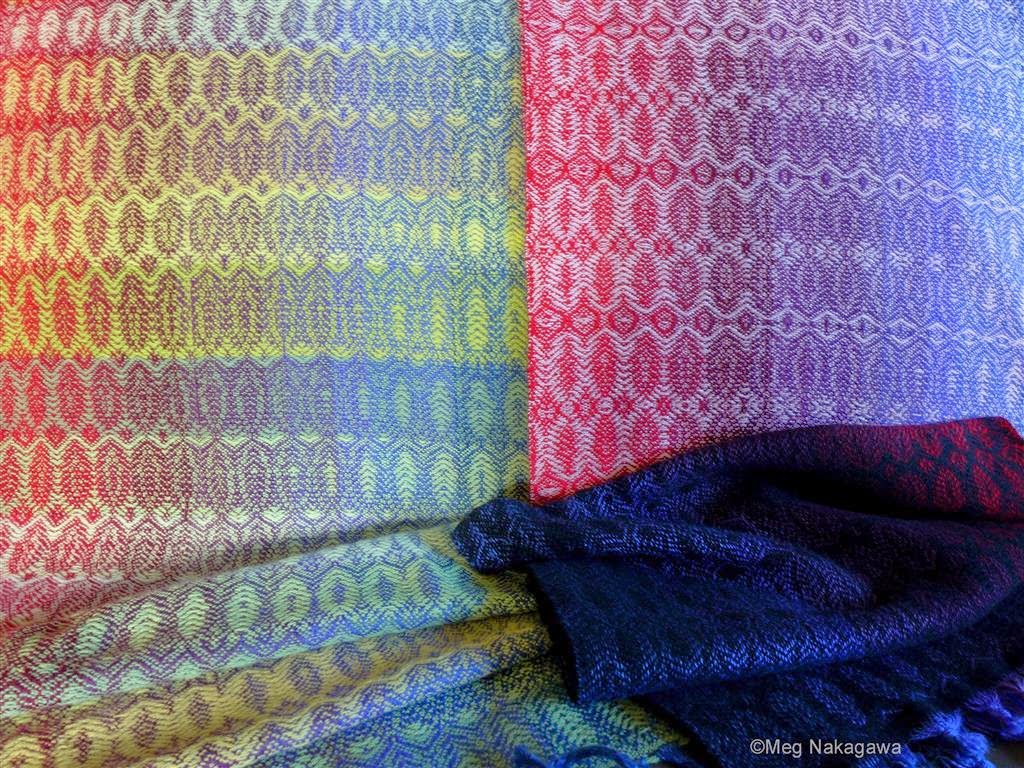 This was an interesting warp. The warp has my Japanese 100% cashmeres in gradation from red to purple to blue, made ages ago intended for Santa Fe Weaving Gallery.  But when I took the warp chain off the mill, it looked so unattractive I put in on the back burner. The first piece on the left has something line nine colors in the weft and is fluffy and lovely and of this lot is the best crafted merchandise.

While weaving this piece, Pat told me that Santa Fe had new management so I contacted Jill and the long and short of it was, "forget the four-more request, send pictures to new owners when I have interesting stuff". First I lamented the only outlet outside of Nelson disappearing, not to mention as far as weaving outlet goes, it was a pretty nifty one. But I was also relieved because I could never reconcile the difference between what Jill told me she wanted and the styles their website featured. It's OK if I'm not weaving at the high-fashion/design end, but for the time being I'm glad I don't have to keep wondering about what they really meant they wanted.

So I jumped into the shiny blue-pink piece, working for the first time in relatively-analogous. Then afterwards I wove with a fat matt black cashmere to create a stained glass window look; it turned out the first two pieces were so long the black is only a warp-end fabric, but it's OK. It's so different, to me, from the kind of what I normally do, it was weird.

All but the pink piece and the black warp-end swatch was delivered to The Suter yesterday. But I see a trend in my continuing, (and worsening) technical problems.
Posted by Meg at 5/11/2014 04:48:00 PM