You won't Believe What I'm Doing 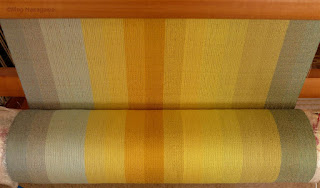 This is the scarf I made after the wall piece. The weft is a thin, (slightly thicker than 2/60), papery silk from Mom's stash. The yarn had a starched (?) crispness, so pink from the same lot was among the wefts sampled for the wall piece. Washing, however, took away the stiffness and the fine weft all but disappeared, so not so good for a wall piece, but good for a summer scarf. And it's my kind of look, isn't it?

Except weaving this was excruciatingly boring. I had to do something for the last piece, and even though I have a love/hate relationship with the freer tapestry technique, this was the only way I could think of to put a spring in my treadling step mid-warp. Beside, I intended to try this after Kaz's Saori workshop a year ago anyway.

The weft yarns are various silks of unknown origins, some may even be Mom's hand-dyed, hand-spun singles. The draft has a short weft repeat. I gave the sett some serious thoughts, as these wefts are considerably thicker than the two previous projects, but I couldn't be bothered resleying. Below is the right half of the draft.

Four repeats took a better part of an afternoon, and made up 15cm, so this is going to be slow, but I hope gratifying. I had planned to use the same technique in the cashmere-mix warp on KLIK, so this doubles as practice before that particularly delicate warp.

My thoughts thus far is this: it's all right to delve into the spontaneous, see-what-develops way to experiment/play, but for me this is not a good way to make merchandises. I can work better if I have a piece of paper approximately the size of the finished piece, with a line indicating where I'm weaving, so I can place designs more deliberately. Learning that alone has been worth it.

Thursday night while Skyping with Mom, I tried to explain, more to myself, how as my weaving practice becomes more stable/constant, it has also become boring. The immediate reasons are: 1) I haven't deliberately experimented with colors of late; 2) I default to twills almost without thinking; 3) stash-busting is on my mind, and even though I have a vast choice, I'm not used to thinking yarn=>design and don a phantom straitjacket and grit my teeth; and 4) the colors in the last warp was so not me. (The wall piece is hanging on Mom's wall for now; she's going to discuss it with her students when they come back in fall, and then deliver it to the client.)

In order to keep working steadily/productively, I am not reinventing the wheel with every warp and this does contribute to less satisfaction. I don't rush, and goodness I'm still slow, but I sense, (because I can't cite instances,) a greater portion of decisions are made automatically or default to the same as a previous project. This must mean I've some experience/knowledge, which should be a good thing, and theoretically leave me free to concentrate on more interesting bits. But I haven't moved on, so I'm repeatedly taking roller coaster rides but missing out on that queasy feeling in my stomach. Because I really used to feel that when I worked.

My mind keeps wandering back to Geodyne's project a while ago and the impact it had on me, particularly the second pic. Exciting times.
Posted by Meg at 8/29/2015 12:20:00 PM