Ben was home for ten days. We had planned to declutter a little, garden a great deal, cook/eat well, and then go away on a road trip. We had cold weather and rain at times but rushed outside every time the sun came out to do little bits. Ben cooked delish meals and cheesecake. At times I got thoroughly sick of gardening so I read. A good deal, as it turned out. But the house and garden is slightly in a better shape. The only thing is, we didn't do the road trip.

The trip, and in fact the timing of Ben's holiday, was planned around my favorite hellebore grower, Clifton Homestead's annual open house weekend. But when I rechecked the map midweek, I was shocked to find they were way down the bottom of South Island, not in the middle just south of Christchurch, as I had misremembered from other years I checked contemplating a road trip. This would add at least another day of driving, and as we haven't been on long road trips in several years, we weren't keen on making a quick trip to where there may even be snow or ice on the road. We haven't driven on those elements since we came to New Zealand; we are so spoiled in Nelson. Maybe next year.

I fell in love with hellebores when I saw my first one about 15 years ago; I think it was a burgundy/pink single orientalis, but I can't be sure because it died, along with a light yellow green, and a greeny white, among others I planted in the shade as instructed. Having learned that in New Zealand, "shade" pertaining to plants mean "don't need 24/7 sun", I moved the few survivors to another part of the garden, just outside the kitchen window, a few years ago, and they have been doing splendidly. Encouraged by the success, I've been adding two, four or six a year thanks to Clifton.

This year, though, in search of darker grays/purples/blues, I started to read about these flowers seriously and bought seeds from Europe. Because I am in the southern hemisphere, seeds from the north are, um, out of whack with our seasons so I don't know how this will work. And then I read Japanese growers have unique flowers, so they are on next year's wishlist. I've also been pollinating regularly. The only one gray/purple I have is pollinated with itself, but other purples and clarets are cross-pollinated with the gray. I'm not going to collect them but let them come up naturally.

Hellebores are a little like weaving; it takes a long time for seeds to show any signs of life, (up to a year?) and then up to a couple of years for a plant to flower. And new hybrids aren't stable, (is that the right word?) so one never knows how the next generation will look if I cross-pollinate.

The slowness of hellebore growing made me come to terms with gardening being on-going. Unless we go the concrete/paving way. I'm not pleased; I wished I could work really hard for a while and be finished for a while, but one of the reasons we came to New Zealand was we wanted a garden all those years ago, in our misguided relative-youth and I don't mind the work. I just wished I didn't have to do so much of it. Oh, dear. 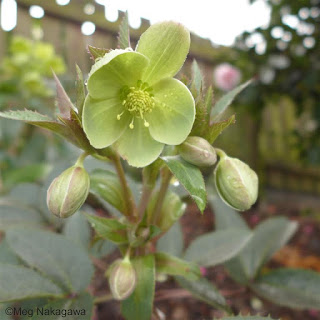 One of two strenii, this is called Clifton. It needs to move to a sunnier spot after the seedpods mature. 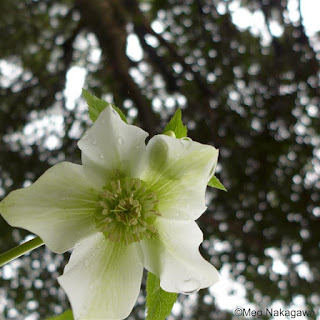 I'm also supposed to have purple picottees, (white with purple edges,) but they are not too evident. 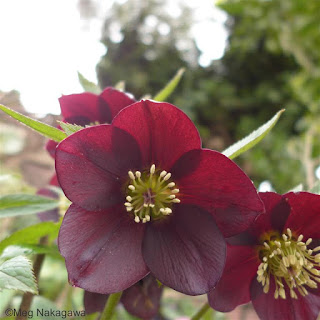 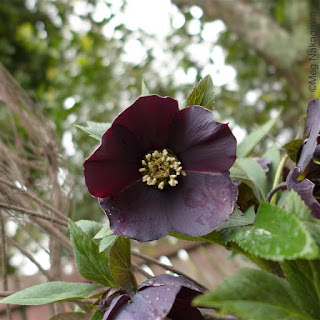 The only gray, (sometimes called slate?), which is really very dark purple, and my favorite. From above it's not as saturated purple but more purple gray. 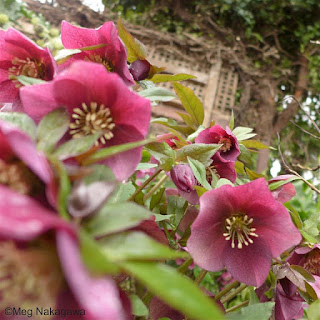 The clarets are much bigger and have two to three dozen flowers on each plant. They self-seed robustly. 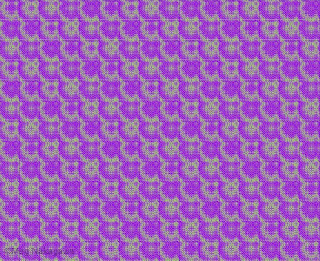 Some time ago when I couldn't sleep, I doodled on the software and came up with this drat. I'm calling it Hellebore Love, but now I think it looks more like pansies; never mind, I love them, too.
Posted by Meg at 8/28/2015 10:15:00 PM