So far, I summarized my Round I experience with Art Therapy, and the first two sessions of Round II. We finished Round II on Wednesday so here is the theme set by Jade, and the rest of what I did:

Week 1: Our relationship with creativity and developing a visual language. We drew scribbles with our eyes closed and found shapes and patterns.

Week 2: Journey and heroes journey - we thought about stages of our journey and our challenges and allies.

Week 3: Myself as a tree - we used painting and explored our roots, leaves, growth and surroundings as a Tree; A1, (actually two A2 taped together,) acrylic paint. 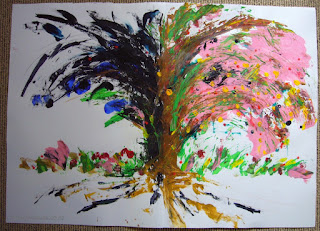 Week 4: Connection with nature - our mandalas helped us appreciate beauty in ordinary objects, ephemeral art. (My first ephemeral anything, and the pebbles were collected by my Philosophy Professor and the Fab Mrs; they decided they couldn't carry them all so these were what didn't make the cut.) 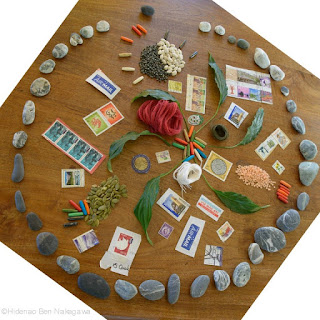 Week 5: Fairy tales and story - we looked at the format of typical fairy tales, using metaphors to tell stories, and used writing and the accordion book to help explore a part of our story. A5, collage.

First we had a short meditation; then, "finish this sentence" exercise, and lastly we made a wee book. The starts of the sentences are in italics. Some members drew, some wrote texts but I did something news to me; I collaged texts, and then added images. So some pertinent words are no longer visible. The book is an accordion, so my life is told continuously, and every single piece symbolizes something. (Since the original text was a quick, stream-of-consciousness writing, I edited in a few places to make it make sense.)

Once upon a time there was a girl who wanted to be great, to be the best at everything in the world. In this far off land she asked her Dad how she could become the best and they drew up a plan. She lived in a... humble house, but she had everything she needed, so it didn't feel humble. She was known across the land for being a smart ass? a slow child? a fat child? an obnoxious child? (I had a problem with this one.) She went on a journey to find... wisdom, a way to become the best, and the man who would rescue her, and help her become the best. Along the way she met a lot of truly wise people, and this taught her she wasn't wise at all, but she didn't know how to be wiser. She also met the man. She was surprised to find how much more enjoyable life was when she wasn't trying to be the best. And the man liked her any way. She found she could live happily without striving to be the best. The thing she was no longer scared of was being ordinary, not being wise, or wise enough. She returned with her pockets full of small wisdom, pretty things she made on the way, and the man who rescued her. 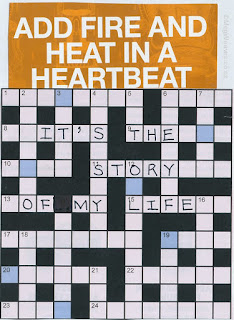 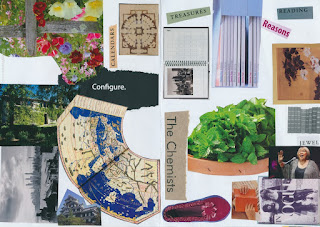 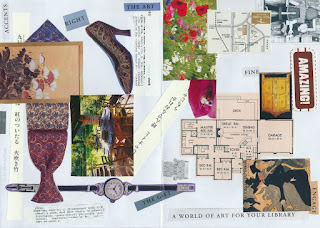 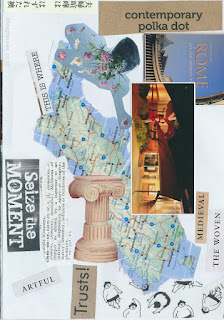 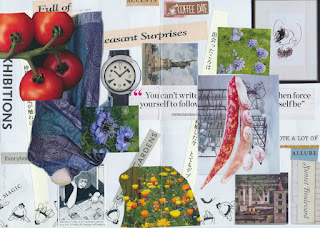 Session 6: Bonus session; Dottie Doll, because Jade loves them, but also to celebrate the company of the last few weeks. We're swapping them in the group so my Winged, Tailed One is going to Australia. 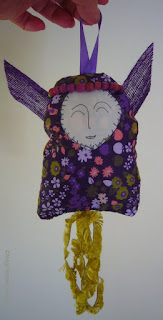 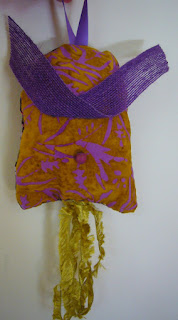 But it can't be that straight-forward; she has a tail, too!

So what did I learn in two rounds?

1) Making things in art therapy is done in a totally different mindset from my normal kind of making; it is the process that is important, and the resultant "thing" has more meaning to me, be they wonky, incomplete/unfinished, or bad/ugly. The process was more spontaneous, though not always/completely. Being foretold of topics, e.g. the tree, felt a little strange as we weren't told much in Round I, but the tree came out looking more "finished" than others. (I didn't plan out the tree painting, but I considered all the elements that had to go in ahead of time.) I hesitate making things I hope to sell in this way, but the energy/surprise in the process vs. remain the safe inveterate planner vs. the responsibility of making things to sell interest me. There has to be a workable though nonrigid balance.

2) I learned to almost completely ignore my creativity/critic, but still loved to hear others' comments. With weaving I have a hard time with comments, especially when complimentary, because I want to know why they think it's nice/pretty/good. In art therapy, we heard the same short "lecture" before making, so the shared background helped in commenting/receiving comments.

About my creativity. You know how much I like cats? (I don't.) My creativity is like a cat; it ignores me completely for long stretches, won't even come home, and when least convenient, it reappears and won't stop rubbing against my leg, begs for food, or sit on whatever I'm working on; I often feel I'm better off without it. It's the first time I was able to conceptualize/verbalize it and our tenuous relationship.

3) In every "self portrait", I saw dualities; I've always struggled with these inconsistencies in my character, but as I age, I've started to be able to see both sides of the argument, become able to change if I'm shown to be in the wrong, or resigned to lacking the energy/gumption to do as I thought best, so managed as best I could.

And though this is not new, it's grown stronger; when I first learned to weave, restrictions grid posed were also the reliable known, the box within which I felt comfortable. Now that I do things with paper, albeit forever naively/outsider-y, the restrictions began to feel indeed restrictive. Which makes me feel unbelievably unfaithful, almost a heretic, and yet it's still cloth weaving, not tapestry, I'm interested in. It's tantamount to telling Ben to change after 27 years because I've changed!! So how do I reconcile the technical challenges and the emotional turmoil? (The weaving, Ben, not you!)

I've been keen to return to weaving for a while but felt I have a few unresolved issues, and they're all related, so this thinking thread will continue.