About 10 days ago I went to Auckland, among other things to see a much-reviewed art exhibition. More on this later. I've been thinking a lot, soliciting friends' opinion/critiques, (OR venting/ranting/looking for agreement/endorsement?) but doing a few other things, too. I've been trying to untangle the threads so they can turn into readable blog posts, and categorize/compartmentalize to suit my tree-rather-than-the-forest thinking. So, please bear in mind the next few posts are interdependent, less lineal/chronological than usual?? Put another way, if I had the patience and skill to post a mind-map with interactive links, (I'm not even sure about these vocabulary,) I would.

So first: postcards with faces. During the month of April, a local office supply store is paying postage for postcards to anywhere in the world. Their main goal is to encourage kids to write/draw by hand. The deal sounded too good so I checked with staff, and they confirmed any postcard to anywhere in the world by anyone of any age was allowed, as long as they were dropped into the red box in one of their stores during April.

That night I spread the good news on FB, and a few frieneds wanted mine. (Including my next door neighbor D whose wife B is a real professional artist; they're reappear later in the post.) Armed with their addresses, plus a few more of unsoliciting friends and family, I packed a few purchased cards and a pack of blanks and flew to Auckland, where I intended to forced myself off news. I started working soon after arrival, moving furniture and spreading supplies but facing Al Jazeera and staying updated on 45 and Syria; at least that was one day Koreas/Japan/China was off his mind. 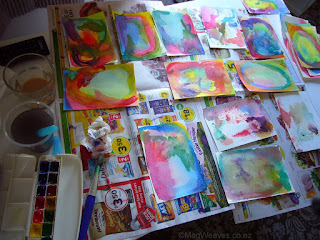 I started applying somewhere between three to five layers of watercolor wash on each postcard, focusing on the colors and their interactions, but also not looking at the intended recipient. The egg shapes, (and various curvy lines/shapes,) are what my hands draw naturally, and become faces easily; in some instances where I could not see a person, I forced egg shapes over the background; in others the unintended shapes looked like bodies, but where I could not draw the outlines well enough to show the human shapes I saw, (or so I thought,) more wash went on. I think in this last respect I'm all too pedantic and applies also to when I'm drawing outlines in pen; I don't need to draw the outlines exactly on the border of the shapes/colors, but must leave room for the recipients.

Above, on the first morning, I looked at the cards individually and enhanced/dull the effects of the previous layers of wash. Among the hardest was not washing the brushes in my coffee. 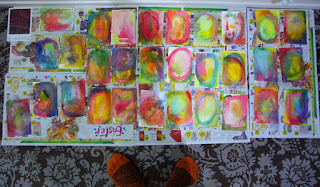 Third night, I applied water-soluble varnish from the art supply shop 5 min walk from my accom; my cheap/hard brush, with which I love to dry brush, took off/moved watercolor pigments, but after I got the dilution of the varnish right-ish, it not only worked well, but dried rather quickly. As you can see in the bottom left PC, ignoring the shapes/colors works fine, but I want to continue the line/shape/color juxtaposition awhile. 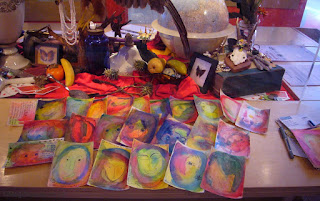 Some days "work" started before 5AM in my room, I was so keen! Outlining faces took place mostly in the Auckland Art Gallery activities room on Day 3, in between hiding everything whenever staff/visitors walk in, trying to ignore the world and enjoy mine. 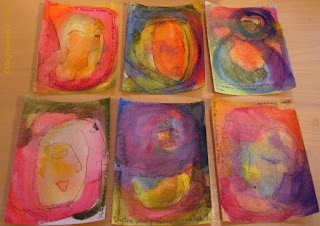 Because of the egg shapes, and because I saw more covered women in Auckland, I drew a few with headscarves: top left woman with the... what did I say... the illusive ultimate scarf?... went to a weaver; top center went to a Chinese Muslim friend in Malaysia. In top right, I said something smarty pants like, "sometimes in museums and galleries, my head becomes transparent," because part of the wash looked like a landscape, and because it was a lovely sentiment during the few days I "lived" in that gallery. Bottom left, I love it when I don't repeat what I did earlier, like another scarved woman, but a somewhat "Cubic" face/s pop up instead; bottom right is the slightly more representational face I had in mind at the start of the project, but by the time I got to her it was a real surprise. Bottom center, to D; a eye through a hole in a fence in the top half, a Rolling Stones-like tongue in the bottom. I  held on to this because it was too weird/rude and not to my but in the end I wrote something like, "I covet your executive veg," and sent it. Oh, goodness the text could be misinterpreted, too, I just now realized. I can only hope D and B think it's a big funny because they have lived in the art world directly/vicariously. Yikes. (They live uphill from us and get way more sun, so their produce are no comparison to ours, even in years I do a bit more outside in summer.) I repeat, I didn't check the recipients until I finished the visuals and moved on to the text! 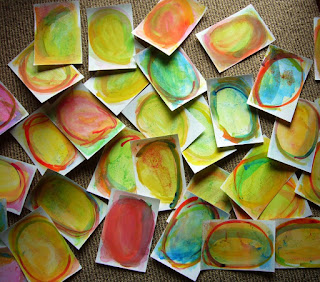 I got so much satisfaction out of the postcards I started another lot last night but had already forgotten my lesson as a pedant and superimposed egg-shapes on all of them, though I remembered the color interactions. Some will get a few more layers of wash, though leaving them in shallow try of liquid is another option. 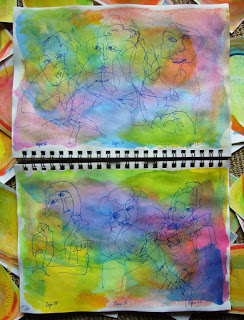 I've kept up with the faces-kind-of-every-day project; I don't draw every day, but try to keep up with the numbers, i.e. it's OK to draw seven on the weekend, and this is really working. Yesterday was Day 105 and I have 171 faces so far. I've had a long Modigliani phase but have gone back to Matisse; these two chaps drew/painted amazing neck/shoulder angles far more expressive than just the constituents of a face. Detecting same-y-ness in my drawings and mindset, and bearing in mind the aforementioned desire for looseness, I've done some blind contours which have yielded such joyful discombobulation which reflect what I think I pick up from Matisse's portraits and my attitude towards this project, and life. I must blind contours with my left hand tonight.

Colors in the wash overlap because 1) I'm still experimenting with mixing yellow greens, ochres and now watery purples with everything, and 2) I wash, then "monoprint" onto other paper including the postcards, or the other way around. I need to learn when to quit so they don't all turn the same light brown!

If you'd like a(nother) postcard, please let me know. They will be posted sometime before the end of the month.