We delivered the yarns to the Hospice Shop this morning. I feel relieved. The lot contained a small cone of possum/merino/silk, but in burgundy. That is oh-so my mom's color and I don't think I ever liked it much but sure used a lot because that was what was available. And probably because I thought it's a grown-up color and I have to like it. Maroon, wine, whatever you call it, I think I'll be OK if I never use it for the rest of my life. But I can change mind, too.

When I travel, I always have the intention to at least work on if not finish a project. Sometimes it's only book. Lately it's been a diluted version of those fabulous travel diaries/journals folks seem to create. Sometimes I just aimed to gather enough visuals and ephemerals so I can assemble later. (I have large, fat envelopes by the art supplies.) In more ambitious times I brought sketchbooks intending to draw those fabulous architectural/cityscape drawings folks seem to bring back from their trips. The best I did was at Nelson Airport before we left for Melbourne in June; I was happily doodling away and thought I'd get through a tiny handmade concertina book I made specially. Except I brought the wrong pen and it started to run out of ink even before we boarded and I felt disgusted I didn't think to get another pen. Any old black felt-tip pen.

I knew I'd be busy on my last trip to Japan so I was wise enough not to plan anything. (Although I did come back with some ephemerals, I've used up most in LJ swap collages instead of stuffing another  guilt envelope.) But I seem to be so energized nowadays I keep coming up with project ideas, e.g.:

* Drawing/doodling in small sketchbook/s;
* A "visual clue book", a notebook full of color and shape and motif inspirations instead of a travel-based scrapbook as a diluted but doable alternative;
* Working on some kind of a photographic project. This one gets bigger and bigger in my head;
* A writing project that's been in the periphery of my mind for months and among all else this can be on-going.

These in addition to any number of books/audiobooks I hope to finish. (I'm leaving home my portrait project in an A3 sketchbook. I hope to get enough done before I go, and then catch up later.) And I know at best I might work on the project a few times in the three and a half weeks while I'm away. The photographic and writing projects are so seductive, so far ambitious/greedy has been batteling against sensible/satisfaction-of-completion.

Or. I can have no project. But that feels like not living life fully, such a missed opportunity after 11 months of lul.

I went to the Red Gallery to meet up with Maria and Alison, and although we only had a short time, it was lovely. We already set up our December (I hate to call it) meeting. It was also the second time I went to the Red since Jay left five and a half years ago. It's doing super well, although to me it feels like a design store combined with arty nick nacks, though very nice nick nacks. 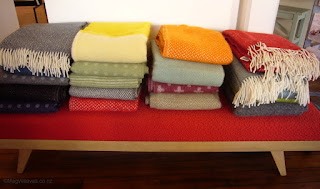 These were some of their large and colorful Latvian blankets, but scratchy as anything.

Maria and Ben and I had lunch at a Vietnamese restaurant. (Just this morning I realized more than half of my friends are vegetarian, and Ben and I thought, of all the places we knew the Vietnamese on Hardy Street probably offered the best quality at very affordable prices; Maria confirmed any Asian restaurants offered a number of good Veg options.)  I've been skirting around the idea of asking her help to develop two or three nice ideas/patterns for bags made with my handwoven cloths, but then the discussion went on to practical vs. unique vs. something more and she's coming over to help me clarify my options before I go to Japan. I also need to make a list of practical things I'd like to learn from her.

Ben and I then barged into Volume after 3 and I continued (!) the discussion with Stella and Thomas, that I'd probably have to try Auckland or Queenstown if I want to sell more, vs. loyalty to Little Old Nelson, vs. outlets other than/in addition to the Suter. (With their new format, the Suter shop has turned into a real "shop", and I've lost all my allies in the last couple of years there, Andrea, Anna and the volunteers, so I need rethinking.) In terms of making, rather than sensible/practical weaving I could sell at lower prices than before, I've been contemplating ridiculously labour-intensive, (Thomas' words,) pieces and changing a fortune for each and/or focus on exhibitions, submitting, not setting up my own. Stella said we'll keep talking about this, and we left in good time for them to close shop at 4.

Except Volume closes at 3 on Saturdays. They didn't tell me; I found out on their FB page this evening.

To increase exposure and the chance for more sale, I played around with Instagram, as was recommended by a few folks, for a few hours last night but you can't post from a laptop. There is a convoluted trick that can trick Instagram into thinking this is a phone, which Ben and an Australian friend currently in France figured out for me, and/or Ben said I could use his tablet or phone, but I got so impatient and, you know, some things just don't feel worth it. So I deleted the account in less than 24 hours. Maria, on the other hand, raved about using Pinterest as a digital bookmark/scrapbook, and Ben thought she made so much sense, so I now have a Pinterest account, again, with six images.

The Venerable Grandma was happy with the blankets. I might even reach a four-figure income by the end of the year; 1%ers, here I come. Although as I told Stella and Thomas, I tend to invest in my "business" long before I sell.