Randy-versary, Half-Birthday, and Changes to Changes in Plans

Eleven years ago this week I was in Randy Darwall's workshop. I often wondered if I'd have a chance for another workshop, perhaps in one of the famed American craft schools, but that wasn't to be. I was going to write to Randy and Brian before the tenth anniversary but didn't. Regrets don't do any good, but maybe I'll write to Brian.

I learned the phrase, "half birthday" in the last year or so. It never meant anything to me until 1985 when I met a work colleague who became a really good friend whose birthday is October 3. But the more I read FB posts about half birthdays, I've come to like it; there's less pressure as it's not the real birthday, but a good chance to reflect or revise plans.

Like on half birthday last year, I gave up the idea of most of my stash being used up by my 60th. Which is in six months. And when you're mildly/moderately depressed, that is one giant load off one's shoulder. 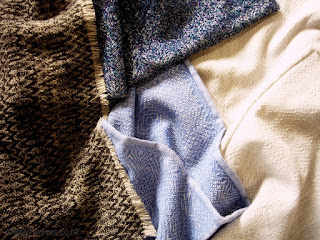 I finally finished hemming the baby blankets; one hem on the blue isn't as nice as I'd like it to be, or as the other three, but I'll see what happens when I wash them. I have a contingency plan. I love the gray, (it's pale gray on undyed, so nothing like in the picture,) Ben loves the blue. The drafts are similar but different.

The cloth part of the blankets are nice, thin and delicate. As baby, (toddler, really,) blankets, they may be not as robust as their cousins', but these babies live in the warmer climes in the city, and it was what Grandmother ordered. To be sure, it's more my style. Although I said I'm never weaving this width again, these make nice grown-up nap blankets, and Ben and I are, "hum!"-ing.

The blue pillow cover, I constructed the way I intended; the side showing more warps on the outside. I hope it fulls a little in the washing, but from my past experience with this merino/mohair, not likely. On the other hand, fewer merino loops will be undone in the hard ware and tear. Its size, pre-wash, is roughly the size of a standard pillow. (As in on the bed, not cushion on couch.)

The charcoal piece, I've cut off most of the naughty part, and am now unravelling/unpicking enough, (a nasty, dusty job!) so I can make fringes like the other end to make a shorter piece, and call it a knee rug, either indoor or in the car. I still really like the way the design shows, but even with the same wefts in different colors, this one is decidedly scratchier than the other two. 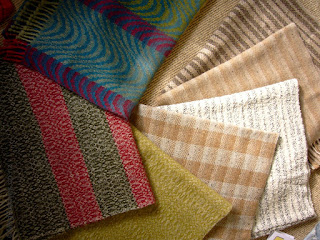 I had hoped to have a wooly sale in July/August, but didn't because it felt a little too soon after the cashmere sale, and it was the hottest time period in some places, so I changed it to September. Then we had that interminable cold, and now it's kind of close to Japan trip, (and I still have a few stuff on my priority list closer to the surface,) and it won't be until early December when I can work on this. So I was going to bring (back) some to the Suter.

While pressing Ben's shirts today, though, I wondered if I can set up another pop-up shop without having to work as hard as the previous two. And I have an idea. It'd have to be worked quickly, (oh, so not my forte,) but possibly possible.