Esther's Santas were finished on Sunday; they have turned into Unseen University faculty. See Rincewind?? Their wizard weirdness and arguments are deafening; good thing they will live outside. Ben hates gnomes; I'm surprised he's looking forward to these guys being dotted around the place. 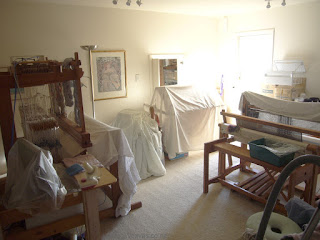 I'm trying out a new orientation for the four-shaft in consideration for where the tapestry loom might go. This orientation gets better lighting for weaving, but it seems to take up a whole lot more space, and I don't like it because I can't get a straight line for winding on the warp. The loom can be tilted slightly to this end, except it's so delicate I spent much time adjusting the angle while putting on Esther's warp. 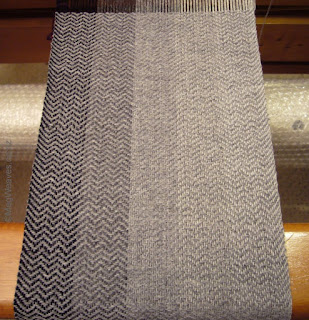 Esther asked for an traditional look. After sampling, a number of achromatic weft choices looked flat, so I'm using 20/2 100% in mid gray, (same as the center warp,) and a slightly lighter gray in silk/cashmere, together. It doesn't look exciting now, but after washing silk will shine, so it will look a little more complex/interesting. That's the plan. And 83cm woven.