To Boldly Go Where Many Weavers have Gone Before!

I abandoned the stretchy cotton cowl project for now, and started the other idea I had while making Ben's scarf: I'm knitting Mom a short tubular scarf; she won't have to fold it in a certain way to achieve maximum warmth and it'll be short and tiny so she can put another decorative scarf on top and then put on a jacket/coat if she likes. The width is similar to a sleeve. And because it's tubular, i.e. less purling, it's going quicker. 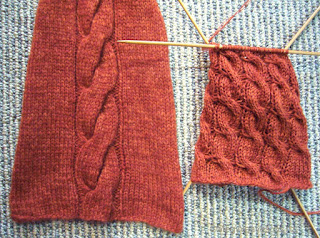 The problem is, though, and I see this not as a problematic problem but one that requires thought/direction, is I find this more boring than Ben's. I'm using three strands rather than four I did with Ben's because it needed to be fluffier and lighter for Mom. Ben's had two strands of 100% in one color, one strand of a second color in 100%, and a fourth in the second color in silk/cashmere, which gave a comparative solid color plus light bits and sparkly bits. In comparison, Mom's has one strand of the first and the two others, so the overall color is lighter, but the cloth looks more mottled; funny that's the first word that came to mind while I used to see it more complex and interesting.

I don't know if my taste is changing, if I want to make/include bold into my visual vocabulary; I don't know if bold necessarily means flat, or if something can bold and complex/layered. I hope it can, i.e. a scarf can look bold from a distance, but delicate/complex/layered close up? See how many adjectives I can come up in defense of not-flat?? 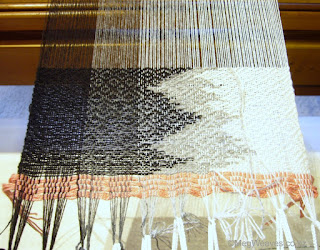 This is what I started on Esther's warp. The warp is far less complex than the previous clasped weft warp, only a gradation of five achromatics. I've put my cousin's husband's piece on the back burner because I haven't come up with (a) good weft color/s.

I wanted to use only black and white in the weft but don't have enough white, so I'm using a mid-gray as well. This white isn't even white but a very pale gray, and I wanted to use another pale gray, (second stripe from the right,) as the middle weft, but had none in 20/2. So the one in use is the same as the middle stripe, which makes logical sense.

It's FAR more time-consuming clasping at two places per pick, not just twice as. I want the lines to be more or less parallel, but that's not as easy as I thought. With three colors, the middle color determines the size and the shape of the two stripes on the sides, so every pick I should weave the mid-gray first, but I find that unnatural and want to start from the side. What's weirder is the lines are so different from each other. I don't know why they're turning out this way, except that it's raining and the light in the basement is different, not necessarily darker, but with the new position for the loom, unfamiliar. I also envisioned the mid-gray being much skinnier, sandwiched between black and white, but that's not working, yet, either. 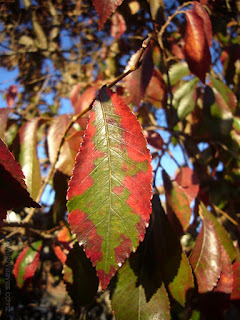 Some weeks ago I took gazillion pics of leaves from one tree. I had clasped-weft composition in mind, but also, you know what they say about mixing red and green in textiles? The more they say "don't", the more I see possibilities. Hee hee. Also rare for me to look to nature for inspiration, but then I had an hour to kill before Ben was ready to go home, and saw the tree in the parking lot.

Which reminds me of something I read a few nights ago: "If I had been a real writer I might have found post-modern beauty or at least a few lines that pretended I did. But I was an islander from an island at the world's end where the measures of all things that mattered was not man-made, and such sights that moved modern literature did not move me." Richard, Flanagan, "First Person"

I look to stories, fiction or non-fiction, history, art, architecture and literature/lyrics for inspiration. I grew up near Tokyo, and then spent a few years in Minneapolis pre-Internet. After 23.5 years in NZ and most of it in little ol' Nelson, and in the era of ever plentiful Internet, I find myself split in two: a keen awareness of not knowing what's going on elsewhere, or not being able to see it/them in person, of my own FOMO, (that's "fear of missing out", Mom,) on the one hand; and the relief from and appreciation for living far, far away from the trends/fashion/news/noise. That's something I've had to learn how to do, but I prefer living in the basement inside my head.

Pat came over yesterday to have a look at my clasped weft pieces, my stash, and my basement, to strategize. Online sale is still front and center on that list; I'm moving at a fast snail's pace in the culling department, but I do see bright lights at the end of a long and curvy tunnel now. Pat clarified for me rules for keeping/culling yarns and art supplies:

1) Nelson and New Zealand are hard places to get interesting/good yarns or art supplies, and postage and exchange rates are crazy even with Internet shopping,  and now we're going to be taxed 15% sales tax on all overseas purchases. Experimenting is good, keeping yarns “just in case” is not a sin, and I have some interesting stuff, so keep what I’ll have a hard time replacing unless it violates 3);
2) Tapestry loom may take me into different direction/s so I may want to hold on to certain yarns with which I may not want to weave scarves but want to use as wefts. We see lots and lots of bag fabric;
3) Clarify experimentation and non-product material from nice-garment material. And for goodness sales, Do not waste time weaving "not me" pieces I’ll then have to make excuses for in making them sound attractive. Nice. OK.

I spent last night rewriting my new rules into actionable culling checklist, and I'm ready for another go. There is always FOMO about yarns that survived years of culling, but I do have oh, so much nice thin merinos, cottons and silks that I want to weave with! But then what if I want to change directions completely and work with fat yarns for bold expressions?