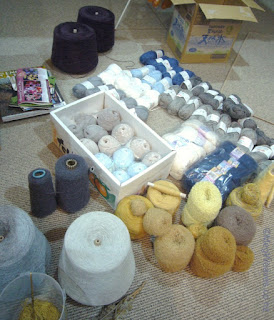 I got enthusiastic Friday night and brought out all the cottons I bought very early on as a weaver; all grays, blues and white/natural. I still love the colors and would like to make special things, though not sure if by weaving or knitting. (The Brazilian cotton, after that washing experiment, feels rougher as if the yarn had a kind of coating that washed off, and the collar, after about an hour, gave me the same powdery feeling in my mouth. Not sure if it's worth keep experimenting, although the colors are lovely.) 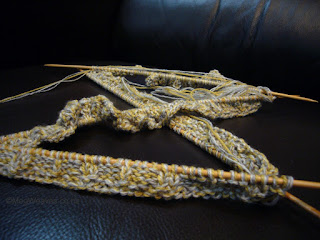 Anyway, Friday night, I also brought out two gray cashmeres and a bunch of Mom's pomegranate-dyed cashmeres plus commercial yarn, mainly wool, and cashmere/silks from the pomegranate project box. The aim was to start Mom's big crawl (??); she wasn't keen on cotton "collars" but wanted a crawl, but we hadn't discussed the style/size, etc, so even though I spent a few hours getting one started, it's not happening. For a crawl, if I'm going to knit her one, I need her body so I can figure out a good size. 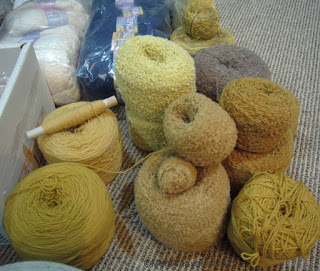 These ever-so delicious pomegranate yarns project yarns, (some commercial to augment,) I had put in a box perhaps a year ago, intending to weave biggish wraps. Maybe the babies Mom dyed with the fruits from our former family home over many yarns need to be made into something for her. Maybe I'll lug these home in October to knit a craw "in situ". 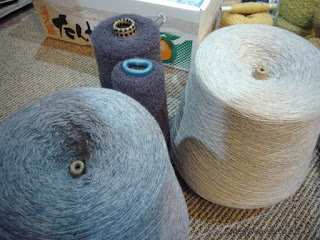 Two grays and a dark gray cashmere bouclé looked great together and I started another small scarf, but the values were so different it looked speckled, what we call "sesame seeds and salt" look, so that's been undone, too.

Sunday and especially Monday night, I almost went crazy not having a knitting project to work on; stared at a possible needlepoint project also, and ended up playing the same old game on the computer while watching a film with a great cast not a good story. :-<

During the course of gazing at cable knit designs on the Internet, (first time I ever looked up anything to do with knitting!) I came across a new-to-me tradition/style called brioche. Of course at first I loved the association with my favorite pastry, (difficult to bake "right", though,) but this style is reversible, perfect for scarves and especially big wraps. At present I'm reluctant to learn yet another new thing, and would much rather study/practice more weaving, but I have made mental notes. Have you done any??

I used to feel guilty/sad about spending a lot of time knitting, albeit only in the evenings, but I decided it's OK as long as I'm using up yarns, and it happens mostly in the evenings. My work life of weaving/weeding hasn't been as active as night life of knitting, though. :-D 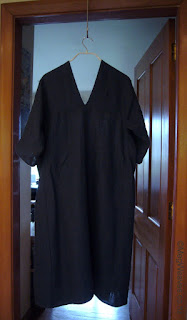 Saturday: I tried on my linen dress at Maria's stall in the market. It felt slightly too long, and when Maria showed me how the sleeves could be pinched to make them taper, I liked the look better, but because I haven't worn a dress, or a skirt, in so long, I brought it home as is to audition it and get back to her if I'd like anything altered. (Though I've bought a couple of skirts, the last time I remember buying a dress is spring/summer of 1990 and that was after a long  hiatus.) 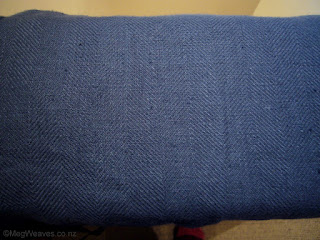 It is thick linen, prewashed with enzymes, pretty heavy in weight but with a beautiful drape, (I'm going to say it again; it's like a big dog leaning on your leg,) soft as a blanket and my first reaction was, I want to sleep in this. It's based on a Finnish Viking design, (mine after an under-dress,) with mostly straight cuts and seams. The color is lovely dark blue, or slightly faded indigo, in slubby twill.

That does not eliminate the small problem my body shape is so wrong for the dress, (well, any dress,) and I look like a beautiful walking pup tent. But that is not the dress's or Maria's problem, and who knew a loose-fitting dress would prompt me to reopen books on the charbo-light diet we're supposed to be strictly adhering to. :-D

Although I have another dress coming, I'm now dreaming of a Chanel-style jacket, no braids, in the same weight linen, if not in the same fabric. Ben's got something coming in the spring/summer. We even talked about Maria sewing something for me with my own cloth, something I've fantasized since I met her in 2012. And it's the first time I'm interested in clothes for a long, long time and it's a good feeling, :-), but first I must downsize. Quite a bit.

Now to downstairs. I haven't woven in ages, but last night I couldn't sleep thinking about weaving the achromatic clasped weft.
Posted by Meg at 6/12/2018 11:08:00 AM