Or "recovering vertebra"? More at the bottom.

I've wanted to weave but the clasped weft being the only warp I'm actively engaged with, and not wishing to continue while standing at the loom without vertebra or the ability to concentrate: 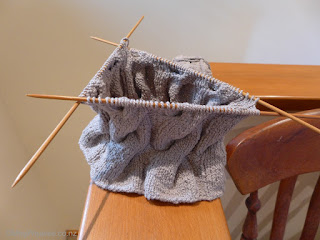 I knitted a collar with the dusty Brazilian stretchy cotton for me. It was supposed to be looser and bigger but I got this far with one ball and I have thirteen left, (I'm going to check the cotton box today because it's hard to believe I'd buy five each of two grays and four of baby blue, if you get my meaning,) so there are many chances of reworking. This sometimes look a dull, nondescript gray, (like the color I associate with 1960s pubic housing apartment blocks in Japan,) but in different light it's a smashing, rare mid-gray with no hint of hues, somewhat like yarns labeled pewter. Trust me, it's yummy. 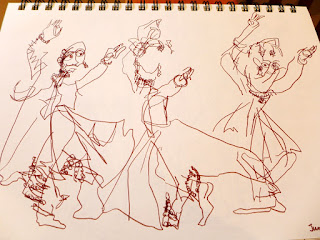 I've been blind-drawing people again instead of abstracts. I've had fun looking for photographs of ethnic dancers and there is a delicious place where the attractiveness of the costume enhances but not overpower the beauty of the body and the movement. Right now I'm into Indian and Philippino dances, but I haven't researched specific styles.

For years I wished I were that person who did crafty things in the evenings, but I think knitting, needlepoint, and sometimes drawing work. So, hurrah!

I've been reading a bit about art, exhibitions and artists online. I wish I could be more stoic about weaving but I may be too practical; I weave because I have the tools and the material? But it's not financially viable? Does it matter if I don't have to buy anything for, oh, 10-20 years? What do I do with stuff I can't sell? Is this how I want to spend my life? Is this lack of stoicism, that these "considerations" can stop me from weaving, proof I am not a "real" weaver? Proof I'm fake? Am I sticking to it because a life change at 60 is too bothersome? It's my regular menu of self-pity I try to make sound slightly different each time.

I love weaving and it's still my technique of choice, but I envy the freedom and do-over-ability of painting/mixed media, (I've been indulging in Jane Davies' vids,) and while weaving I don't feel the same soaring feeling of expression I do while using paint in particular.

And what the hell do I weave so I can amaze myself?

Lucky, I'm feeling stoic today. I have energy to behave accordingly, at least for a few hours. (More at the bottom.) Can one feel stoic, or is it something one just is?

This blog is called Unravelling, so naturally I was curious about a Radio Lab podast episode, and now I wonder if I have to worry about my increasing preference for abstract art and repetition, or if I can still insist that's the nature of cloth weaving.

On the the same day I listened to Terry Gross interview David Sedaris in a peas-in-a-NPR-pod-style chat, learning Sedaris was 61 and a lot older than me! Golly, that was enjoyable, oh, 12 minutes or so thinking I had a couple of decades to reach where he's at in life, that my weaving life is far from a "late" stage!!

Cold 2018-02: for three weeks I've had airplane ears; you know, that which is supposed to go away by moving one's jaws vigorously; if not, eardrums vibrate to one's heartbeat on quiet moments? Plus some coughing and some vertigo. Though I've had a few good days, I'm thoroughly sick of wasting time being sick, I've wondered if our easy-on-carbo diet is contributing to the problem, but on reflection colds have gotten progressively longer and more frequent as we age, and this long cold has been going around Nelson most of this year, so we just have to lead a healthier lifestyle. (Yes, I did heap sarcasm there.)

The worst part this time has been the feeling I'm constructed like a water balloon, not with water but with unspeakable otolaryngological goo.

I finally gained audience with Doc Karl late Friday and was duly prescribed strong antibiotics which prevents me from a) taking calcium, and b) lying down for at least an hour. Calcium was going to be the hard one as it meant, I thought, no coffee or tea for during breakfast/dinner for five days. I am getting used to the "coffee-tea" Ben makes me in the morning: one part coffee to one to three parts hot water, no milk. I feel so grown up!

Yesterday I discovered I shouldn't have milk for the whole five days. As Ben said at the start. I'm employing the old tactic I taught myself during the Depression of Winter 2009, that if I can't do anything else, cook. This is also handy because I can then indulge in late afternoon whatever-I-choose-to-do for a couple of days.

After no dairy for two days, on Monday I already felt better. On Tuesday I felt so much better I was sure to recover completely by midweek, indulged in a bit of milk drinking in between twice-daily meds, (intentional,) and cooked mushroom soup with cream for dinner, (unintentional). Tuesday night, for the first time in eons my head felt clear and the world looked more vivid and I realized the airplane ears were gone.

Wednesday morning the airplane ears was mild but had definitely returned. Then I made pumpkin and leek soup. My pumpkin soups usually have the texture of soft mashed potatoes, so we usually add water/milk/cream after pulverizing. Yesterday I added milk because there was an extra bottle that's usually gone by Wednesday morning. (We have local milk in glass bottles delivered on Wednesdays and  Saturdays.) I really wasn't thinking. Last night I was on a flight to Tokyo, about four hours in. The ears were driving me crazy. This morning they feels worse because I feel so stupid.

The thing is, I cook during the day, often in the mornings immediately after I wash the dishes, and because we eat diner around 7, 7.30, although I'm mindful about not having dairy at breakfast/dinner when I take the antibiotics, my brain is having a hard time connecting the two. Because usually I'm pretty good with this stuff. I do worry this is part of age-associated cognitive difficulties; I worry a lot because I'm seeing too many instances of me not thinking straight.

The lying down part is more comical/sarcastic, as if the big pharmaceutical knew I'd been on the couch, dazed, wondering where I left my backbone. You wouldn't believe this stuff, though; sometimes I had a staring contest with the clock trying to stay upright and a couple of times I managed only 50 minutes before I crumpled to the floor. I felt the big, gloved hand of vertigo, the glove usually in beautiful transparent color of black tea with lemon and sugar, gently push me down. Other times, I'd forgotten I'd taken the stuff.

I'm going to prep meat for meatballs for dinner, then go wash Mom's tubular scarf. Then do something else after that.