That was a Very Long/Short Fortnight

I haven't done any weaving. A commission piece has to go on the big loom, and the piece needs to be in harmony with a fabric swatch that's making its way to Nelson. I thought I'd leave the loom free until I work on that piece, but, hey, it's the festive season, and I'm not sure if the client is in a hurry, so I'll wind the orange warp, maybe this afternoon. And weave it in the hellebore draft. Or something else.

I've been so eager to start the needlepoint project, but I can't decide if I want the design to be more or less the same as the previous as I intended, or something new. I did, though, panic-buy a whole bunch of yellow-to-orange threads a fortnight ago when I saw the business-for-sale sign in the window, second time in two years, of the only shop selling DMC needlepoint wool in Nelson. Not sure if I have quite enough, not sure if I need a few beiges/taupes, but I'm good with yellows for now.

It's been too hot and sunny or raining most days since I've come back. At least that's the story I'm sticking to. The few cloudy, cool days we've had, I really wanted to do something else... Like print-making. (And now I have to learn a bunch of print-making words. Lordy.) 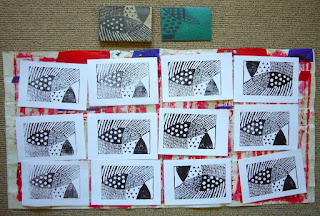 First woodblock print in decades, using tools my parents bought me when I was around 10. I saw identical sets online last year, so they must be good enough. I couldn't decide on a theme or design, so I just made up designs as I worked using as many of the knives/chisels/thingies in the kit as I could. 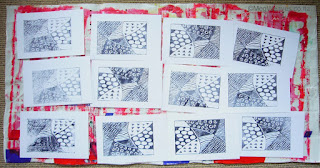 Linocut. This I know I've done several times since I left school. I tried to mix blue and black to create indigo, but it looks more like soft black. Ditto re. design. 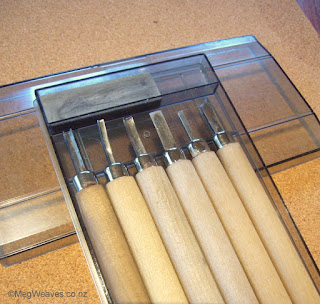 I love cutting both wood and lino, but don't have the control I think I used to have, and hoped sharpening the blades would help. I first used the waterstone that came with the kit, then my big kitchen knife one. I learned these blades are made of soft metal, (i.e. cheap,) and if I were too vigorous the tips changed shapes easily. Oh, dear. So in addition to controlling the cutting of the medium, I need to learn to control my sharpening. (Both the wood and lino are maximum three-five years old, so it can't be that bad?)

I used inexpensive "print" ink I bought in Japan, which for all intents and purposes behaved like acrylic; printed on cheap, (110gsm?) drawing paper; spread the ink with a hard rubber brayer; and rubbed the back of the paper with a tiny baren. I don't have a piece of glass on which to spread the ink, so I taped a big plastic bag on my cutting board.

Issues:
1) I can't control the depth of the carving (?) like I know I used to be able to. Ditto with curves, especially on lino. Improvement is much needed. I also need to learn better sharpening skills; Larry the woodworker sent me some links to YouTube vids.
2) I can do the leaving-slivers-in-space thing, (you know, as if I didn't cut as cleanly as I should have in bigger spaces, especially in woodcut,) but I opted for cleaner shapes/lines as much as I could. I'm fine with either, but don't like big, fat slivers.
3) I need a descent-size piece of glass. Spreading ink and applying thinly on the brayer is hard; spreading ink evenly on the wood/lino is harder. With some practice I could see how I could improve re. woodcut, (I had too much this round.) but lino is slippery and at least this ink is not at all suitable. I could use acrylic and add an medium, of which they are plenty around, but this time I switched to using an old waffle-weave dish towel. This was harder in spreading the ink evenly as parts of the towel spread while other picked up the ink, but there is also the possibility of creating unpredictable/uncontrolled background patterns.
4) I'm sure there is more to come, but for now I'm enjoying my own enthusiasm.

I want to work next on the top drawing of Ben sleeping on the bullet train in woodcut. The outline is easy enough, but I've been looking at one Renee Gouin's monotype prints to learn about color planes without outlines. And her colors are lovely, too. So much possibilities! I was also reminded, while looking up print-related stuff, that when we were in school, we used to cut cardboard in positive, to-be-inked, shapes and pasted them on another cardboard and made prints this way. I'm keen to give that a go, too. 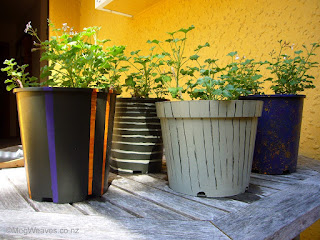 I also started four pots of lovely-smelling geraniums this winter, but could find only very old plastic pots that were big enough for my idea. I painted the pots last week I can gift these next week. With the cats-dogs-and-monkeys rain I've almost given up the idea, but today I can apply a clear coat to try and protect the paint work, even though, as they are from sample pots, they won't last forever.
Posted by Meg at 12/22/2018 11:22:00 AM