Hello, again. I've been home for ten days but in an existential coma. As I get older, flights gets longer, luggage gets heavier, and airplane meals hideous-er. Just as well we can't travel too often, (I have no idea how my parents did most of their travels in their 70's!) and the reason I like to stay a while once I get to wherever I get to.

In time I'm hoping to tell you about, (unless I change my mind, have more interesting news, or slack off):
But first, something I'm pretty proud of. Or at least I was until I came home. The very last week before we left, instead of weaving or finishing items on my To Do list, I went whole hog taking care of my hellebore patch. It looked kind of like this before: 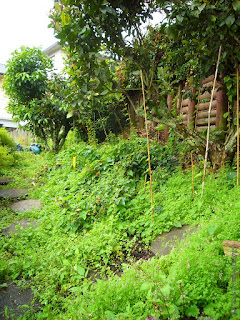 But in six days/33.5 hours, (including two hours on the day we left,) it looked like this, with all the seedlings planted and marked either with sticks or shells. 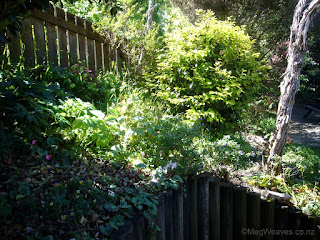 The right edge of not-purple area, weeded a little; this extends a little further left. 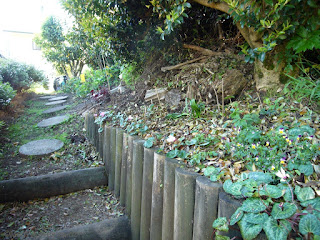 The left end of the not-purple area and the approach to the purple area. 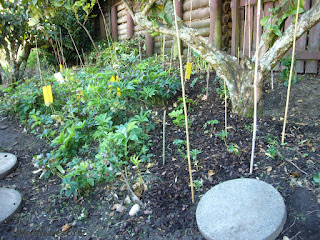 The purple area I started some years ago; I've taken out not-hellebores, (except one small chrysanthemum,) and extended the patch further back. 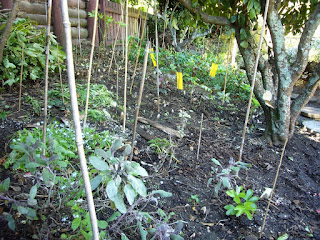 The left end of former old purple area, with a few more planted closer to the boundary. 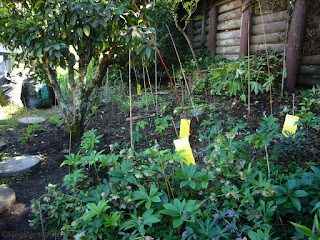 The extension is almost as wide as the old purple area, but not nearly as deep. This is where most of the new seedlings went in. There is some space for extension where old branches and leaves are piled up by the boundary; I didn't have time to move them. I'll have plenty of self-seeding babies from the older plants to fill that space eventually, although we stand there while removing the ivy, too, ergo the rubbish being more convenient there. The rubbish bags are still there; again, ran out of time, but then, not high priority. :-D

Looking at the photos, I am genuinely proud, even if you can't see much. :-D It was very hard work under a scorching sun, but I was determined to get it done, and for once I did. While we were away, neighbor Barbara offered to water the pots and this patch, but she messaged me to say there was quite a lot of rain in Nelson and... well, the "before" photo above, that was actually taken today. See the rubbish bags? :-> 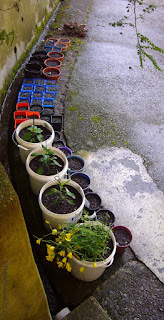 We bought chili and parsley/coriander seedlings on the weekend, so yesterday, along with a bunch of old (some expired but not all) seed packs, I took care of them. It's been raining more than usual for this time of year, but it's warm, so great for purchased plants, just peachy for weeds, and white flies have come back with a vengeance; in other words, Kafka's Garden as usual. But I intend to keep going outside on cooler, cloudier days.

There, I said it. 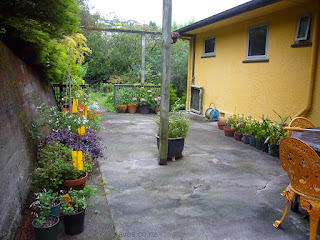 And for another pic that doesn't show much, I need to spray the patio for green growth, weed the pots, rearrange them for the summer sun, and bring up all the tiny ones I filled yesterday. There are a few pots that can be emptied, (for more old seeds, ahem,) and the hinterland, (pity you can't see the lavender and carnation that went in during that same week;) most propagation have been successful but they've been obscured, too.