We've been trying to use up things in the kitchen and have not had Earl Gray tea leaves, among many other stuff. Good thing Kath had her own tea bags in her purse yesterday afternoon; good thing I had hot water and milk. And sugar/honey if she wanted some, but we were too busy talking I forgot to ask. Which part should we label "Fail"?

Also, I gave her the pink silk/cashmere piece from the gray warp, just because she liked it, and I did not photograph it. Dang! It was the first time I came face to face with issues arising from my habit of designing with warps, which is hard to explain without pictures. In short, I have a habit of concentrating on the movement of the warp ends in designing, even though I look at both sides while working. The merit of the habit depends on the fiber and sett, but in this case it was extremely marked and took me by surprise. Maybe I'll borrow it later to shoot it. Anyhoo, Fail for not photographing.

Her life is going really well right now, she's just returned from Europe where, among other things, she met the great-granddaughter of Emmeline Pankhurst and had afternoon tea at her house and ate her baking! 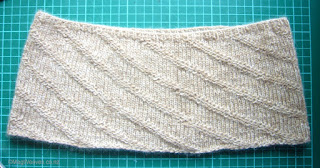 Mom's cowl didn't work out, either. The cashmere yarns were too soft and there is not a lot of support structures, (in my mind, more interaction of knitting and purling?) so the piece flops on the shoulder, not to mention it's much too wide for Mom. I knew the wide part while knitting, but I somehow hoped it would shrink in the wet-finishing. Fail. I might start another with the same yarns, or mixed with something else soonish; I could finish it while there? Or start there while I have Mom's head nearby.

However, I have been doing fairly OK, compared to other times, in crossing off items on my Pre-Trip To Do list. I probably won't cross out all, and the garden is endless so that's in the Kafka list, but I'll give myself a B+ if I manage to finish the black and white warp, and A- if I finish a few paper/paint stuff requiring little effort to finish, and in some cases, send away. The other two must-do's, I can do in between the above two. The reset, pfffft.
Posted by Meg at 10/12/2018 11:52:00 AM