It is raining this morning, and not just tentatively or symbolically. It's been so dry for weeks, a good portion of laundry hung inside dried in half an hour. And not good for the soul, at least not this one. Happy dancing coming up.

Tuesday boost: Annabelle came over and we had a go with Letter Journaling for five hours, chatting, experimenting, and sometimes in silence. We experimented, she with collage, I with deliberately making cold vs warm backgrounds, then she having to work on top of a warm background. Not her forte. I was surprised how automatically LJing came back to me even though I haven't done in recent months, how easy it was for her. Annabelle is analytical and critical I was bracing for a heck of a lot more there-there-ing but she dove right in. Afterwards I was exhausted and energized at once. 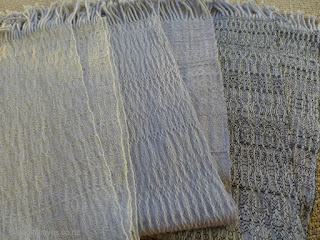 Wednesday, as I scheduled last week lest I keep postponing, I visited a lovely embroidery/needlepoint/knitting shop in town, Broomfields. I can't remember if it was a year ago or more, but I went in browsing and ended up approaching the shop owner about handwoven scarves and she told me to bring some in. My last gray project were in colors seen in her window this winter, (the display had changed by yesterday,) but shock, horror, she remembered my initial approach. I'm not sure if I was happy or embarrassed. Anyway, I now have two outlets. It's been 12 years since I last had to approach someone about selling my stuff, and it was just as unnerving, but with old age comes dulling of emotions in my case, so it wasn't as intimidating as Red Gallery was.

I took a bunch of pictures, inside and outside the shop, for research initially, but after I started weaving I deleted them because I wasn't aiming to "replicate" her colors. Clearing of my head, so to speak. I should have kept some to show you, how she coordinates the colors inside her shop is magical, soothing, ever so therapeutic. I'll do that before my trip. Another good luck; her name is also Andrea.

I love her embroidery and needlepoint kits and charts, and there is one country rabbit I'm quite keen on, but you know I just make things up as I go, and I can't read the tiny marks in charts any more, nor can be bothered enlarging/printing/coloring in, etc. But now that I'm knitting, I might need needles and such, and I can also see my using some of her lovely knitting wools to weave.

I also had lunch with Jean, which was not as fun as usual, as a mutual friend was diagnosed with cancer with perhaps weeks left. Jean's just been to see her.

I went to Ben's work's library for about an hour until he finished work. I was astounded by how many books they'd gotten rid of from the shelves. (It's school holidays so I didn't think they were all checked out.) I didn't see the fine arts section but in the applied arts section, each shelf were one-third to half empty, and none on weaving either in the art section or the other, (craft? alongside woodwork books,) I could find. After the initial shock, as one does what one can, I delved into some of the so-called "art textile" books, (&^%$#@!!!!!), and got a few rebellious ideas. There will be more on this in future.

Ben has a medical appointment tomorrow.

And some friends are meeting up for dinner on Saturday.