After delivering elephants on Tuesday, I wanted to weave the rest of the warp but I couldn't make up my mind whether to use medium gray weft all the way as I intended, or many colors as with the elephants, and I'm still undecided.

Wednesday morning, the house urgently needed tidying, cleaning, etc., but I was on a weaving roll and wanted to work, so I did the absolute minimum, (among other things, three loads of clean laundry waiting on the couch for days finally got folded and put away.) I put on a sample warp on Klick for the next project; I hope to finish weaving this today and wash. 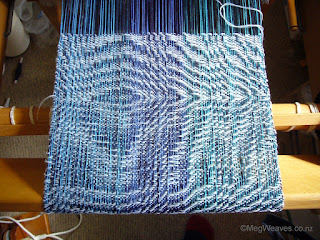 This is for the grandmother who ordered, over the years, six baby blankets and one wedding present, and this one is to be for herself. Since she's known me at least since the naughts, she also knows I used to have lovely good merino; she's a real connoisseur of softness. The last two baby blankets for her were woven on the same warp, using the last of good merino/mohair in the warp and from memory my new 2/30 merino doubled, (or tripled,) for the weft, gray in one and marine blue in the other. But the drafts were a little different, a little tighter for the blue, which makes her insist the gray is much softer and she would like hers like that.

To be honest I was uncharacteristically efficient weaving these two blankets, I made them quickly and sent them off just before one of my Japan trips, so I don't remember much, nor have record/posts about them. All I know is, I don't have enough of any of the good old merino yarns to weave a whole blanket. So I'm pulling out all merinos and a few cashmeres that fit her color specs, multiplying skinnier merinos, auditioning 11 candidates in the weft. Re. the warp, I doubled the 2/30 merino for the elephants to approximate old standard 110/2 (<>2/16, good but not the same;) with this sample I tripled the threads and am sampling three different setts at once.

The design/draft will be a familiar fancy twill of some sort, but with long floats. The sample is in eight shafts, because I've wanted to weave this double-width, (not confident about the joining,) but the elephants were roughly 60cm on the loom, and with three pieces joined the finished blanket was only 149cm wide, so even if I put on an uncomfortably wide warp, I'm not confident it will make a comfortable, grown-up blanket. So three pieces joined seems to be my only option. But I'll have 16 for the twill.

We'll see how it goes.

Further on the menu:

* Weaving, ironing, and movies give me ideas about weaving projects; I can't remember what triggered the idea but on Tuesday I saw a different angle on Syrie; I don't know how I'll proceed but I'm excited pondering. I might have to finally create the tag, "Syrie".

* I have five Letter Journals I put on the back burner, with my swapmates' knowledge, during the elephants rush. 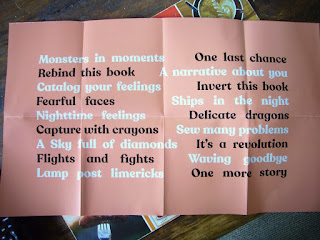 * Out of the blue Stella asked me about The Sketchbook Project this/last week, so out of the blue I signed up for one. When I did this in 2010 and 2012 I was far less experienced working on paper, and didn't exactly enjoy working on them; I hope that's changed. Of the themes, I'm interested in "One Last Chance", "Waving Goodbye" or "One More Story" reflecting on the recent changes in Mom's imprisonment, moving into a care facility and my own aging.

* I want to tie-dye a few more shirts, if anything else to get them off the couch which has turned into another To Do spaces. I have three of Ben's thin summer Ts, (easy,) and two of my thicker winter weight tops, (harder,) and two relatively new tops of mine I ruined, one with pasta sauce, another with bleach. It'd be lovely to resurrect them.

* An online sale with a few new pieces.

* Finishing a few pieces to list include in said online sale.

* Weeding/gardening. Although I started late in the season, I was making good progress before Japan, and I lament I haven't continued while working with the elephants. (No, I don't.) I swear, weeds grew as I stood watching at the sink finishing my coffee. It's been a windy-with-some-rain November this year, while the last several years Novembers were in near-drought conditions. Cherry flowers lasted longer, as did hellebores; orchids are just starting while other years they started as early as August.

* Clean closet/drawers. I've got a few more hand-me-downs from Mom.

* Clean stash room. Now that I have a new "default" merino suitable for warp, my plans for stash reduction has reverted to using the merino in the warp and stash yarns mostly in the weft. I also prefer not to have boxes on the floor downstairs, so I have to use my tiny room upstairs wisely, a job akin to squeezing one more passenger on a Japanese morning commuter train.

* On Tuesday, after delivering the elephants, I ran into Glenys; we are still on re. the tapestry loom. This is another reason I want to vacate as much bulk from the basement as possible.

* This is a long-standing one: I'm still looking for a mid- to long-term project, but I have no idea what. Originally I wanted a paper and/or paint project, something I could work on little at a time, (not my forte,) culminating into lots of, or a compilation of, little things. Then I thought to work on a small series of medium-sized something, spending more time on each piece. But I also like the idea of combining my interests: drawing/collage, printing, needlepoint, weaving... All I know is it will not be a traditional woven tapestry - do you know how long one of those things take?

I jump from one idea to another at times; convince myself I can work on all three, (or four, or five,) at once at other times; and forget all about it often. It is easier and more pleasurable contemplating possibilities before, (or without?) deciding, but if I find the right theme, the right project, it could give me a focus of sorts in life besides, the day to day To Do items, you know?

* I'm writing a summary post on the elephant blanket project. I always say it's for my own record, but then I seldom reread my posts, (I find it more embarrassing than listening to my voice on a tape recorder,) so I've gone back and forth about it. And I had so many mishaps I can't remember them all any more and some basic/preventable mistakes and some results too embarrassing to share. But it was a lovely project to be immersed in I want to record it just for the heck of it.
Posted by Meg at 11/15/2019 11:25:00 AM