If I don't post somewhat regularly, my posts can get somewhat long, :-D, so let me sum up what I've done since the last post.

I haven't woven, but I've mended four pieces and two warp-end fabric; fringed two pieces, the second red piece, and the brown/white piece; which leaves the two pieces from the merino/mohair warp to fringe. Then a bunch of washing, and loving vinegar rinse for pieces I withdrew from The Suter; then an online "Send Meg to Japan for Mama's 88th Birthday" sale. :-D I've checked all the pieces, started entering status on a checklist, and thought whether to change the way I organize the information for the sale. It'll probably be similar to the past sales because after testing out different styles, it settled on the style I felt comfortable. Albeit a unexciting! :-<

Esther graciously adopted some of my warp-end fabric; I've also asked Stella if I could show her some. They both sew. In fact, damn these Kiwi women, most know how to sew well, they preserve/jam fruits and veg deliciously as a normal seasonal thing, and bake without shortcuts. Esther gave me feijoa chutney, feijoa paste and feijoa upside-down cake, the last of which I devoured like an animal in front of her, (ahhh, refined flour!) and mixed her chutney with my chilli sauce to marinade chicken for dinner. These are women much younger than me; somehow I can forgive older women being fabulous domestic goddesses, but these young'uns! Not mention men who embroider or knit beautifully; we bossily asked one to knit Ben a stylish new sweater. Pictures to come. 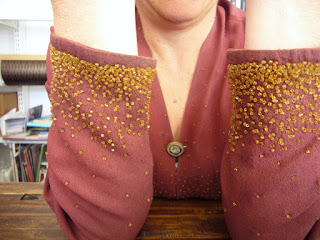 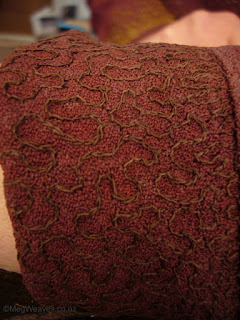 Besides jewelry, books, sewing and everything else, Stella is known for her fabulous vintage garments, but this was a stunner; not only the beading on the front bodice and sleeves "rise up", but even the stitching to hold them was part of the decoration, on the inside of the sleeves. (Oh, to be a maker of this caliber! And no wonder Stella has to handwash most of her clothes.) 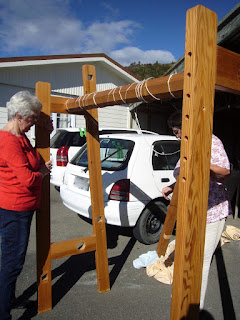 Pat and I went to see the aforementioned tapestry loom at Glenys's, and, whoa, I feel as though we went to view a VW Beetle and was shown a Jag. Or a Jeep. It's an impressive Australia machine, huge, heavy, flexible, (Glenys thinks I could easily make it four shafts, at least with harnesses if not the treadles,) and it comes with a built in warping board at the back. I was reminded of my childhood upright piano. 190cm high, 160cm wide, 100cm deep plus me, a bench or chair, and some gap. 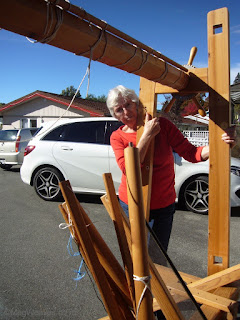 At first Pat and I, without consulting, thought it was ridiculous to think I could have it anywhere in my house without major reorganization not just of weaving spaces, but it is a magnificent loom I started wondering what else I could weave,  and also about when I'm even older and can't handle weaving on the four shaft, standing and bending over. I need to cool down and also look at my spaces particularly the basement where the ceiling is slightly higher.

Pat and I also discussed alternative ways of making clasped weft cashmere pieces; tables looms, which I already have, was the first solution except I can see so little of the progression of the designs; I also proposed constructing a simple frame loom, about which Pat was adamant I'd be thoroughly frustrated all too quickly.

Maria has been selling linen clothing at the Saturday market. I was too late yesterday to see her wares, but I found her position and the one piece I saw was fabulous; I don't think I've known such thick but soft linen in my life; in fact my experience of linen has only been with a stiffish summer fabric that no matter how much I moisten, creases before I finish pressing. I never understood why Ben loves them so much.

Maria's garments, on the other hand, were thick with a luxurious soft feel, won't need fussy pressing, are not just for summer. And Maria researches every so carefully I not only trust her, but if I have questions, she can tell me things about her products I didn't ' know I didn't  know. Like these Lithuanian linen fabric is prewashed with enzymes to bring out the softness. Don't be surprised to see me in a loose-fitting dress. Even the sandbags that hold down her tent down in the wind were beautifully made gray bags. I will photograph all when I get there early enough, hopefully next Saturday.

Last week was really a week of friends; I ran into Gavin and Jenny, also. Gavin is not making jewelry any more, and Jenny started easing up on her volunteer work. I do love them both; they are such lovely people; it was lovely to see them.

Today I have to get outside to do a little garden work to stop soil sliding down the slope where I already put in hellebores, knowing I was working backwards. But what's new. And then either some washing or more fringing.

I got seriously tipsy on virgin margaritas at lunch yesterday. That's what 60 looks like.