It seems a lot, and not much, happened in the 24 days since I last posted. Let's see how much I can remember.

"Syrie"
I had much doubts about the merits of "Syrie" but somehow I managed to keep an eye on the calendar so I started concentrating on the practicalities, which to me meant working backwards. Gotta love the Mitsuhashi pragmatism.

First I made the warp. Because I am so bad at predicting how far a ball/cone goes, I wound one color until I ran out, then counted the number of "ends", wrote it down, and moved on to the next combination. "Combination", because one "end" usually consisted of thicker cotton or shiny silk plus my standard 20/2 cotton merc, in pairs. And if they are tiny, I'm not going to worry about knots. I designed the colors so I could put them in order from one end of the raddle to the other. Around this time I settled on roughly 24 inches in the reed; the wider the better for the look of the work, the narrower the better for weaving, so a compromise.

Then I started to worry I didn't have enough yarns for the warp, (I didn't) and dug further into silk and non-default-cotton boxes, which skewed the initial color distribution. I could rework the colors in the reed; a no brainer in my head, but no in my hands. I also decided on twill, (familiarity!) and 20EPI would result in a slightly stiffer than my usual cloth, and acceptable for the purpose. (The last one was more hoping than knowing.) Making the warp took four days, between two and four hours each day.

Then I sleyed as I combined the colors, knowing pulling the 21 meters on the warping mill though the reed to the back beam is going to be the toughest job in this project. Already different yarns were hugging each other, twisting, or going way astray. Also, I started diluting the original idea, as reducing the project to maybe one rectangle much like a pillar, but in red. It took me three days to sley.

As the RAW deadline approached, I pondered dilution vs postponement. This was a hard one as in the old days I managed to always make the deadline, delivering products undiluted. And I have to say, they all turned up OK to the best of my ability. But this idea, "Syrie", has lived inside my head for so many years, I didn't want to dilute it. (I also contemplated submitting one rectangle to RAW and then complete the initial project and submitting that to another exhibition.) Submission due came and early in the morning I emailed Lloyd to say I wasn't putting this project in this RAW, to which he replied, maybe next RAW.

Since then I've been carrying around the best books on tied weaves from living room to bedroom to basement and back up again without studying them. I don't want to rush this, I want to savor the making like I did "Pillars". But this is the next to go on the big loom.

Stuff - (edit) In this long post, this is the least consequential part.
Since then I've been tying up loose ends, so to speak. I've culled collage material; evacuated all art supplies but what I need for the daily abstracts from the living room, then reorganized art supplies, (I still have lots, but I've also used up lots.) I finally finished touching up my Santas and all that's left is the clear coat spray. 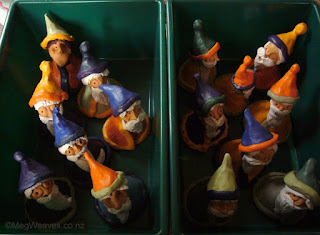 And while I had the paint out, I painted some cones green, another Christmasy idea I've had for ages. 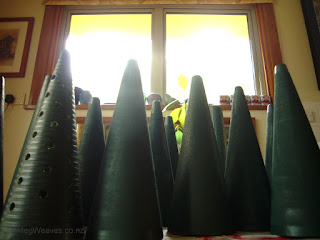 One particularly ambitious day, I mended/patched six pairs of pants, including four pairs of our gardening pants, after having put in 20-person-hours between the two of us over Easter. (Ben's outside again just now.) My sewing machine is so unpredictable and it did this instead of triple zigzag and I wished I knew how that happened; it looks a little twilly, a little like Christmas trees. 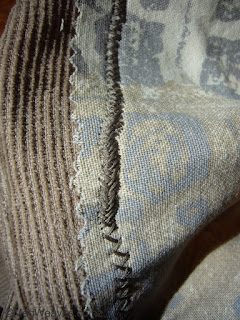 Winter arrived rather suddenly on Tuesday and it was a good thing I booked to have my chimney cleaned on Wednesday. I washed the tiles all around the wood burner but the young chap left soot and ash, didn't clean the glass and didn't vacuum. I used to have it done in spring/summer, but once a neighbor told another neighbor he saw fire from my chimney, so I've been delaying calling until end of summer, which usually gives me two months waiting. But they do a much through job early on I'll resume booking early summer.

I made a mess making the chain out of Esther's warp, so I put it back on the warping board to even out the pulled bits.

That's all I can remember but I've been ironing a lot of Ben's shirts considering: he had three days off the week before Easter, replacing the dashboard of the candy car himself, and we spent the Easter holiday, (and he gets Tuesday off, something to do with NZ educational institutions,) either in PJs or gardening clothes. And already I have several in the ironing basket.

Cleaning out our closets and sorting/stashing my books are on my list. I almost started on my books last week, but I think I have weaving on my mind for next week. Though at the pace of a blind snail in the middle of the dark and stormy night, (remember I was going to bust my and mom's stash before 60?) I have been reducing my yarn and art supplies and there have been reorganization, being combined into a large box or split into smaller boxes, but that work and retrieval has been almost impossible with books that spilled out of bookshelves. Again. Not to mention there are few under the bed. Again. There is going to be a wine and book party here this winter.

The Suter
Yesterday was the last of the ten sessions of art class. The last two were spent trying to replicate, (and I mean copy, recreate,) an uninteresting-to-me landscape painting in acrylics. I felt physically sick and almost walked out several times each session. For yesterday I even prepared a van Gogh self-portrait, (with the ear bandage,) to work on but Mark put so much emphasis on replicating the colors I felt physically uncomfortable.

Still, I learned some stuff; it's one thing to be told with acrylics you start with the dark colors first and pile on lighter colors; completely another to try it; the old masters had superb dexterity to create precise paintings with tiny brushes; I tend to pile on acrylics thick, and Mark showed me how to blend with a dry brush.

Still, 90 minutes feels rushed, especially considering my transportation difficulties, making it either an all-day-in-town day or I have to take the bus home, which isn't a big deal but I'm lazy I'm making it so. I feel ambivalent about the course's match with me, though I'll miss nice women there I've come to know a tiny bit. And Mark is a New Zealand-nice chap. (You heard it here first; I coined it, like Minnesota-nice, but blokier,) but he loves New Zealand landscape paintings, really not my cup of milky Earl Gray. I'm not going back to at least the next session. 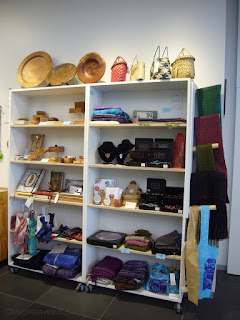 I took a shot of the Suter Shop's "textile" shelf two (?) weeks ago. The right half plus some used to be filled with textiles. I'm not sure if this is the change in their priorities I've been "seeing" or if other textile artists are withdrawing. They had four of my pieces on display, which shocked me because it couldn't be that they sold the rest, could it. But they had; they sold three in March, and I withdrew one, but I didn't know this until I got the paperwork later.

I had asked to withdraw everything anyway, however, because going to class every week and walking past the shelf, I was getting so tired of looking at the same old same old every Friday. In the end I left behind one small cashmere basket weave piece and brought home the rest.

I asked Ben what he thought about my volatile feelings about the Suter Shop, and he had a great idea: put in-your-face, art-gallery-ish stuff only at the Suter, and put "normal" "garment" pieces elsewhere or online. This made so much sense; it suits the venue these are things we look for in gallery shops; and it suits to differentiate my stuff there vs elsewhere. So I'm going to work really hard to make more of the clasped weft pieces in saturated colors.

I did one day, and managed 28cm. The thing is, I weave standing up on the four-shaft, (the breast beam is too high and I have to press extra hard on the treadles to lift the shafts while seated,) so I have to bend down and find the sweet spot on my glasses to clasp wefts. It's hard on the back and I manage 40cm only on a super good day. Yet I don't plan to charge that much more, if any, than other cashmeres of similar sizes, for now.

Because Ailsa the shop manager doesn't work on Fridays, Glenys, another long-time friendly person, (which in my mind, rightly or wrongly, makes her textile-friendly,) took care of the withdrawal. And by the way, she asked, did I know anyone who would be interested in a tapestry loom?

Opportunely I was scheduled to have lunch with Pat so I asked her what to look for in using a tapestry loom to weave cashmere scarves. Besides the fact it's two shafts , i.e. all plain weave, we couldn't find too many minuses.

And virtually no loom waste. At the very least I'll have to have a look, won't I? 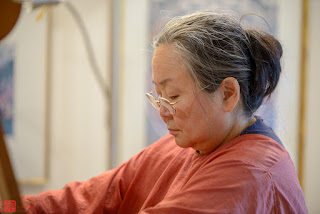 Ben got himself a big zoom lens for his birthday. He took this while I was finishing the black merino/mohair warp, standing a meter or two away; it's so clear and shows everything, I was honestly surprised.