I'd be a troll in Discworld because I function decidedly better in cooler weather; I can think better and do stuff. It's a bit sad if a productive day is a cause to celebrate, but heck, it's better than so many things.

I even have a different pattern of insomnia now; I wake up a couple of times a night, but after a short while of reading or even screening, I fall back asleep. I'm reading more printed books, and can manage some winter evening projects, like knitting or needlepoint.

One major reason for my mood upbeating, (didn't want to say "upbeat mood", which limits the upbeatness to here and now?) is because Ben's return to garden work. We used to work outside together. Then he didn't. Then I started on my own, only in the cool seasons. Then I didn't. But it is so much faster, Ben can tackle bigger/heavier/deeper things, and we discuss the garden beyond him speaking theoretically and my disagreeing from experience or due to practicality. And if a cute, mideum-sized skip is all it takes, I'm happy to invest in hiring it  several times a year; it's equivalent to my selling one large piece!

In fact, all the work we put in over Easter lifted the myriad of diabetes/depression-related clouds we've had since our first encounter, which started on Feb 5 but now I can't remember if it was in '02 or '03. I feel I have some control over portions of our lives. Good, eh. 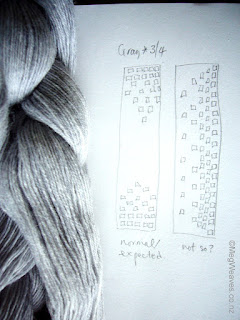 Re. composition, for the next gray project on the big loom, in a tied weave with which I'd like to familiarize myself, I'm thinking of the vertical version, only because the first idea inspired by Stella's cuffs was horizontal. Truth to tell, I think I've seen both versions online, the vertical looks fresh and new to me. Vertical may cause havoc with tension/shrinkage due to warp ends on one side of  getting more workout than the other. Humm. Silver, white or mid-gray of various fibers in the weft; not a wide piece. 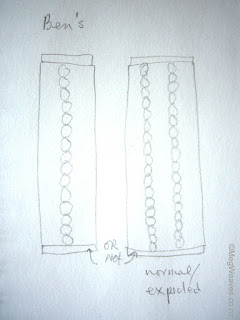 One night while crocheting a boring but useful piece, now done, I got the idea of a narrow knit scarf with one big cable going up the middle, rather than two skinny one climbing up symmetrically, which is how I tend to think of cable knits. And after four or five false starts... 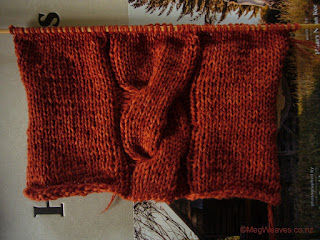 I'm using four strands of two colors/two styles of my weaving cashmere. It's going to be a nice wee scarf, so light and soft, probably warmer than woven because of all the air pockets.