Insomnia to the Rescue

Last week, I did a lot on Monday and Tuesday and by Wednesday I was exhausted and it lingered until Thursday. So this week on Monday I did a little housework and a little weaving; on Tuesday I did a little weeding, (I carried a kitchen timer so I wouldn't overdo it,) and wove quite a lot. I'm halfway done with the slubby silk piece; it's going to be 180-190cm in length, a little shorter than I wanted it to be, but an acceptable size.

On Wednesday, I didn't feel sick but I had been reading a fun book for kids, "The Traitor and The Thief", by an Englishman based on the North Island here; it's my favorite kind of book that takes me to a different time and place and let's me live the experience. And I finished the book instead of weaving. Later that night I went to bed and read an excruciatingly boring ketogenic cookbook. Maybe this is why I couldn't asleep, so I tried to plan practical steps/tasks for "Syrie"; it went on too long for comfort, but I did see what I needed to do next, got up surprisingly energized. 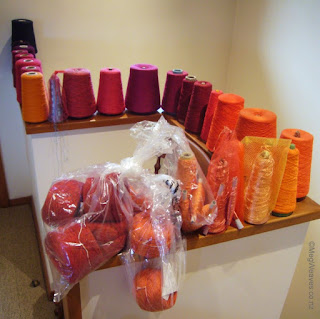 I placed "Syrie" warp candidates, cotton and silk, where I usually put warp candidates. To the left of the pale blue silk towards the wall/door are wool I'll use as wefts. (The pic shows a lot of oranges, but some are serious reds.)

I painted strips of 5cm-wide drawing paper so I can make 1/10 size mockup. I remembered I did the same thing with the "Pillars" was I was making 15cm and 18cm people, but I couldn't find a pic posted here. That one looked like a failed diorama homework by a disinterested second grader done in fifteen minutes, but it did give me a good picture. It had the corner of the large gallery at Refinery to scale, and I hung some gray paper 1/10 of the size I had intended to make, with 150cm and 180cm-tall "people" looking up. With "Syrie" I don't need the gallery, but I'd like to try a few variations on the final form/shape.

A good mock up will probably be what I submit as my proposal because 1) there is no way I can weave the whole thing by my birthday, but more importantly, 2) submitting a big red floppy leek can't tell the committee much but the mock up will provide a better idea.

I must read about free-style and tied weaves right away so I can superimpose windows on "building/s" woven in some kind of Syria/Muslim-inspired motif-based pattern, something I can manage with 16-shafts. Boy, I wished I had more or a Jacquard to make Arabesque/flowers and vine design for this. Anyhoo, the Klick is ready for some sampling.

I also made Esther's Birthday warp while waiting for the red paint to dry; it's in four grays and black. When she came over to have a look at my cashmere samples, she liked conservative/traditional twills, especially achromatic. I can do that.

I've convinced myself "Syrie" is going to turn out crappy even before I made the warp. I've been wondering why this is. I've given up projects when I can't be bothered, but I've never had this foreboding causing reluctance/hesitance. It's probably because I'm usually too busy working out the mechanics and due dates are the biggest worry. I work while I imagine the piece looking just the way I see it in my head, and then come face to face with my technical weaknesses and, whoa, reality and sometimes dispair hit me, and I complain, and blog, and then move on.

I never worried "Pillars" would turn out badly. There were no rude surprises with that project, and although I didn't know exactly how it would look until we hung it in the gallery,  I was confident I would like it and it would look good in the exhibition.

I don't know why it's so different this time. Is it because "Syrie" is similar to "Pillars" I see it as Version II, (even though its origins are different,) and that I'm cheating? Do I find my approach or vision facile or immature/underdeveloped? Have I learned too much about textile work in exhibitions and my ideas don't meet my expectations? Is it my technical skills that worry me?

Or is it the magnitude of what's happening in Syria vs my audacity to borrow their fate as "inspiration" to make a few pieces of red cloth in my cushy First World basement and put my name on it instead of, as if it represents any kind of... what... reality? I don't know, I don't know if I'll ever know. But making this feels better than not making this, so I'll stay on track for now.