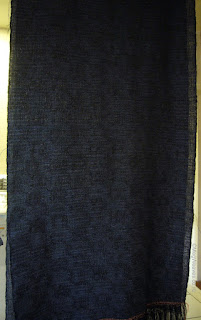 I'm eight days behind my vague schedule, but I finished the first piece today. I like it and sincerely hope wet-finishing won't change it much. I like the proportion and the sheen, and woven in smaller scale and bright colors, I can see how the draft can be so cute as pansies/hellebores pieces. I was going for 240-270cm, but quit at 239cm because I would have had to prep another prin, and I wanted to get to the second piece fast. I hope it's long enough; if I put it in the Suter, I'll have front of desk staff Kirstin try it on; she's super tall and she can give me a picture of whether it's a good size for my idea of how to wear this. Sorry the pic is so dark, but it's a really dark piece and I finished around 7PM so this is all the light I had.

I started the second piece using E as the weft. It's slubby, not boucle, and after wet-fishing, the warp almost gets sucked into the sea of pale-blue-green, (lighter in value than in the pic.) As a weft it's too thick in places so: 1) there will be some unseemly long warp floats, and 2) the draft will be elongated warp-wise. But I also have good reasons: 1) I want to try some textures in my weaving, and 2) I think the piece will have that luxurious, hefty silk weight. When I stayed at Kaz's in 2014, she let me try one of her big silk pieces, (sorry, I couldn't find a good view of it on her blog,) and not only was it bright and beautiful with lots of purple, but it had that familiar weight of silk one feels when putting on a good old kimono. This won't be anything like that, but I wanted to give it a go, something different from what I normally make. Above pic shows two "rows"/units out of 16 in one weft repeat.

I am eight days behind my vague schedule because I had that "whatever I make will be meh," thing and I couldn't be bothered with "Syrie"; I wasn't feeling well Wed/Thurs; I didn't want to go to art class on Friday, but I wanted to see a doco about a Swiss/New Zealand jewelry maker Kobi Bosshard with Esther, so I went. And it was good: art class was about colors, and although I fudged what we were supposed to be doing, (making one grid of warm-to-cool colors, another of analogous,) I made some nice colors with paint labeled as student arcylic, but behved more like gouache.

These are test sheets before I filled my grids; dark blues were much on my mind. My warm-cool grid turned muddy and I didn't even attempt to finish the analogous.

The film was superb, and I'd like to go see it with Ben again if we have the chance; before that, lunch with Esther was good because we talked about art vs. craft, concepts/ideas in making, and the fear of failure; after the film I saw Changing Threads, (varied entries, some superbly crafted, some with good ideas, but the show as a whole felt sparse;) I went to Volume to pow wow with Stella and Thomas; and the day ended with Ben and me at the Vietnamese restaurant. And somewhere between playing with colors and talking with Esther and learning about Kobi, I got a bit of my mojo back, so "Syrie" is back on again. Except I only have 21 days left to at least come up with a sample.

I feel better, but not completely, which makes me grumpier than the usual grumpy. I'm wasting so much time. If not working, I'd like to be weeding and tidying. Cicadas have long left and the sun and air have turned autumnal a couple of weeks ago. JB and Ali left Nelson for Germany last week so summer is truly over, and we get a very late delivery of firewood on Thursday.