I hear today is winter solstice; not my favorite day not because the day is short, but it marks the halfway point of winter, my preferred season. Although it will often get colder and frostier from now some years, it still means evenings grow shorter and we head towards the warmer, sunnier season. We're also supposed to plan garlic today, but I haven't yet pulled out cornflower from the veg patch because they are still flowering! 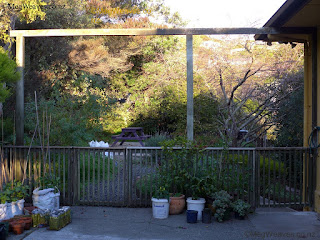 We've lived in this house for 23 and a half years, but the gates were closed just once for a few days when a bullmastiff roamed our street. It was an old, gentle dog, but always accompanied by a hyperactive boarder collie mommy and pup. One day a few summers ago, I was inspecting three cashmere pieces spread out on the floor and heard heavy breathing; when I looked up I saw the two border collies bouncing on the carpet followed by the big guy making sure nothing bad happened to them. I left the gates open after that because I learned they just jumped over if they wanted in, but the doors remained closed no matter how hot the day. And it was a particularly hot summer.

These gates were closed a second time for 49 days during Level 4 and 3 lockdown. 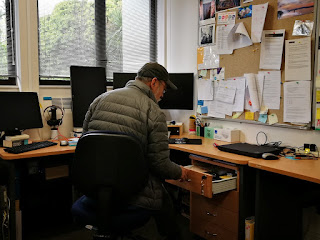 After 86 days at home, Ben went back to the office last Monday. This was taken on Saturday when we brought his equipment back to the office. This has been the longest we've been together 24/7, (except a couple of solo trips Ben made to the PO Box,) and a dress rehearsal for retirement. I'm pleased I didn't interrupt him as much as I thought I would.

On June 9 we started the second week of Level 1, meaning within our national boundaries our lives are back to normal. The best thing about Level 1 has been being out of Level 2, a most ambiguous stage where folks did whatever they liked. We opted to be on the cautious side, but every time we stepped out, we realized we were a small minority, but at times even I slipped up. In Level 1, we still do a few things:

* Keep record of where we've been, either electronic tracking app or by writing down;
* Wash our hands;
* Stay home if sick;
* Seek medical help if we develop flu-like symptoms;
* Self-isolate if instructed by medical professionals.

On June 16, after more than three weeks of no new/active cases, as we started the second week of Level 1, two Kiwis returning from UK tested positive. We were always ready to have folks returning from overseas test positive, but the great trans-island escapade of these two on "compassionate leave", two others "going missing" after a day pass to a funeral, and oh-so-much other sloppiness of  border control and lack of testing became apparent.

As of today, we have seven active cases, all related to returning Kiwis, including, worryingly, one baby. "Compassionate leave" has been suspended; Jacinda swiftly put a retired military man overseeing returnees' isolation; and the ministry is now doing testing they said they had been doing. We may get more cases with increased/proper scrutiny; I hope no clusters emerge from asymptomatic returnees having been released and being out and about.

At the start of the lockdown, I connected with different people in different ways; I even imagined I might develop new friendships. But as we progressed in our respective stages of lockdown, we seemed to have felt more comfortable in the new normal and less in need to connect; replies became delayed/scarce, and I also owe two friends emails still. It appears gradually we've all gone back to our old/normal-time friends.

Sometime between Level 3 and Level 2, I felt my adrenaline drain out. I don't know if the lack of clarity of rules caused it, or if I got used to unpredictability as norm, but it was definitely a physical experience. I had never felt anything like that before.

We went into town last weekend, and it was kind of disappointing how quickly we forgot about our rules and precautions; we brought our purchases into the house straight away, and didn't even think of washing our clothes and jumping into the shower before coming upstairs to our living quarters. I have to make myself wash my hands the correct way every night just so I don't forget how.

People around town appeared likewise. Thomas at Volume lamented we smiled more at strangers during lockdown,just to stop and yield to maintain physical distance. Nobody does that any more. People appear so busy. It's as though, for many, the lockdown didn't happen, or they prefer not to be reminded of it.

I myself haven't made new discoveries, gained new insights, formed new habit nor included/began something new in life. That was a little disappointing at first, but it being me, something might materialize later.

If I must come up with something, I may be spending less time feeling guilty about what I should be doing and just do them, or not do them. It's as if I've deleted an unproductive layer in my thinking. The agapanthus removal, for e.g., has been going on forever because I've been working on it so sporadically, but I'm pretty sure it will get done before spring. I feel similarly about a lot of my projects and have been able to get on with whatever I am doing on the day. I'm not sure if I'm getting more, or less, done, but it's so uncomplicated, and I hope this is a real change.

I'm really into Indian cooking à la Little India, a popular New Zealand restaurant chain, at the moment. I've carried their cookbook around the house, read a couple of recipes, trying to learn their use of spices. I enjoy taking half a day to cook dinner, and because I've been following recipes, I'm getting better results. I'm also baking sourdough bread again, after we were ever so disappointed by a rye loaf from a fancy bakery. I make just one loaf a week, but I'm concentrating on rye, Ben's fav, and spelt, mine. Bread has always been difficult for me, though, and we've been getting varied results. But seriously, we should ease up on carbohydrate, especially after our consumption jumped up during lockdown. That's harder now it's colder and neither of us feel much like big salads for dinner, but we've been conscientiously making kumura mash and riced cauliflower, and Ben's been keeping a steady supply of coleslaw. 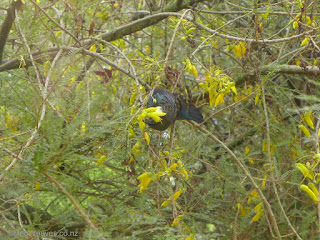 Last year my jaw dropped when I saw three tuis on a miniature Kowhai outside my stash room. Yesterday we had four, with more calling high above. Many appear smaller than usual, but we can't tell their sizes accurately because when it's cold or windy they fluff up to about three times the size. One tiny one likes to travel and snack solo, and stay well away from others feuding. At least two larger ones like to pick on a (particular?) small one not only while snacking but all over the sky. We had such good shows and some good pics, but Ben decided this morning he had enough of them and needed to do other stuff. :-D

I feel strangely grounded being preoccupied by these birds. I just wished the garden was in a better shape, but I'm pretty sure it, too, will be prettied up a little before spring.
Posted by Meg at 6/21/2020 09:59:00 PM