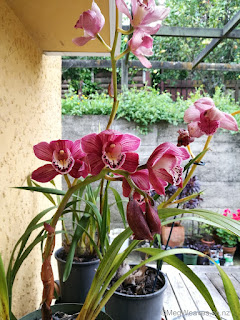 Day 14+7+50, October 27. 74 new. Cases are popping up in Auckland suburbs where hitherto there were none. The bigger news was 59% of population and 69% of eligible NZers have had two jabs.
I wanted to keep threading, but instead I made myself useful moving around the house doing housework, and repeating that one stretching exercise several times an hour, so my body feels lighter, (figuratively... metaphorically... ummm... you know what I mean...) No cream, no painkiller. Now I'm getting annoyed I can't think of anything that brought it on suddenly. Pebble sifting and washing??
I've been looking at this orchid for several days because the last, smallest stem with buds weren't doing anything. Even on Monday the buds weren't even plumping up. Then suddenly this morning I found these guys. I bet they thought I was paying too much attention to the tulips and ignoring orchids. Very late for orchids at our place, though; they usually bloom in Sept/early Oct. 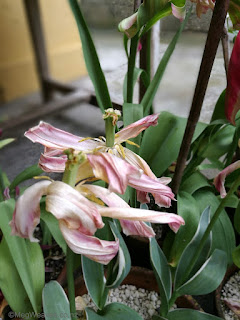 Day 14+7+51, October 28. 89 new, including two in Christchurch, reminding the government there is a South Island. 1PM update by Hipkins and Bloomfield: A woman, 50s, travelled to Auckland for five days for legit reasons; tested negative before returning; came home on Oct 15; she and a male, 40s, in the household, a truckie, developped symptoms, and tested positive last night. Both unvaccinated; didn't scan, but apparently cooperative; truckie has been around Christchurch and north of. They felt sick and stayed home, so Christchurch stays in Level 2. Nine new locations of interests, supermarkets, dairies and takeaways; one close contact in Otago. Meanwhile, all concerned in Blenheim tested negative; no locations of interest.
The government is between a rock and a hard place. Not only opposition, not only athletes, (very powerful in this country,) but now the very wealthy are now getting a lot of air time. But I agree with the government on one important point: we need to up the vaccination rate some more first.
I got up slightly sore, but was able to move right away. Phew, back pain lasted only two days; three if I count Sunday. Now I'm perplexed why, trying to remember if I always had ideas about the causes. I'm also still taking loads of tulip pics, and they really are lovely at all stages. Petals look like soft fabric blowing in the wind. Most flowers are now in stages similar to myself. 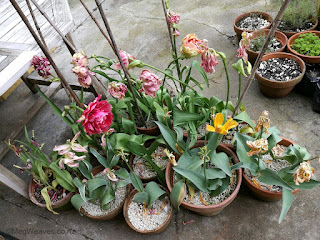 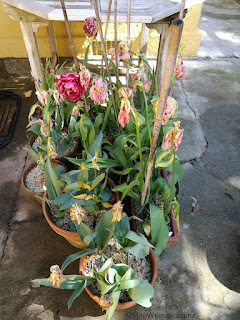 Day 14+7+52, October 29. 125 new, including two in Christchurch/Canterbury linked to yesterday's two. We had quite heavy rain overnight so this morning, everybody looked like they'd just come inside, out the rain. No more hair blowing in the wind. 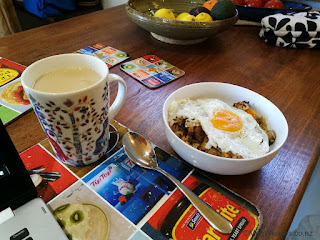 Day 14+7+53, October 30. 160 new community cases, including one in Canterbury. When the current lockdown started in August, something like 32% of New Zealanders over 18 had had two jabs; today, 61% of all New Zealanders, and 71% of above 12, are twice jabbed. I know this is the number the government would like me to focus on, not that I heard from them. :-D I'm also trying to learn the difference between the geneologically unlinked in the third graph here, (358) and mystery at the very bottom, (335), because doesn't one of these, or both, tell us there are more sleeper cases, or at least that we haven't got the whole picture?
Yesterday I was weird-tired and managed very little, but today, without rushing, I got quite a few little stuff done, and managed to watch a beautiful film, "Night Train to Lisbon" as well. A few days ago we also watched "Tortilla Soup", predictable but another beautiful film. We found both on Kanopy; sometime during or after the last lockdown, our monthly allowance was reduced from 10 to five, but before this lockdown Ben managed to reinstate his library sub, so we now have 10 between us, and though he watches a lot of weird SciFi, it's been much appreciated.
OK, I'll go back to threading. 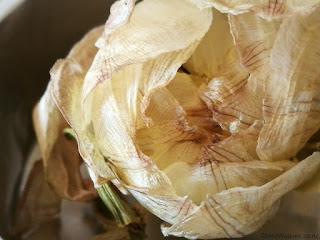 Day 14+7+54, October 31. 143 new; no new cases in Canterbury or anywhere on the South Island; the one case yesterday was historical. 61% of population and 72% over 12 double-jabbed.
Even though the black forest brownie was, oh, 8/10 in goodness, even though the dinner salad was ho-hum, I've managed to soak Borlotti beans successfully for cooking tomorrow, :-D, and the kitchen is clean, and so much laundry done I'll have to look around if good-drying weather continues, and one more short spurt and the threading will be done.
Every time this year I contemplate a goal for the following year of reading x number of printed books in y days, but that's futile because some books are long, many require extensive looking-up of images on the computer, while for others I have to write/amend list of names, info, and how they are related, fiction and non-fiction. But I do have oh-so-many interesting books, all of which I start the minute they come home, or even before in the car as I wait for Ben to finish work, but often don't finish because there is often a newer, shiner book arriving. Banning more books in the past years never worked in the past. I need a cunning plan. 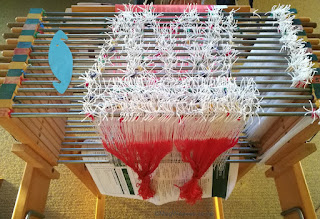 Day 14+7+55, November 1. 162 new, none on the South Island. 62% of population and 73% over 12 double-jabbed. Waikato is moving to Level 3 Step 2 (Level 3 with picnic, and some retail, but not eating out, not even outdoors,) this Wednesday; Auckland expected to move to said Step 2 next Wednesday; the rest of us remain in Level 2. While the government expects daily positive cases to hike up to 200/day this month, they are also cutting back the updates to three a week; one from Jacinda, another from Covid Response Hipkins,  and another from Finance Robertson. They are openly talking about living with Covid now.
Whateva.
I finished threading today, and now sleying, (easy,) but afterwords will pull out the warp forward a little to improve the tension difference. I forgot how tricky 60/2 get when in combination with 20/2. Also, check it out, no heddles left on Shaft 3 and 4; after this sampling, I might rethink heddle distribution on this loom if I'm going to keep working with tied weaves. 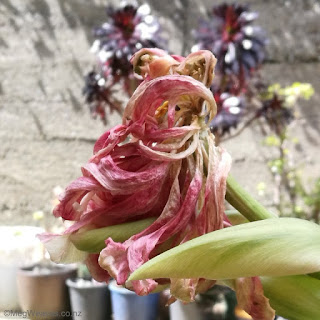 Day 14+7+56, November 2. 126 new; none South Island. While that part of Waikato held back move onto Level 3 (picnic/retail) tomorrow, northern part of Northland had two unlinked cases and will move back to Level 3 (no extras,) pending review next Monday. Vaccination rate remains the same; 62% of population and 73% over 12 double-jabbed, so not enough increase to make a difference. Also, last night there was a fire on the roof of Christchurch waste water treatment plant; the footage was pretty dramatic but it was contained quickly.
There are convolvulus vines on one good-size camellia tree needing removal ASAP and I can see it every time I sit at the kitchen table. Today I decided even if cutting the bottom of the vines is the only thing I do, I'd do it. But the sun had taken on the glittery summery look; overnight "low" temp was "high"; and the day was warm from early on, so I dithered and baked bread, (because sourdough waits for no one, and the oven is never as hot as the sun.) But in the end, bless me, I did go outside.
It was so hot, I started to feel woozy in half an hour. The said vine work was under/inside the camellia, i.e. shady, but the seasoned ditherer that I am, I kept doing "one more thing" with pots and seeds in the sun. I took a few hydration breaks, and one long tulip photo session, but finally, finally, moved on.
I'm a methodology nerd; I tend to plan and revise plans before I get on with it. An art teacher once said it's a weaver thing. The problem with this camellia tree is it's a third of the way from the left, or two-thirds from the right, in a large weedy patch usually considered the Big Hellebore Patch. Routinely I weed from the right, (which is why I sifted and washed the pebbles the other day, because those steps lead to the right edge, in the hopes I'll reach the camellia in time.) Today I did the unthinkable and took out weeds here and there, cut away some hellebore leaves and spent flower stalks, in the let's just say non-shade. Gradually the temperatures dropped, cloud came out, gentle wind picked up, and my head cleared and I approached the camellia.
There are purple sage bushes in front of said camellia so I untangled them. Where I thought there were half a dozen early cheer bulbs I found half-a-gazillion, so I started to dig them out, (unfinished,) to get to the convolvulus roots. I also had to remove forget-me-nots, which will come back anyway. So, long story short, I did reach the camellia, but I have to clear the surrounds before I can get to heart of the problem.
Then unforecast rain came. Because I had my head under the camellia, I ignored the gentle drops for a while, but they got bigger and noisier, and it was approaching 7PM, so I called it the day. By the time I came out of the shower, the rain had stopped, of course. The way I'm distracted all the time, I anticipate two more afternoons on this task.
I have to clean the patio at some point and rearrange the pots because all the spring flowers, in pots and elsewhere, are finished. I have to put all bulb pots, including tulips, to dry for a while before I put them away. At the same time I should put in more summer seeds in the ground, but because our shady garden does everything about a month later than anyone else's, if I can get this done by the end of the month, I'll consider us on-schedule. Not that we ever are, but, planning, you know.
Posted by Meg at 11/03/2021 12:11:00 PM