Realizing I know nothing about turning Summer & Winter drafts, but having flippantly mentioned it, I descended into a wee rabbit hole for a few days. So far, I understand the logic, but not to my satisfaction, (more on that,) and decided for now I don't want to waste any more time on this as it doesn't directly impact the current project. But for the record... 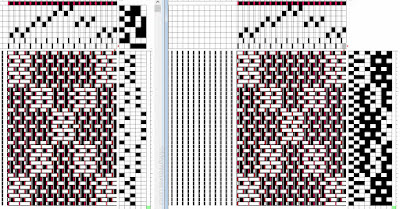 My software, Fiberworks, turned the draft for me automagically.
If you remember way, way back, my first entry into Summer & Winter was to make maximum use of the number of shafts in creating larger designs, and yet weave cloths with structural integrity. Looking at the turned draft, my reaction was, "It's straight forward, but must we waste two pattern shafts for every block, while in the original draft, one P shaft takes care of one block?" I thought I wasn't seeing something obvious and missing the point of turning, so I asked for advice on Facebook. And Cally Booker came to my rescue.
"Yes, sadly, we do. If you think about what the pattern weft looks like in the cloth, when it is woven 'normally' you get that brickwork effect because the pattern weft is tied down in one place on one row and offset from that on the alternate row. When the structure is turned, the tie-down happens in the weft on the alternating pattern picks. So one pattern pick has to tie down half the pattern warp and the next pattern pick has to tie down the other half - and that only works if the pattern warp is threaded on two different shafts. We can't economise on the ground warp, either, because we still need to make the plain weave base. Like most descriptions of weaving, that sounds like complete gibberish when spelt out in detail... I hope it isn't as bad as that."
Right, makes sense, but for me, unsatisfactory in that it's... wasteful. Although there is scope for experimenting with one tie-weaves.
"... Maybe someone will pop up and tell us we're both wrong! If you just used the one shaft per block, so that all the ties were in sync with the same weft pick, what would that mean for the rest of the structure? I feel the urge to go and doodle in Fiberworks..."
Cally also recommended "Supplementary Warp Patterning: Turned Drafts, Embellishments & Motifs" by Barbafa J Walker. I found it on Lulu.com, but I haven't heard back from Lulu whether books ordered from aud-store.lulu.com is shipped from Australia or the US, (aud=Australian Dollars,) because the US postal system stopped sending stuff to NZ or Australia a while back, and it's still effective as of November 19. Never mind, not vital for the current project, just a very interesting subject.
And it's great to reconnect with old friends.
Back to sampling.
Posted by Meg at 11/26/2021 03:43:00 PM