Finn and I talked quite a bit about the paisley motif, and how Japan is a tiny island nation at the end of Silk Road.

The next morning, I wanted to see something more of paisley, and may read its history. I went to the Special Collections section of the Auckland Library where staff member Kate remembered me from two years ago. This time she brought out the 1856 edition of Owen Jones's "The Grammar of Ornament", a huge tome, with individually printed color plates. I think the book is typical of its time, the author expressing strong subjective opinions; he reveres Greek; doesn't have respect for the Rome. He also focused on what I call the "oak leaf" motif but couldn't find any reference to paisley, but nevertheless sat with the book for six and a half hours reading the development of the leaf motif from Egypt to Renaissance, when I realized the library was closing in an hour and I whipped though the rest of the volume taking pictures.

Again, I can't post my photos because of an agreement I signed with the Library, but here are some images from the book; Kate told me an edition of this book came out "recently" and I bought it from England after I came home; this edition is tiny, and the details in the pictures almost not-discernible, but I am going to enjoy reading the outrageous texts.

Once again I did the bookshop rounds; I couldn't believe the spectacular sale prices at the art book specialist, Parsons, including relatively newly published New Zealand books. I was drooling, but I knew I had quite a few recent acquisitions waiting for me at home, so for the first time in several trips, I came walked away from the shop, after a couple of hours of oohing and ahhhing.

The last day in Auckland, Wednesday, Ben and I took a short cruise on a yacht in Auckland Harbor.

New Zealand is supposed to be a great sailing nation; most of our friends are artists and don't have boats, and those who do have never invited us, so after 16 years we bit the bullet and took a cruisey touristy cruise, (as opposed to the hard-working America's Cup cruise,) for experience. It was rainy, gray and not pretty, but the water was calm and we had great fun. 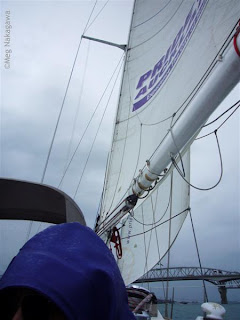 After the cruise, we picked up our luggage and got on the shuttle to the airport; it was the most dangerous car ride in the longest time, driven by the most reckless and clueless driver we've ever had in New Zealand, dropping people off in the wrong order at the wrong parts of the airport. He spoke with a thick Dutch accent, and most of us were quite unsure of what he was saying. We were cutting it the closest, but luckily our flight was delayed, so we made it on time. An interesting end to an otherwise lovely trip.
Posted by Meg at 10/01/2010 10:00:00 AM