It may astound my classmates from Randy Darwall's workshop but I took less than a dozen pictures during the workshop.

This is my "new" friend Colleen bubble-bubble-toil-and-troubling. 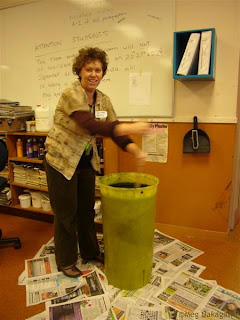 This is Yoshiko showing me how to cap my flowers. 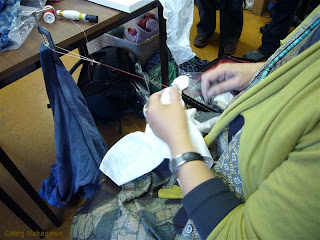 Here are pictures form Yoshiko's shibori workshop in Melbourne which took place a couple of weeks before mine, on Sampling's blog.

The day after the workshop, on Thursday, Yoshiko held a lecture at the School of Music introducing three Japanese designers. To me, it was somewhat of a diluted talk after the intensive three days, but I sat with Joan, (who drove up from Blenheim,) Esmae from Melbourne, Rosemary, (whom I met in Jill Alexander's workshop,) and behind Jo, (who attended the workshop with me). I saw a few other friends, and it was lovely to sit amongst textile women.

Maria, from the workshop and originally from Norway, brought up an interesting point after the lecture; that sustainable anything had to be examined not only from source and energy-footprint of the production, but at the end of its life; the discussion then turned to how, in that view, polyester was a good fiber. %$#@!!!

I stayed until Yoshiko and the troops left. She as rushed off, and again, I said nothing. Afterworlds I went to have coffee with Esmae and Joan, and later discussed with Joan some future projects I had in mind. I knew this was as good a closure to the workshop as I could have expected. But then as far as medicine goes, it doesn't get any better than Joan.

Friday morning I went to the last session of this term's drawing class. My head was exploding with ideas and plans and I wanted to take the last term off of drawing to concentrate. However, I had great energy in class, and the model, Gurli, seriously rocked that morning, I decided to stick with drawing. I already know that what I try and learn in my drawing feeds into my weaving. Hopefully energy flows in the other direction as well.

I met up with Rosie the Art Historian in the afternoon; I did my first indigo duty, (it looked great in the afternoon warmth) and then we had lunch in the Queens' Gardens and talked art. We later went to the Suter and stared at two drawings of women, one precise from late 19th century, and the other fluid and gestural in the mid-20 century way, and argued, mused, discussed, and contemplated them until closing time. She came over to my house Monday afternoon as well and we watched several DVDs and discussed artists' lives. And gardening.

I think perhaps I don't think enough about eco/sustainable/green/bio aspect of my weaving, beyond "I don't want harsh chemicals in my house." Jo introduced me to Treliske organic (??) merino during the workshop, and I bought a small cone to test. Let me just say, it's not cheap, either, but the communication with the company so far has been professional, and pleasant.

I usually rely on friends study and tell me what is good and what is bad for the environment, but with so much information and terminology thrown around, I know I should spend some time reading up at least about the fibers and dyes I use. Crikey, that's more time away from the loom.