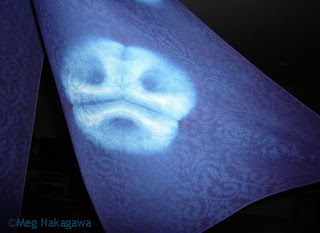 I've been in something of a tidying up mode now. I've put away all my indigo-related stuff. The last task has been to wind my dyed yarns into balls. I'll show them to you when I'm finished with the job, but this has been a totally why-do-I-do-this-to-myself exercise. More on this in a few days.

I finished reading "Freedom". Finally. It felt like a long novel, not because of the number of pages or words, but the first half was boring in the nothing-is-happening way, and the second half, especially the last 100 or so pages, felt rushed and undercooked. There were some insights on depression, descriptions from the not-depressed perspective I found... insightful, but which also made me more frustrated in how I'm wasting my life.

It's been a while since I also persevered with a novel where the entire cast of characters were so unlikable; (well, I have, two in fact, but these stories took place in Italy, so what can I say, I survived;) and this lot was fairly bad. I could not feel sympathy, empathy nor pity, and laster in the book they became more caricatures than characters. I also wonder if this is because parts of the three main characters are like me, i.e. they were described as depressed in different ways, and I didn't believed them, not all of the time.

So, why did I keep reading, you ask? Well, a lot of it took place in Minnesota, and at one point very early on, I felt like Franzen was writing his story in the way I very much imagine I speak, as if he told me this story and asked me to retell it, so I felt a connection to the voice I've never felt in any other novel before. (Alas, the feeling disappeared rather quickly.) And of course because "The Corrections" remains one of my favorite books, and I did enjoy "The Discomfort Zone" and Franzen is of my generation.

I weeded a small area we can see from our kitchen window; I estimated about 40 minutes for that area but it took four hours, and as if that wasn't bad enough, I was exhausted afterwards that I needed about four hours to recover that afternoon. Hayfever is in full swing, but the dust and the bugs bothered me more than I expected, more than my medication could help me, and at one point I was coughing like an old hag from a bad children's story.

I've got some ideas about weaving, and an updated To Do list with a few things I should have finished some months (if not years) ago. I had to go check something and was amazed that the last exhibition I participated was over 15 months ago. Either that or I can't even remember having participated in anything. It's really time to clean up my act and start living my lift.
Posted by Meg at 10/09/2010 01:24:00 PM