Last lot of the Walnut Husk juice dye, yesterday; well, this morning, because I didn't go downstairs to check until 1AM.

I am such a natural dye newbie I forgot the same solution can yield different colors from one lot to another.  I had this mature, seductive silver gray skeins in the pot, (like seals swimming in shallow sea,) but since I was looking at an already-gray yarn, I thought they were only wet, and wished if only the yarns would look like that when dried!  AND, I forget why I wanted to dye with walnuts in the first place: the lush silver gray!  That's what Doni wrote a while back, I think, and that's why I've been obsessed with walnut dyeing since. Anyway, the liquid looked the same muddy brown, and I kept almost boiling the yarns for half an hour or longer!

What I got instead is one warp of lame matted gray of Japanese-manufactured tweed wool, (the original yarn is much darker than seen here), 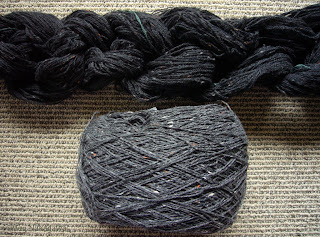 And two skeins of mature dreadlocks, middle-aged Medusa wig, or a spoiled cat's plaything; the yarn is the same Australian wool as the second picture yesterday... 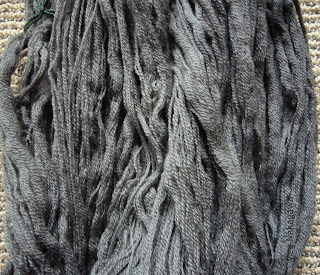 But I love, love, love the second color, I'm making three more skeins of this and trying again, keeping fingers, toes and eyes crossed I get the same/similar gray.
Posted by Meg at 1/08/2012 10:55:00 AM