Last Day of the Holiday

And I am expressly happy and a little bit sad; a little bit sad because today is the last day of having Ben at home but because one or both of us were sick with a bit-punchier-than-mild colds for the last 14 days, we didn't do anything special; we slept a lot, took turns taking over-the-counter cold capsules, and managed only a little weeding.  But we cooked and ate well with still one-third left of a cake I baked on Boxing day.  Controlled indulgence, folks. (Still my body remains an enigma to health professionals; with the amount of physical activities and a drastic change in my diet and portion for seven weeks in Japan, I didn't loose an ounce; it was thus when I worked out at the gym 3+ times a week 2006/07.)

Expressly happy (and a little bit sad) because I managed to start work on January 1; that I did this, and that I'm looking into new things bring a tiny but steady grin on my face.  "A grin, and not a smile,? I hear you ask; for now it's a grin, I can't explain way, but I assure you it's a good grin. 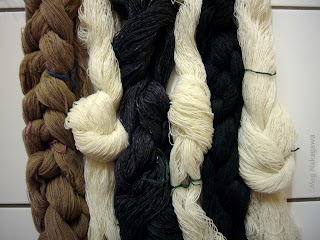 Because I want to include some hand-dyeing into my "real" work I started making short warps and skeins to dye/overdye first thing in the morning on Jan 1.  Though I had specific plans then, I keep changing my mind so I'm not sure what I'm going to do in the next few days, but at least I have these babies and a couple more waiting, and a nice dark walnut husk solution brewing as I type. I'm sensing that when one ventures into the world of dyeing, measuring becomes important; it's something I didn't do much while just playing around.

I have mixed feelings with my speed.  Normally I would have made these warps/skeins in a couple of hours, but this lot took me two half-days in three goes, and even then I had overnight more-than-discomfort-but-less-than-pain on both arms both nights. I had thought my Wonky Arms were temporary, that with care I'll get over it, but I've only just start to entertain the dreadful possibility this is for ever and I really have to learn how to control my body and work wisely.  (See me roll my eyes; it's so much easier said than done.)

Which, in a perverted but hopeful way, generates excitement because when one changes the way one works, I'm convinced, it changes what one makes.  In my case, I'll be an even slower weaver, but I'll spend more time with each piece, which has got to be a good thing.

Project 2: Trapunto Made Me Do It

Yesterday Trapunto gave us a link to Erica de Ruiter's taken on Log Cabin/Basket weave.  You might call it synchronicity, but this morning I was gazing at "The Best of Weaver's: Thick 'n Thin" and, lo, there are heaps of Erica's articles for weaving with less than four shafts.

True story: I've been avoiding anything to do with Erica because I think she taught in New Zealand, (and so I'm convinced it included Blenheim,) relatively recently, and though I was a member of the national guild, it completely went under my radar and I found out about it after she'd gone home!  I kicked myself then and I kick myself today that I missed this opportunity, and I felt sad every time I saw her name.

Well, no more.  As you know, my primary "production" (if you can call it that) loom is the four-shaft Jack so I'm always on a lookout for interesting four-or-fewer (preferably without pickup) ideas, so Erica and her articles are most definitely on my radar now.

Not Quite Project 3: Speaking of Trapunto
I think I looked up "trapunto" some time ago when I first "met" her.  But, again, the Goddess of Weaving led me to a picture of woven trapunto in "The Best of Weaver's: Fabrics that Go Bump", page 13, by Alice Schlein, and this is most definitely something I'd like to do sometime in the future.
Definitely.

I love "The Best of Weaver's" books and I have them all, but texture is not something I'm interested in weaving, (though I love it when others do it well,) that these two books I bought when they came out but never really looked at until this morning. That's got to be a good sign.

I started a wee, tiny non-project for the month of January.  It's laughable, but doable, so I'll show it to you on the 31st.