The Good, The Bad, and The Brilliant

Because of the title of the post, I'm going to be all over, but there we are. 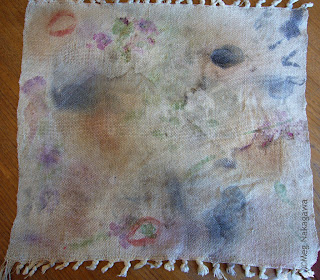 The Good: we had our Group R meeting today, and everybody except Ronnie brought it along.  (Ronnie's is buried in her garden for the time being.) This is Pat's; isn't it pretty? It's on her woven silk, but I love the harmony of the colors she piled on it without intention. 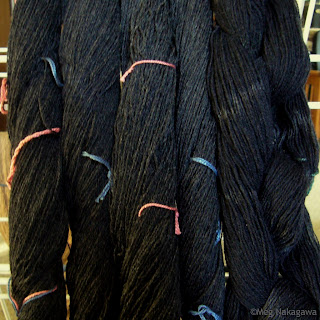 The Bad: the walnut husk dye continues.  I got all this from one ball of charcoal gray wool. I tried photographing this group many times, but the true colors won't show, so you have to trust what I say.  First off it's a darker collection than the photo suggests; the warp chain, far right, you might call black.  The original charcoal gray can be seen in the undyed part in the warp chain, but it was darker in real life. Dyeing turned it into a very soft black, like a warm, balmy evening when you can hear neighbors talking quietly on their porch swing if you listened.  I liked this result so much I made two more skeins to try to get  soft-dark charcoal, (the two in the middle), but they didn't turn as dark as I hoped.  One is slightly darker than the other.

Then I thought I would like to use up the rest of the ball and make two more skeins, fake-Ikat like the warp.  This time I planned the placement and sizes of the retardant carefully and tied much tighter than before; I also wanted the dyed part to be as black as the warp.

The gray isn't dark, almost the same as the previous two skeins, depending on the light, and the pigments went right though the cotton ties, even though I used the same cottons, just in different colors.  I'm not disappointed in as much as this makes more sense than the freak success of the warp fake-Ikat, but I am disappointed because I spent so much time preparing and I had wonderful pictures of fake warp- and weft-wise Ikat quietly creating a random and unexpected piece end result.

Just in case you were curious, I have a pillowcase full of walnut husks picked up from the ground last autumn and subsequently air-dried.  The pillowcase has sat in hot water since the start of this round of dye experiments, sometime late last year. My dye solution has fundamentally stayed the same, except on two occasions I added more water.  No chemical has been added intentionally, though there must be trace amounts of kitchen detergent, (from washing and preparing the wool,) and cheap white vinegar, (used in the final rinsing of wool; on two occasions, after the final rinse, I've thrown the skeins right back into the urn.)  As I say, mine is the crudest form of dyeing you can imagine.

The Brilliant. Back to Group R. Changing Threads paperwork is due February 17; National Guild exhibition, March 1. And I can weave only 15 minutes at a time, maybe up to three times a day, and since I have wanted to weave big. I've had an idea for Chanting Threads, (in another post, as I have to gather my thoughts before I can explain,) but had convinced myself it has to go on the same warp as the National Guild piece to save time, and some thinking was required to make the warp work for both. Will I have time for both?

Jo suggested I work into the piece the fact that I can only weave for 15 minutes at a time: weave, advance warp, weave, so there are bands of woven parts and length of warp left unwoven in between.

That is such and out-there idea for my making that normally I would reject it right away, but I've become quite receptive to ideas thrown around in Group R meetings, and in this instance, it works so well with the theme.  Brilliant. (Say it out loud like a English teenager - think Ron in Harry Potter.) Changing Threads being more conceptual than the National Guild exhibition, I feel OK about me doing this. I just need to work out the details, specifics, including how tight/untidy I want to make the woven parts.  Not just a pretty face, our Jo.  I almost wanted to come straight home and start working out the details.  And now I don't think the two submission pieces need to be on the same warp.  Maybe.