It started when Doni and I started pondering online stores recently, that we need strong "identities" to be successful in the ether, and color palettes are likely the most straight-forward way to establish such, at least in the first instance. (Doni, do feel free to chime in if my memory is wonky, not or later.) I found myself having to think back to where I started and how I came to be where I find myself now.

In the beginning, sometime between 2000 and 02, after I left my office job I had a very hard time imagining what it's like to "be" a weaver; I knew what route I wanted to take to learn and improve my weaving, but not working in an office, not working for an organization, boggled my mind. And lacking weaving classes in Nelson, I went to free small business seminars.

I wasn't sure if I saw myself or my weaving as a business, but I needed to learn a few things about tax implications and my responsibilities, and these seminars were as good a place as any to get structured guidance. But many other classes focused on marketing, and I cooked up lists, mind maps and gantt charts picking out my target market, the image my business was to portray, and narrowed down my products based on these results. I wanted to focus on "older" women as I also entered that group, and people buying gifts for such women; my products were to be "elegant, exquisite and expensive," and for that, I aimed to weave fussy, (as Jacquard-like as possible,) designs in good-quality skinny New Zealand wool within a very narrow range on the color wheel. I also had in mind Japanese silk for later.

Because I didn't/don't dye, my colors were restricted to what a few weaving yarn sources in New Zealand stocked, and many had, say, between five and seven colors, usually some greens, teals, wine/burgundy, and lighter blues if I was lucky. And the occasional mixes that may have included purple. The colors between sources, on the whole, were so similar if I got a merino from one source and possum/merino/silk from another in, say, teal, the slight difference in hue/value or texture created exactly the kind of "subtle" look I was after. So, though the hues were not of my choosing, the overall look suited me. And work in New Zealand colors sold relatively well in New Zealand. Imagine that!!

I met Wellington weaver Brigit Howitt at Bonnie Inouye's workshop in May 2002 and later that year, after having attended Convergence, Brigit sent us an email quoting one Randall Darwall. Some years later when I saw publicity for a weaving workshop by a man with a similarly long and difficult name, I signed up immediately; little did I know he is known for his use of colors! That's not at all he does, but it was what he pushed in his workshop. Oh dear. Using five colors was a big deal to me, but fifty?

Randy had individual advice for all of us, and mine was to be my own apprentice because nobody could give me a formula. Half of me wondered if he didn't know what to say to such a newbie, (everybody else in class had been weaving for 20, 30, and 40 years,) and if this was the catch-all advice; half of me knew exactly what he meant, and this is what I've been trying to do for the last seven years. And a month.

Over the years, I have been encouraged by friends and gallerists to try such recklessness as asymmetry and complementary colors and though it takes me a long time and perhaps more resolve than normal, I now routinely do these, as well as making warps without color or threading plans. I find I'm becoming less attached to my perception of my weaving, that I'm willing to give most things a go. I also tend to get bored quickly so I don't want to stick to one thing, that I need to try something unfamiliar from time to time. While in discussion with Doni, I even wondered if I have lost my thing, and whether I have no instincts about my colors any more. And I decided that as a developing weaver, it didn't matter. I'm more interested in challenges and enjoyment. 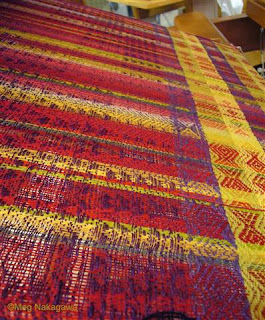 This is the third piece from the very vibrant warp; the weft is a medium-value silk/cashmere mix; though the purple appears dark, it doesn't overpower the warp but the luster in the silk lifts the hues and values in the warp collectively and individually. 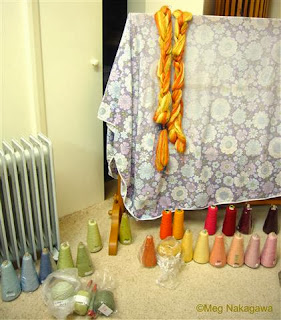 Here are the warp I made a month after I came home and weft candidates, and my first reaction when I gathered these was, "How stunningly boring!!"  I shall try to weave one or two sympathetic-colored pieces, and then one or two tingly pieces; I have enough warp for three. (My first floor loom came wrapped in the purple sheet!) 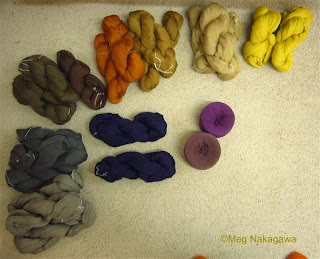 But wait, here are the fine wool skeins I bought in Japan in March, and I couldn't stop thinking about possible combinations and I started winding them in balls and handling the skeins in general in preparation for a series for the very near future. (The orange at bottom right are my new socks.)

For now my color palette is "all over", Doni, and my style, wonky selvedge. And don't forget the "slow." I am leaving you in charge of more intelligent meditation, but, oh, it's so fun stepping back and discovering that some of my biggest obstacles were but mere pebbles looking back.
Posted by Meg at 10/30/2013 07:45:00 PM