I had such high hopes for today, Garden Blitz Day 11; it started overcast and cool with precipitation expected in the evening, just our kind of gardening day. I expected I could get the veg patch done and Ben could weed most of the next patch, then we could prune tomorrow, and that's the end of this section which is the easiest part.

Alas, it started raining before lunch. We kept going awhile but it got heavier so Ben went inside for a shower; we were going to the hardware store, again, and the much-needed grocery shopping. By the time Ben came out of the shower the rain stopped, and it was like that for the rest of the day. We ran errands, we had to because we were digging into the last of frozen veg with only onions and garlic left of the stuff. But we forgot milk.

Today I put in three hours before the errand, three on errands, then two more in the garden, but managed only a third of the veg patch; I'm putting the empty part of the veg patch soil through a sieve, (remember my clover problem?)  and that is taking a long time, not the sieving part, but picking out the tiny bulbs and returning the very fine bark pieces back into the soil part.

Ben's home for five more days. At this rate, we would be lucky if we can get these two top parts of the garden done. Forget getting rid of the massive amount of garden waste we can't compost, (weed bulbs, vines, we need a garden skip,) forget the garage, forget any inside job. Just those two little bits. It would have been nice to have one whole day off, perhaps a late lunch and then the cinema, but we had a leisurely first week and this week have been working leisurely, and now we have momentum so we hope to keep this up. 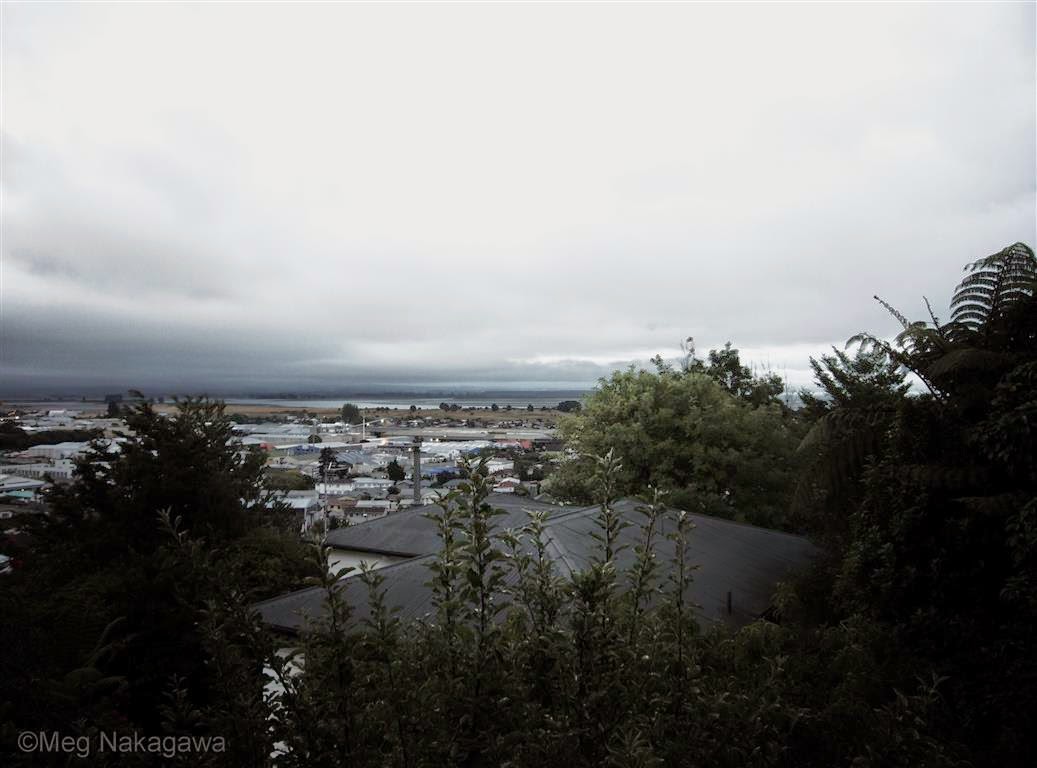 Which is very strange because the view in front of our house and behind us looked like this, actually a little darker, but we didn't get rain while Ben was cooking dinner; steamed green-lipped mussels. It felt silly, but I watered the one tomato, three basil and three lemongrass seedlings before I came in.

We also ran into Ali and John in the garden section of the hardware store; they split their time between Nelson and Germany living perpetually in warm part weather; it dawned on me tonight we could swap places so I could chase the cold weather. If only I liked smaller looms! Ali said she cannot leave comment here, so at least it's not just me. Nor her. I can't figure this out. Can you?
Posted by Meg at 11/25/2014 11:15:00 PM