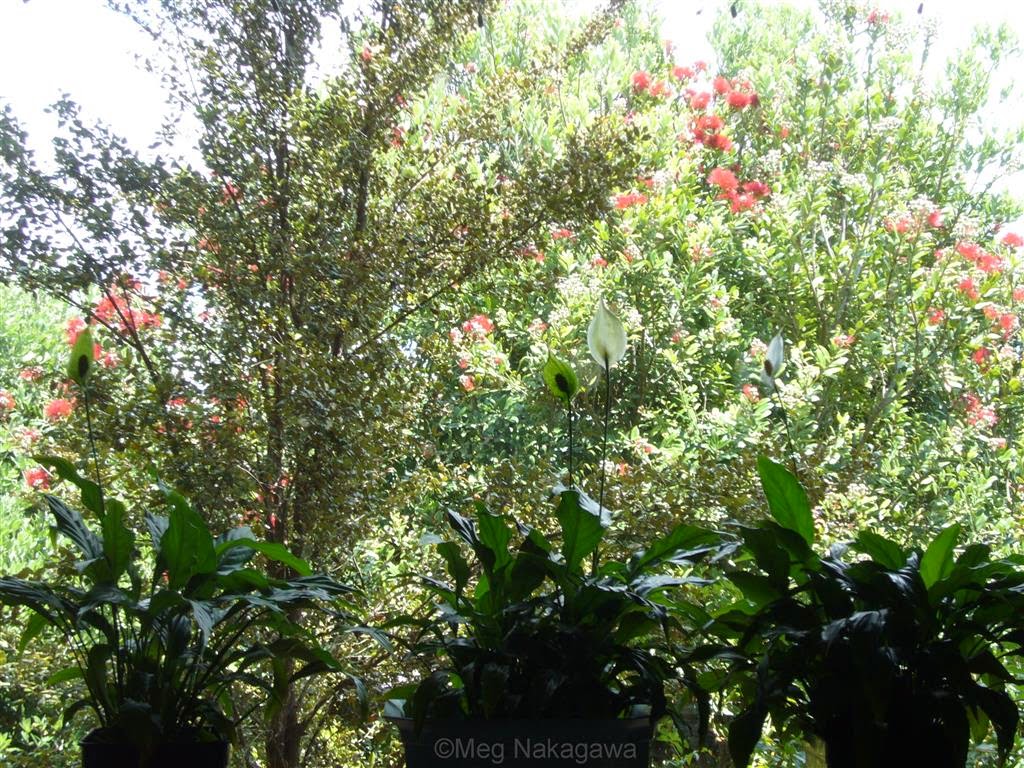 Today is December 21. These are our pohutukawa (New Zealand Christmas) trees. The right one appeared when we took out surrounding shrubs on Christmas Day 14 years ago; it was a nondescript 70cm stick but it looked alive and we recognized the leaf so we left it. The one/s on the left, which are in fact two to three meters taller, was/were purchased as 4cm/50-cent saplings from a dodgy-looking nursery in West Auckland in late 1995; they lived in various pots and a wine barrel until they reached two meters and had to be put into the ground. We cannot tell if one survived and the other died, or two are cohabiting nicely.

Some years these flower splendidly, some years not, and the last two years they couldn't be bothered flowering. When they do, though, they tend to have the best week in early to mid December. For whatever reason, this year they're going to put on a show between Christmas and New Year and I am intensely pleased. More flowers are opening every hour and I almost feel I need to shoot it every two hours.

The one on the right, and the shrub in front of the window, block our views to the west. I like the feel of living amongst trees, and the leaves block a considerable amount of road and airport noise, but Ben misses the view, and we do have quite an expansive view to the West, though increasingly industrial. This has been one of those "contentious" issues for a few years; a compromised, half-bottomed trimming may be in the plan.

Now I must ask you: would you like another Weaver to Weaver, albeit later than usual? If so, I'm thinking sign up by January 4, 2015, notification of swap partners by January 6, and posting of inspiration by January 31. I figured it's not exactly a bad time to put aside some inspirations this time of year.

Also, A Day in the Life Of Looms, Loomsday as Cally coined it will take place on January 1, 2015. Except you have to take the pics on January 1, so nothing to prepare here.

Today we've been wondering whether to go to berry picking today, (Sunday=crowded,) or tomorrow, (Monday=less crowded but possibly depleted). While sun, beach and berries sound nice, this time of year I sure miss Minneapolis. And even Tokyo's intensely-junk-merchandized, gross-over-commercialization of the season.
Posted by Meg at 12/21/2014 01:26:00 PM