I've been thinking a lot lately, at least I hope so; I hope I haven't been not thinking. My word-forgetting has gotten so bad I hesitate to go out and meet up with humans some days. I don't know if this correlates with not thinking, but that's something Ben's Dad hinted at when he started having memory problems. On the other hand, I've been providing some hilarity; a while back I couldn't remember the word, "marinade" so even though I knew it was the wrong word, I said, "kinda like 'mutilate'", and since then we've had a lot of nice mutilated meals.

It's marginally better when I type, especially because search is always there. (Well, when we have Internet connections, which has been super dodgy; a day with a dozen interruptions is now a splendidly productive one, but heck, it's not war or natural disaster.)

Then there is my worry that verbalizing, typing, and especially publishing on the internet, changes my thinking into different kinds of thoughts. Sure, vague thoughts sometimes transform into actionable bullet points, (ugh, management-speak,) but sometimes slight variations and nuances get lost. I can actually see, as I type, second-fiddle, third-, the whole orchestra fading away. I also some of the times I think I'm not I'm thinking, ideas are working out their own solutions, like elves planning a surprise party at night; I've learned to leave those guys along. I still worry when it feels like there's no thinking going on, due to my first ever encounter in my first ever philosophy class, (senior year, Washburn High School, the saintly Mr Ario,) having been with Descartes.

Some thoughts are returns/reincarnations/rehashing of old thoughts, many of which have been shared here before, and I don't feel compelled to repeat, even if I may be able to paraphrase them better. (Now, shouldn't that be "betterly"?) Some of these thought sound same-old even to me, and I also wonder if "recurring" issues/topics are all that paramount, or just a list of stuff I can't get over.

Which makes me routinely assess, should I keep blogging? It's not that blogging is a chore for me, I'm the only one I'm embarrassing, but with no new thoughts, no news, no new weaving, and blogging as a form of communication playing second- and third-fiddle to flashier, newer ways of internetting, is it still a viable method? Should I make Unravelling private and age gracefully? Why bother with the internet, why not a Word file? But here, the answer has invariably and inevitably been no. I don't associate with many folks in person; I've shed most social responsibilities so I can live in hiding, and occasionally I hear from you based on what I say here, so this is my umbilical cord to the world. Kinda sad, but this is how it turned out, for now.

I've thought to volunteer in town, something refugee-, art-, or third-word related, but every time I give it serious thought, I pull back, because I don't want to commit, don't think I can commit. There is the voices-in-my-head thing where I regurgitate conversations after mingling, but also niggling minor health problems, from which I'm taking a break. Fixing them, that is. I can't be bothered. (The right hip problem has become a left knee problem, still caused by the way I sit, and left shoulder problem has gotten worse, but I can't be bothered going back to acupuncture. Before extending my head meds prescription, Good Doc Karl wants me to get tested if I'm allergic to any of the new foods in our diet, but I can't be bothered, and it's a little expensive.) And then paranoia sets in; I'm convinced "they" know I won't do an adequate job, or they really don't like me, so here I sit.

In terms of eating, I know it's bad manners, but when Ben's not home I prefer to stand by the kitchen counter and eat, not sit properly, because then I don't have to sit and resit to make sure I'm doing it correctly.

Because we "quit" carbohydrate, (we cheat, but far less often than Doc Karl allows us,) I lost my hobby/pet sourdough, and now I'm into fermentation/pickling. For a few weeks I was cutting up something every single morning. But there are only two of us and we can eat only so much fermented veg, and while I got used to the warm, sweet aroma of fermentation in my fridge, some age more quickly than others and yesterday morning we woke up to quite an alarming smell, (picture a jar with a small black furry life form in it,) but I couldn't see it. So I cleaned the whole fridge, wiping every surface with vinegar, opening every single jar/bottle/container and sniffing them, and still no casualty. I replaced all three containers of baking soda, again, but this morning, there was a hint of the same critter. So I think the universe/fridge is telling me to make a far less at once. (If you want quicker fermentation of sauerkraut and the like: dilute a small amount of miso in the brine, or rub it in with the salt when mixing with the veg. Because miso has so much salt in it, I tend to make weaker brine to cover the veg, but I think this may be causing the white mold, and the regular 2-3% brine is better. I get a while film on the surface of the water often, which I skim every day, and can't tell if this is caused by miso; my fermentation knowledge is still in its infancy.)

I've been listening to a lot of podcasts/audiobooks while cutting veg and washing jars. And I do love auto/biographies and author interviews as they do make me reflect on my life. But are recurring thoughts/issues really paramount or even important, or am I just not able to get over them and move on? 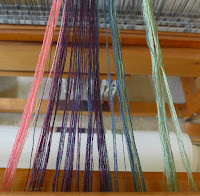 Because of Cally's Feng Sui comment, (my description, not hers,) I went downstairs and wound a warp yesterday. Apparently after I made the warp, my super sharp scissors' got too near it and seven ends were severed at the same place, about the middle of an 8m warp; I put in temporary ties but that is going to cause me some headaches at the green end. Not sure on the threading yet.

PS. There are a lot of people feeling, I hope low-level, anxiety and depression right now. Let's talk to other humans and get medical/financial/legal help, especially if we start to feel we are not our usual selves. With changing times, if the "help" is not adequate, let's look elsewhere, because "they" might be as confused; let's persist until we get what we need. Even if a whole lot of this is a big, f-ing, unnecessary bother if it weren't for the few who don't know how to publicly/civilly serve. Promise.
Posted by Meg at 5/24/2017 03:51:00 PM