Hot Beanies and Exhibitions Part 1 of 3

Tuesday turned out to be a good day. It was slightly breezier, and the temps stayed lower, (up to around 22C,) into the early afternoon, so I got some housework done, blogged, had a slow lunch, and went downstairs and wound two warps on two looms, though I haven't been able to settle on threading for either. And I knitted some more.

Yes, I'm knitting. I needed a reason to buy a few balls in interesting colorways while in Dunedin with Sandy, Mrs Cady, and Ben suggested he could always use another beanie. But because I don't do due diligence with knitting, I had six false starts where either the thing was too small or I didn't like the number/placement of the cables. (??) Not sure if this is big enough; the circumference is about half of one previous, way-too-big beanie.

Yesterday was hot and still again, and although I managed some ironing in the morning, the rest of the day I spent on the stairway, the coolest part of "upstairs", trying to figure out interesting threadings/patterns, in vein, and knit some more. I started on the top step, then descended one step at a time in search of coolness, then finally realized I'd be happier knitting in the basement, so I went down at 6PM. Talk about brain meltdown. 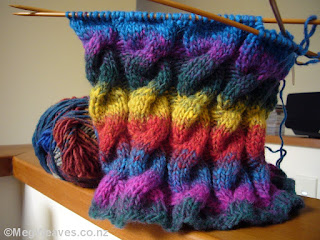 It might turn into an experimental 3D piece in which art critics of the future will claim to see something vaguely connected to my weaving, etc. LOL.

Without further ado, and no doubt, it is hoped, reflections/thoughts will come later, but here is the start of the list of exhibitions I've seen.  I'm pleased a whole lot of what I saw in Japan were interconnected.

Ikuo Hirayama is a well-known and well-received Japanese artist, most notably for his West Asian, (regions we call the Orient or Silk Road,) scenery, architecture and artefacts. It was the first exhibition Mom, Sister and I went together. Sister and I were more interested in the artefacts than his painting, and we learned he was sent by the Japanese government as part of archeological/restoration/preservation efforts for decades. He was the recorder, as it turns out, before many of these places/pieces were lost/destroyed. It was also nice to see Mrs Hirayama's ovservations included in the exhibition.

I was fascinated by a Persian artifact of female figures looking surprisingly "Asian", in contrast to another from current West of China looking, goodness, what's the word??, "Aryan". (Although if you think about the origin of the Aryan race, it's hardly surprising.) His paintings were large and moody, but foggy/blurry and we felt ho hum about them; in a large, quiet hall, without too many folks around, where we can stand a distance from the paintings, our reactions might have been more positive.

Machida City Museum of Graphic Arts, (commonly referred to the print museum,) is minutes away from the family temple on Dad's side; I'd heard good things about this place but never went because Machida is so far. This time, I was interested in their exhibition of the Bunmei Kaika for Children Depicted in Ukiyoe, (Bunmei Kaika literally meaning "opening/flowering of culture/civilization", but points to a period of rapid Westernization after the opening of the nation and restoration of the imperial power, 1852-1868,) and another further away on the same train line, so I went.

The exhibition was fantastic; they had over 300 exhibits, not just prints but books, picture Japanese/English dictionaries, posters and what you'd call board games, many with pedantic messages more than depictions, all exhaustingly upbeat. Most intended for boys were thoroughly ambitious and encouraging; for girls, although it was nice they made stuff for girls not so much as an afterthought but long the different-but-equal thinking, and some material even encouraged academic and athletic success, the end goal was inevitably domestic success.

The galleries were darker than usual and hard to see, but I ended up going around three times. At first I was taken aback by the vividness of colors, and the frequent appearance of teal in all its variations, (not a color I expected,) and light blues, and blue-reds instead of yellow-reds more frequently seen, at least up to then, in textiles and ceramics.

The museum also had a wee cafe run by "regular grownups" but employed variously handicapped youths, and the controlled chaos of that environment added to the museum's attractiveness. This museum will be on my "regular" list for future visits home. 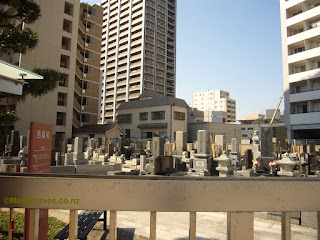 Waving a fond but quick hello to Dad and ancestors, not only because I want to get to the museum quickly, but also because Dad was never the type to sit quietly in a urn in a graveyard, bones or no bones. 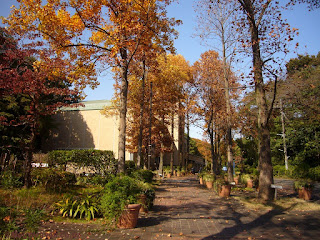 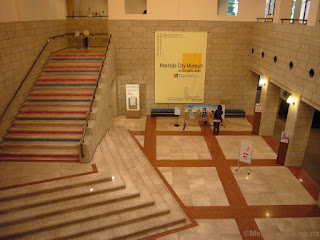 I know it looks empty, but for an odd hour late in the afternoon on a Saturday, the exhibition was crowded. No photos from the exhibition.

Afterwards, I ran around Machida Station looking for the memorial to our Silk Road, the road from Hachioji to the port of Yokohama. The few folks I asked never heard of it; I thought of asking the policeman in the police box, by which I walked passed several times, but I didn't because I expected my internal radar to tell me. After 45 minutes and some sweating and cutting it way too close to make the next exhibition, I gave up.

(I went home and googled it and, darn it, I found a pic of the little thing standing in the shadows of the police box, and curse the google map who put it to the right, not left, of the police box!! But this morning I'm thoroughly confused because google map is showing me a different location a little way away from the station I ran past, while pics are showing the location in front of the station but none showing the police box. I can only assume Tardis in Japan is red and is a police box!! Even a friend who's lived most of her adult life in Machina had never heard of it. Serious research required before my next trip home.)

Off to Hachioji, where Dad's late aunt's husband's family once traded in silk, but lo, what's this, a Station Road giant annual outdoor ceramics market?? 15 minutes to the museum, 45 minutes before closing, I could sacrifice 10, I guess, time for one stall, it would have to be Tobe-yaki, but no, everything here is too thin/light/cheap for Tobe. Moving on.

The exhibition I really wanted to see was by the 1930 Association, a group of youngish Japanese painters, some of who had spent time in Europe; the group started around 1926; they thought 1830 was an exciting year in Western painting and wanted to make 1930 equally exciting for Western-style painting and other forms of visual art in Japan. The show didn't disappoint.

Hachioji-shi Yume (Dream) Art Gallery was tiny, and the exhibition was tinier still, but they showed energetic/youthful paintings influenced by Impressionism/Post-Impressionism, Fauvism, Dada, Cubism, and Cloisonnism that I can remember, possibly as far as Surrealism, and photos, receipts, exhibition chores checklists, postcard sales list, exhibition posters and programs, and good many correspondences. Saeki was the only one I was aware of, (I went to Hokkaido to see a museum dedicated to him once,) but I fell in love with the themes, (labour movement,) and colors, (oh, the reds!) of Maeta Kanji.

Hachioji was the seventh and last museum to host the exhibition, and I was there day before they closed; I will be forever patting myself on the back for not skipping it before I ran off again to meet a friend for supper.

I got the big fat catalogue from Machida, but couldn't fathom carrying another big fat one from 1930, so bought a slim volume from a previous exhibition by Maeta and one other of the group. I may come to regret this.