Food, Body and Other Miscellany 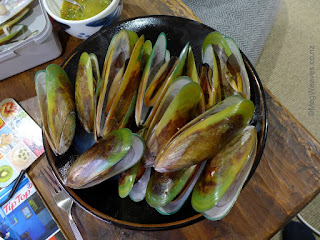 My hands are better. Or I'm learning to treat it better. It's amazing what teaspoonfuls of cinnamon and turmeric can do, helped by steamed green-lipped mussels Friday night, hand cream with mussel oil Thursday onward, fresh pineapples since Saturday; (a former weight-lifter Peter told me they are good for... something when I had a tennis elbow, if memory serves; tennis elbow-arthritis, roughly the same area??)
It is no exaggeration to say I was in pain. (Mind you, I've never been seriously ill or injured and my pain threshold is childishly low.) Worse than during the lockdown when I was more surprised by the look of my right pinky with a more specific pain. This time it was both hands, all over, up to my elbows. I sat in the kitchen dazed, trying to swallow large glasses of different teas with C&T. 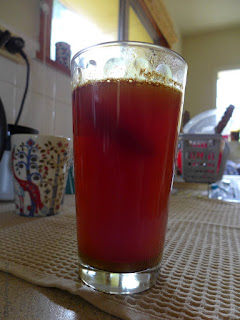 I don't care for the smell and taste of turmeric, the way it stains my kitchen counter, though I like it in curries, and the color on appropriate surfaces like fiber even if it's not colorfast. With teas, I discovered turmeric overpowers cinnamon, no contest, so most concoctions smell like whatever trying to distract turmeric and failing. By Thursday, however, either I was getting used to it, or blood orange tea has a strong enough smell, I could down it quickly. I also have pomegranate tea which Ben says has a strong scent; I tried it on Monday and it didn't work but I'll give it another go. Another I drink often, one called Mi Chai, which I assume is akin to Indian Chai some drink instead of coffee, could not compete at all with turmeric in spite of the strong scents.
Yesterday morning was coldish, so I made C&T with warm milk. Lo and behold, turmeric blends well with milk (fat?) and the smell all but disappears while the lovely scent of cinnamon remains. Because it's milk, I can't drink large quantities as quickly as herbal tea, but this is a concoction bordering on nice.
It appears I must keep making and drinking C&T concoctions for the time being, though. Each glass full seem to work for longer, so I don't wake up with throbbing hands any more, but if I don't have one early-ish in the morning, by noon pins and needles return. And I am more comfortable if I remember to top up with another in the afternoon or evening.
I wove on the small loom in the kitchen all week. I'm preparing for the possibility I have to live with arthritis, because it keeps coming back. In this case, I want to train my body and mind now to get used to the idea of weaving in spite of it, because I'm kind of simple like that, I react in a certain way to a certain stimulus. It's worked so far; the pain is general/all over so no particular weaving motion made it any worse. Between Harry Potter audiobooks and the fun I'm having with colors allowed me to put arthritis on the back burner for the time being.
Luckily desirable foods for diabetes and arthritis are similar. I was distraught when a good friend recommended a cookbook called "How Not to Die", not because I thought we would die otherwise, (well, we all will eventually, but...) I'm more, Delish/Yum/Domestic-Goddess kind of reader/eater. I tried to recall the 18 months when we succeeded in reducing sugar, fruits, root vegetables and carbo, and portion, rather drastically. Ben lost some weight, we felt healthier, and best of all we started to appreciate flavors better, and yet, and yet, that diet seemed bland and pale and tasteless in my head. (Mind you, the book's content appears good; it has a full chapter on beans, so I'm still thinking.)
On Friday, we spent big money on a shipload of veg and interesting ingredients including new-to-us Indian spices. Coming home with all this and being reminded of how we ate made the world look slightly more colorful. After 18 months of slacking off, eating more "regular" food with more carbo, it's hard to walk past potato chips, for example, in the store, so we didn't avoid them. But we didn't need ice cream or chocolate on top. I got rye and spelt to keep baking our loaf a week, but also enough dried beans, so we can substitute with healthier ingredients. And then, there will be a great deal of cauliflower, again.
And lucky we're heading into summer; it's easier to eat well now. 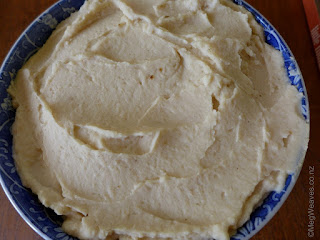 Cannellini mash, which was a great success last night. When making it for ourselves, I make it more bland with its own cooking liquid and rely on the flavour of the main dish, but for company I used milk, ghee and salt. The texture was spot on, though I could still smell the beans. This is a most adaptable dish. 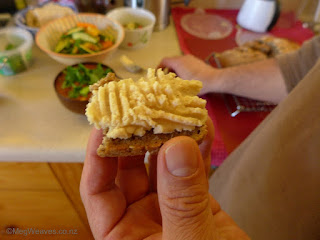 Ben used it as a paste on toast this morning. 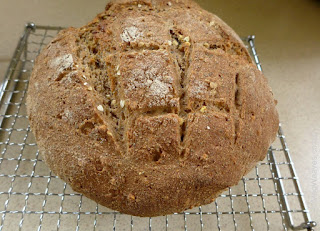 I baked the weekly rye/spelt sourdough. 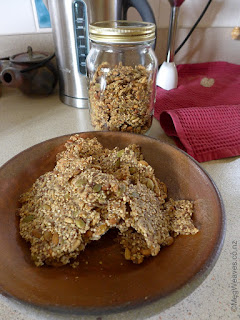 I made seed crackers, but I didn't pulverize brown rice enough the crackers didn't stick, so I gathered the bits in a jar to have with yogurt for breakfast. This morning, I was advised by Carolyn Olson to use corn flour to make them stick. 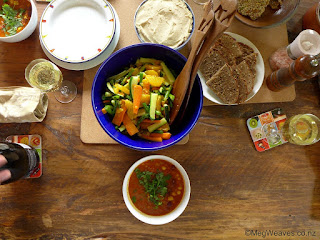 Green and orange salad: fried carrots and zucchini, steamed string beans and asparagus, cucumbers and grapefruit segments from our garden. Ben made a sweet vinaigrette, which brought together all elements beautifully. Bottom is Esther's Moroccan Harira. 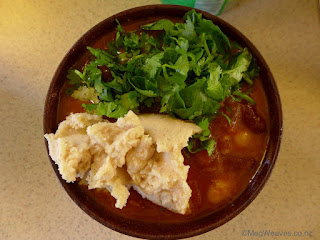 This morning we had leftovers. Ben opted for toasts, but I chose a dollop of mash and an indecent
amount of coriander. Boy, they do complete flavours don't they. I'm glad I started a biggish pot this year. 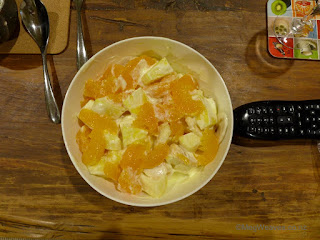 Esther is an amazing-est baker, but we had to decline her pudding. Or she declined to make it. We opted for pineapple, apple, banana and grapefruit segments in yogurt for dessert. It was very refreshing. 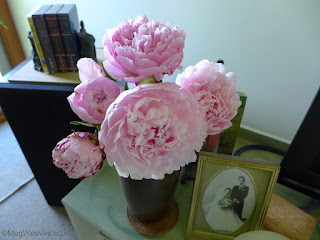 Not a bad consolation prize, though, I say. Now we both want to grow peonies.  But gardening will happen in moderation when the hands are OK.
Looking back, during lockdown we ran through the supermarket to grab veg and protein most trips. Since we've been free to enjoy slow food shopping, we've been buying two and three treats rather than just the one. Or none. We were careful not to put on weight during lockdown, but we've certainly bulked up since. So, all in all, it's a good thing my hands hurt to alert us to what we're doing to ourselves now. Rather than relying on Ben's blood sugar level, relying on him to measure at the right times of the day, we now have my hands as an indicator for how we're doing.
Not a bad thing, all things considered.
Posted by Meg at 11/29/2020 07:29:00 PM