Hello again. I've been "busy" doing normal things, pretty steadily for me, hurray, but haven't finished anything to show you in a ta-da! way. 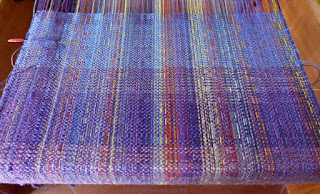 I am regularly weaving the colorful Summer & Winter piece in the kitchen, a perfect position for a something-every-day project, but have slowed down somewhat; the best I manage is around 10cm. Most days I enjoy the weaving, but I am also growing tired of having a loom dominate the kitchen table, with a rather dusty warp at that.
I was writing to Mom about this, but I couldn't explain well what I was doing. She's woven Summer & Winter, but in the usual manner showing off shapes, while for me it's about color/value interaction. And although I attached closeup photos, I'm not sure if she can see 60/2 tabby adding nuance to the 20/2 pattern. I'm pretty sure she can't.
(For non-weavers, this is a weave in which I alternate a fat "pattern" weft, the dominant horizontal color you see in the picture, with a skinnier "tabby" weft, ostensibly to secure the structure of the cloth so there are no long floats which may snag, but I use these to give nuances to the cloth's colors. For e.g. in the middle, purple section in the pic, I used a dark purple tabby first, followed by a pale olive green. These tiny threads can enhance harmony, create disharmony, or bring in very gradual progression, all of which are thrilling to experiment with.)
Speaking of Mom, she can no longer hear her phone ring, she can't hear our voices on the phone well, and to be honest I'm not sure if she's interested in listening to what anyone else has to say. After she rang my sister half a dozen times in quick succession over some days and weeks, with demands, rants, and confused admonitions, pushing sister on the verge of a nervous breakdown, Sister asked the caretakers to take the battery out of her phone. Temporarily, I hope. That's gotta confuse Mom big time.
Writing is the only way I can communicate with Mom at present, though she not being a writer I doubt I'll hear back. And to this end, I'm writing half a dozen very short letters and postcards at a time, with the emphasis on photographs and drawings rather than text. Ben's been posting them three a week for me, so half a dozen doesn't go a long way. A few weeks ago one Monday morning, I realized I may never speak to my mother again. But it is what it is. Mom dislikes hugging and sentimental expressions of affection, but I think postcards saying just, "Love you" or "Thank you" are forthcoming, in addition to old family photos.
With the facility's own restrictions on top of the phone issue, at present Mom's lost all means to reach out to people outside at the moment, unless she writes, which no doubt is going to speed up her deterioration. It appears she's refusing rehab, too, so wheelchair and all kinds of what could have been temporary assistance are becoming permanent. But these are my conjecture. I'm aware I said I'll write about Mom a few times here, but her conditions/situation are changing, and too much is me guessing, so suffice it to say, not very good at all.
* * * * *
The amount of rain we've been having is becoming unusual for this time of the year. I'm not complaining, it's been mostly pleasant for me, but occasionally loud enough I worry about the roof caving in. In between, I have been weeding, most recently between and under the carpet neighbour Katheryn gave us during Lockdown for the steepest slope between our houses. We also need to finish securing them to the ground. (We ran out at one point, but Katheryn gave us some more, and we never "nailed' those down.) On one of the hottest/sunniest days so far, I pruned branches blocking the sun to her magnificent lemon tree, for eight hours, with a small handsaw. That was exhausting, and to give myself a break, I missed out on a couple of gloriously cloudy and cool days on the weekend to finish the job. but I got some stuff done.
Most of the more important patches, where we can see from our house, is now looking... bad, as if there was never any Lockdown gardening. And in fact we did work heck of a lot on unusual patches in our grand estate.
During Lockdown, I had a brush with arthritis; it was very painful but concentrated on the right hand, and it went away relatively quickly with some green-lipped mussel ointment and by cutting out sugar/carbo from the diet. I had forgotten about it, until this week, when it returned big time. At first I honestly thought it had to do with weeding that particular slope, but the weeds are the same as everywhere else, and because it's my hands, both hands all over this time, not legs/feet, so it's got to be other reasons. We did have a particularly sugary/carbo-y day and a half with a successful rye/spelt loaf, (great with peanut butter and marmalade,) for breakfast; my first ever carrot cake for afternoon tea; and a very well-baked asparagus flan with supermarket crust. I was just thinking we need to go back to the bland but healthier diet. The last few days I'm back to no sugar/carbo, giant glasses of tisanes with cinnamon, (like!) and turmeric, (loathe!) and it's better today than yesterday morning when my whole body felt hot and overly sensitive to all kinds of sensations.
To my knowledge neither of my parents had arthritis, but Dad had gout on one foot. I wonder if arthritis is something I need to be mindful of for the rest of my life.
The only good thing is, foods best avoided for arthritis are similar to those bad for diabetics, so if we return to the healthy low-carb/more-veg-than-we-care-to-name somewhat-bland-but-easy-in-summer diet I was thinking of just a few days ago, we should be OK. Fingers crossed. 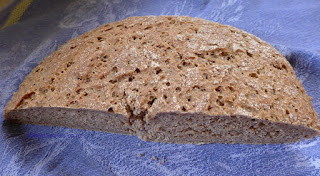 Rye/spelt loaf. I use a no-knead recipe but I felt like kneading after watching a cooking show, and now I know this recipe isn't harmed by kneading. 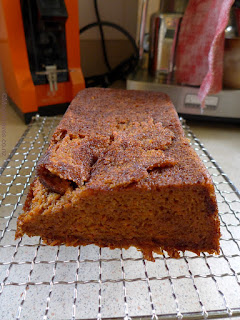 A very moist carrot cake, because I'm always afraid of over baking things in our wonky oven, and I was in a hurry to turn it out. It went back in the oven at 30C fan bake for a while to dry it a little more this morning. This one is so delicious I can't believe I made it. 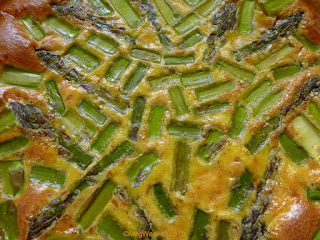 A too-well-baked asparagus flan, because I forgot ours is a tart dish about half as deep as a flan/quiche dish. Yummy, though. Maybe one more before asparaguses disappear from the stores.
Carrot cakes and flans/quiches are some of my favorite dishes, but I've never made them before. It's that thing I do where I fear failing/ruining things I love, same as studying weave structures or buying fabulous yarns and sitting on them for years before actually putting them on the loom. Not delayed gratification, but an overwhelming reluctance. I'm getting old now, and if I'm going to have to live with arthritis on top of everything else, I better not put off things any more lest I'll never get around to them.
These carrot cake and flan recipes are so simple and adaptable, we brainstormed options/substitutions all evening before my hands flared up. So... I'll try to concentrate on the weaving for now, but I'll have to create occasions to inflict the cake on (un)suspecting friends over the holidays.
Be well, dear people.
Posted by Meg at 11/25/2020 02:45:00 PM