Yes, definitely, I have been able to look at life and take on tasks with a much lighter heart since Sunday morning. I unsubscribed from a whole lot of news sites, deleted my short-lived Twitter account, and copied out my mid/long-term To Do list. To be honest, I'm astounded how much "free time" I have now.
Yesterday, Monday, I ironed, weeded that terrible slope Ben I worked on in the early part of the lock down, (it's just between the carpet/weed mat, but after seven days of rain, they were ever so robust, I'm between 1/3 and 1/2 done and will have to kill some with vinegar because the roots were like extra-strength gauze,) and wove. In the last while, I would have done only one or two of these in one day, but I managed three. I even thought of knitting in the evening, but the slope is hard on the body and I wanted to lie flat on the floor to stretch my back, so I played a computer gave while listening to Ben watching a 007 film. 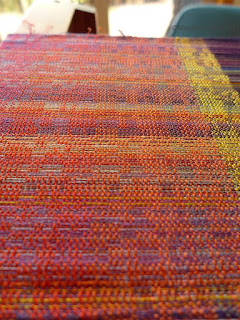 The "spontaneous" piece is coming along. I can manage around 15cm in a day if I do little else, but I have been genuinely enjoying concentrating on the placement of "codes", planning the transition of the pattern colors, or talking and laughing out loud, (really!) playing with the tabby colors. And one clear benefit of the last component is, say, with one pattern color and three tabby, you get three nuances of one color, especially if one tabby is similar in hue, another in value, and the third complementary. My natural tendency is to create ripples of gradation, but when I'm able to step out and use unlikely pairs, the cloth becomes most inviting.
I know this is fiddly, but honestly, I don't understand why I don't do this more often, or even have a permanent warp on one of the smaller looms, if only for mental health. And this particular table loom, ex-Nelson Polytechnic Weaving School spring-loaded 8-shaft, for some reason always allows me to weave with nice selvedges.
* * * * * 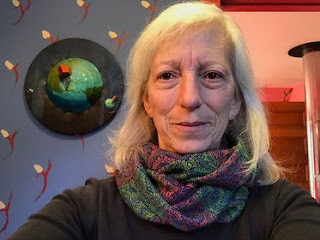 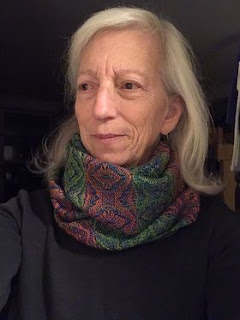 I love, love, love it when folks send me pictures of them with my weaving, but it's a slightly unnerving when it's another weaver. Here is lovely Ruby with Kaleidoscope.
Ruby and I have been exploring "ideal" cowel sizes. I remember some years ago I realized I had to make my larger scarves longer because most adult humans are taller than me, or else they have to wear it differently from how I/they intended. Then I had a friend commission a short, wide scarf because she lives in Tokyo and commutes by train, and didn't want extra length tucked in her coat nor getting the ends caught in traffic. So if there isn't "ideal" scarf sizes, it's even less likely for cowl, but still, it's worth investigating. I also noticed Ruby tends to produce scarves in three different length; if she/I did this for cowls as well, it's more likely one will fit most anyone, except this is more suitable if the pieces are sold in person.
Kaleidoscope is 121cm in circumference. For the most part I've experimented cowls sizes with knitting because you can pull them every which way and not inflict damage. I have a large head/face, no neck, and chunky shoulders, while Ruby is more delicately proportioned and she can wrap this twice around her neck, although a few more cm would make it more comfortable in doing so. (I didn't dare try lest I'd rip it.) OK, just between friends, this is one of the embarrassing pictures I sent to Ruby while discussing sizes, in all my ancient work attire glory. 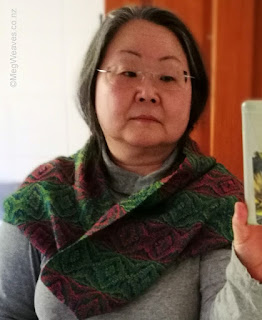 The fabric of this piece is thin-ish, (not chunky,) and it doesn't hold shapes well on its own, so it's most definitely better to wear it like Ruby did. But there is more to investigate, and you know I find it intriguing thinner/drapier may not be the solution.
Oh, I'm still selling, if you know of humans in need of scarves. Thank you.
Posted by Meg at 11/10/2020 04:31:00 PM