Sunny Hemphill wrote on Facebook, "I think I try too hard. I think my desire to do great work becomes a overwhelming. My ideas seem too small, too ... me. I spend too much time seeking profundity rather than doing what I can. My challenge is to break out of the paralysis and be satisfied with my own muse rather than searching always for a better one." (Italic mine.)

It sounded so familiar, you know; the"it" piece, the big idea, the concept worked into textiles. And I was mildly surprised to find myself not there, and not having been there for a period. Though I never made a conscious decision, I've just been trying to do something relating to work every day. It was probably a natural progression, from my inability to live productively, to my mounting frustration, to a pragmatic resignation and a sober acceptance of something over nothing. Lame, yes, but that's been my life for a while; it is what it is.

And I haven't done much; only last week I needed to check when I abandoned my current warp, i.e. when I committed to doing Culturally Routed, and looked into the list of exhibitions I sent work to in the last few years; the last one was in a year ago when I took part in"Feel of Fibre". Lame.

I haven't kept weaving records for the last couple of years, even, but I can recall putting on four warps, five at the most, since the start of this year. Lame. Still, I've managed to do something most days, and that's a far cry from how I fared last year. So, not so lame. And somehow the concepts and the big ideas have fallen by the wayside, pushed back to the less urgent basket/drawer, or been put on the back burner in simmer, whatever other metaphors I can think of, they haven't burdened me nor interfered with my act of making. And that's got to be a good thing.

Some months ago, and I have no recollection of the context, I heard someone discuss someone's body of work, and I remember liking that concept: "body of work", cumulation of pieces, not going for Mona Lisa or Guernica with every warp, but practicing my techniques and designing consistently at the least, and making nice things to wear, and hopefully sell at best.

I try not to dwell on the point, but I think I've been shying away from left-brain thinking and been engaging in right-brain making for a while, which is a far indulgent and enjoyable experience. (Though I've made no progress in the design modules with Ali for too long, and paperwork, and updating of website, etc., have suffered. My hard-drive is in dire need of cleaning, too.)

So I've been enjoying weaving the current piece in which the main attraction is the movement of the areas of color. The warp is merino, the weft is merino/mohair mix; the yarns are by the same source and in the same variegated lilac/purple/dark green. On the loom, it is predominantly the weft color changes that is visible, but after wet-finishing, the warp colors will come into play slightly more. I am loving the simplicity of this piece. (I'll almost say "joy" except weaving with mohair-mix during the hayfever season isn't necessarily joyful, so I'll refrain myself.) 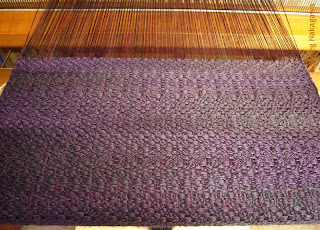 Having said that, I can't weave just now; this afternoon Shaft 16 is not lifting and I can't figure out why. I checked the usual physical points that present problems, and the usual software diagnosis; I need Ben to have a look, but I'm not looking forward to it because most problems with my loom's computer-control mechanism is sporadic and random and we both get flummoxed and frustrated at its... randomness. 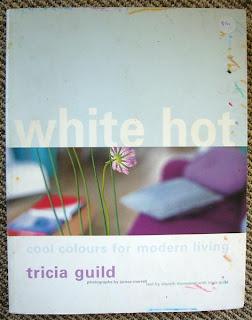 About a month ago, I saw this book in Literarty, one of the secondhand book stores in town. I loved that this one was so loved, and remembered how badly I wanted all/any of Tricia Guild books a few years ago. I took some novels to Literarty on Friday and brought this home. Not only does the cover show the previous owner/s was/were maker/s, but there is "evidence" in the CSI sense the book was enjoyed; there were dried icing between some of the pages, as well as what I think is breakfast (coffee+eggs?) on the foreedge of the textblock (?? - the opposite of the spine). I'm enjoying browsing the pages as well as imagining others who have done so before me.
Posted by Meg at 10/17/2010 02:10:00 PM