After bitching and moaning I never have contents for the Marlborough Weavers blog, I now find myself with contents galore, and I intended to work on them this week.  Because the plan was, the Festival stuff would have stabilized by now.  (Bring out the violins.) With the mess, though, I can't bear to look at the Weavers' pictures, so I need to let the dust settle and work on that blog a little later. Not the way I like to work, not at all "professional", but I figured, better than doing it badly.

I've been trying to recap The Group meeting which took place in what now feels like antiquity - Sunday, April 18. It did go well, and there's been nothing but good vibes from those I've communicated with since then.  But I can no longer remember much details and must dig up my notes, and from where I stand this week, I can't help feeling the notion of me-with-other-humans most trepidatious.   Mid-back-burner.

Remember the two cotton pieces gone missing in the H4C process? One disappeared in the ether completely, the other somewhere in the postal system; the bidder of the gone-Postal piece wants to commission an identical piece.  That was one of the "color dare" pieces a few years back, and not really my taste, but the bidder was a significant person in Ben's and my earlier life, and I'm feeling a divided loyalty between her and myself-the-weaver-with-a-bad-backlog.

Meanwhile, this piece possibly took a tour of Queensland before arriving at Judy's in Sydney, wet and repackaged by the Australian Post.  Judy won my piece fair and square so she didn't have to, but she sent me a lovely package in return.  I love the color and the feel of this 2/28 alpaca/silk, but I just * can't * get * over the woven piece on the card. It makes me want to have a play with tiny decorative pieces.  Me!  Thank you very much, Judy!

Speaking of Australia, Sampling let me borrow scarves woven with silk/stainless steel yarns.  Very interesting and, can I be blunt, almost unnatural; it's like the first time I encountered bamboo garments; I'm going to need some time to let the idea grow on me.

Meanwhile, I gave up on my wee H4C parcel popping up in my PO box; the money I spent was so little I don't even need a refund.

After looking at and feeling the Hearts blanket over Easter, I packaged it up and Ben's posting it today.  It has a lovely fluffy feel, I don't have enough weft yarn to make an identical one, and I dithered long enough posting it right away seemed to be the best solution.  Besides, it's been cold.  Again, I've been pondering my view of "professionalism" vs how I conduct my weaving "business" vs reasonable compromises, because I seem to be compromising more often than I used to or than I would like to.

Meanwhile, Nana can expect a special present in the post.  I (we?) had thought the Hearts baby was going to be the last grand-baby, and the only girl.  I wanted Nana to have something related to this blanket, and wanted to thank her for ordering three baby blankets and one wedding present.  Last year we had discussed nuances of red in some detail, but I wanted something a little grown-up, so this is made of slightly darker reds. And look at Judy's color against the piece. (Oh, that reminds me, Mama wants a heart scarf.) 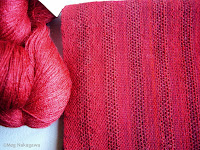 (My camera may have trouble when I shoot red wool, I had the same problem in Blenheim during the workshop. Pics come out much too overexposed, and I can't decide if it's the camera, or the laptop screen which has to be viewed from a far more restricted angle than the previous laptop.)

I'm sending four parcels from NZ Post today, three for work. I'm plenty worried, because, what do they say?  "People who do something and watch it fail but continue to do it the same way...??" But I've always been partial to the postal system as a concept, they never failed me until late last year.  That's 51.5 years of laudable worldwide record.

Rest of the week.

Not rushing to weave a purple cotton piece for Pat to take on her trip, putting the hypothetical gallery issue on the back of back burner, reworking on my To Do list I updated yesterday.  Trying to keep a low profile and not hurt people.  Certainly not volunteering.  Maybe it'll be a good basement loom day.