Last week, we had a short holiday in Hanmer sitting in the hot springs. Usually we go to several forest walks, but this time only one, and we (i.e. Ben) opted to sit in the hottest sulfur baths for an awfully long time for three days. He must have needed this holiday more than I'd thought.

We got into Blenheim for his birthday dinner at Hotel D'Urville, cooked by the fabulous Maree whom we met in a writing workshop a couple of years ago.  It's been our dream to taste her food, and she cooked a special taster dinner for us.  We're not sophisticated restaurant diners, but it was a wonderful Fine Dining experience.  While we don't intend to cook restaurant food at home, I took notes on my menu, and there was a particular venison dish I'd like Ben to try at home, modified to a homier version.  I'm no critic, but we thought Maree's cooking was refined and restrained, allowing each ingredient's taste to come through. 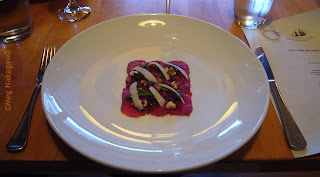 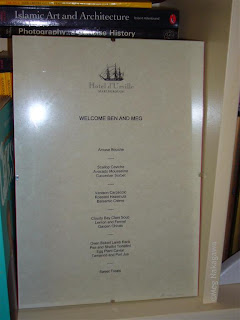 We headed for Win Currie's house where she spoiled us for three days.  The real reason was for Win and I to attend a Block Weave workshop.  (More on that in a future post.) I had to borrow Rose Pelvin's table loom, which was unnerving, weaving on such an accomplished weaver's loom.   I also discovered what a real table loom is like, as opposed to a sample loom.  What a difference.

Win and I have interesting discussions whenever I stay with her.  One of the things we discussed was life outside weaving; she mentioned many of Marlborough Weavers have been too busy to weave, what with family, work/farm/volunteer activities, health, garden, and other hobbies.  I tend to forget other people have life outside of weaving, especially since I'm trying to shave off anything and everything taking time away from weaving.

But I sure am lucky to know weavers who love to garden; I always seem to come home with loot when I see them.   (One time, even Rose's neighbors gave me tomatoes!) Look at Joan McLauchlan's pears, June McKenzie's feijoas and cooking apples. 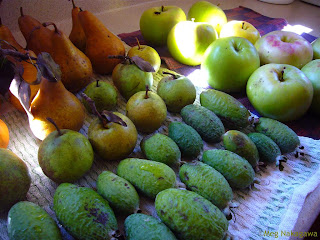 And look! Win's walnuts to eat, and walnut husks to dye with! She and Ben even went out to pick the husks for me while I worked on the 2012 Festival web stuff on the computer with two Committee members. 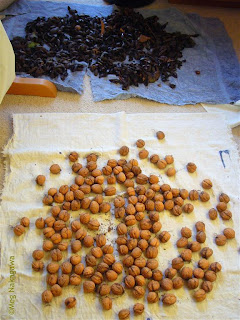