Day 2, and I was raring to go, but there may have been more lecture, and if so, the content of which I cannot recall.  When the time came to weave, Win and I were so glad we stuck it out and threaded our looms the night before.

Most students opted to use pattern/supplementary wefts much thicker than the warp, which looked very nice on the A-side but not so on the B, so I opted for my usual pattern-weft=warp with a much thinner tabby weft. One student had great success with Polychrome Summer & Winter, but I didn't take a picture of her sample.

This is my first sample, washed, where I was trying to figure out the color combinations.  I was also trying to get used to the borrowed loom, so I lifted only one or two shafts at a time, and you can see with the first color combo, I didn't beat hard enough.  The floats are longer than three-ends because of the pointed threading of the tie-down, though not quite the jagged incline I thought I would have at 1.30AM. 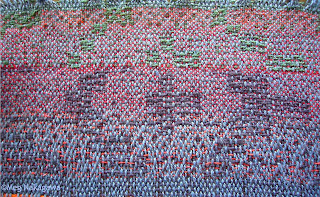 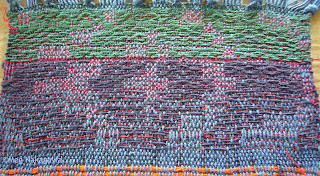 You can just see the twill line, though, from a certain angle. 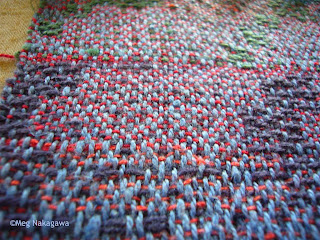 This is my second sample, unwashed, but steam-pressed. I still have about 1.5m of warp stuck no it; Rose offered me the loan of the loom, but we had too much stuff in car from the holiday and I had to decline. I want to put this on a loom before I cut off the sample and wash it. 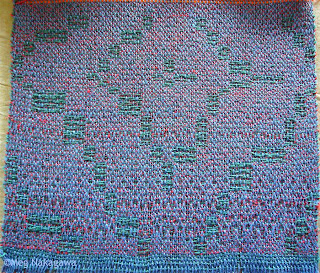 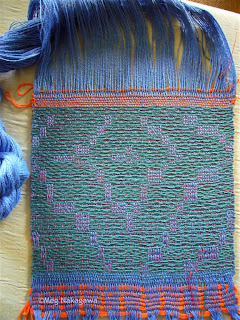 I blame the "missing twill line" on the floats from the pointed threading, and this being not washed, more than the not-very-thick pattern wefts. 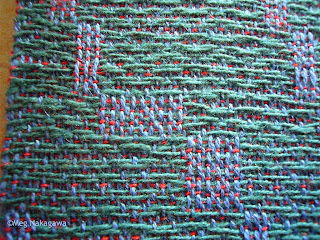 If we were allowed to weave longer, I would have definitely tried other color combinations, lifting multiple shafts, (definitely more evenly attractive A- and B-sides), and other techniques.  But Maryann also covered some pick-up techniques and we had plenty of woven samples to look at, which was great help in understanding what she was explaining to us in theory.  We closed with some photos of some of Maryann's work, and there was one fabulous achromatic yardage that was worthy of an art piece. (Can't find it on the Internet so far, but it was breath-taking.)

I see so much possibilities in playing with the tie-down, from a quick one-block, three-tie weave on a four-shaft foot loom, to giving maybe 10 or 12 blocks to the tie on a 16-shaft loom, and because I prefer the warp floats to weft floats in drapy pieces, I'll most definitely start turning drafts (i.e. even simpler way of incorporating color-technique like polychrome).  I think it's just down my alley in creating deceptively complex cloth, and that combined with blocks and colors, I can see me having a jolly good time for a long time to come.

Win's sample, where you can see, among other things, the twill tie-down working well; she even tried some pick up, (top, salmon pink portion.) 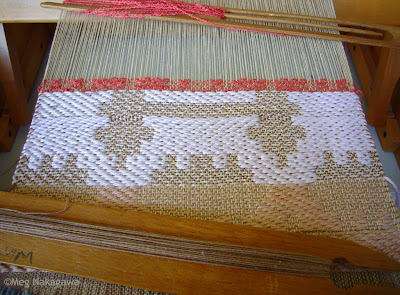