I find it hard to recap Maryann Stamford's Block Weave workshop because in retrospect we covered a lot in two days, but also included were what I taught myself in the last year and a lot of standard practice "shortcuts" and "hints" that from time to time I found it frustrating and hard to focus.  I guess I wasn't the newest newbie on this occasion.

It was still a great workshop, so I'll try my best to cover the good bits.

First, we experimented with different ways of designing blocks; that is, how to fill in blocks in profile drafts without speculating or controlling the outcome of the weave.  (Think "coloring in squares.") Just as Bonnie Inouye taught us to think about designing in threading, in tie-up, and in treadling/lift plan, Maryann made us look into designing in profile, in link box, and in draw in.  Then we practiced filling the draw down of profile drafts, then counting blocks required to weave a particular motif, and created profile drafts based on the motifs in draw down. Finally we practiced writing lift plan based on the link box and draw in.

She explained Summer & Winter and the four sequence options, and we practiced translating 4-shaft/2-block profile drafts into threading, she covered Polychorme Summer & Winter (two pattern/supplementary shots after every tie-down shot) and Taquete (no tie-down shots).   And then, (drum roll, please!) we learned about 3-tied single unit weaves, including Samitum, and suddenly everything turned rosy for me: a way option to play with the tie-down to add an extra texture to the cloth!

Everybody sat down to create profile drafts, which Maryann translated into weaving drafts and tweaked on her computer. I had my computer with me, but I knew exactly what I wanted, a 3-tie twill tie down, and all I needed for the sample was a pleasant-looking curvy line.  I had in mind something like these, but a pointed or diamond twill taking place quietly in the background.

In potentially weft-faced weaves, it is the pattern/supplementary weft/s that make the, er, pattern, so if I were to weave with a pattern weft much more visible than the warp, I would have to think as if I'm using a sinking shed loom.  However, A) I like to use very thin tabby wefts, and pattern wefts the same size as the warp, so as to create B-side just the opposite ("Summer & Winter") of A-side, both sides potentially being the "right" side, and B) when weaving on a table loom I'd definitely like to lift as few shafts as possible; I decided not to worry about which side I will be looking at while weaving.

We went home to Win's, had a lovely lasagna dinner, then we started threading.  Well, Win started threading but I had to finalize my plan.  I wasn't sure about the number of my warp ends, but it was round about 174: 8-shaft loom, three for tie, five for pattern; six ends to a block; so, a choice of five patterns in 28 slots, with a few ends left to float. 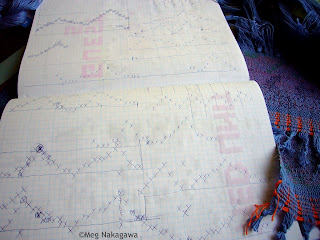 Just short of the halfway point, I discovered I had made a couple of pattern threading mistakes, because I didn't call my blocks A, B, and C, but 1, 2, and 3, and I mistook the block numbers for shaft numbers.  Never mind, that's the beautify of a random curvy line, I adjusted the curve and by 11.30PM we both finished threading. 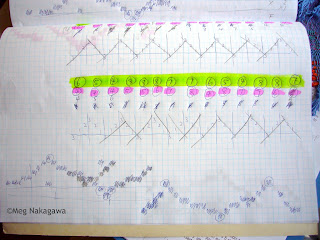 My mind was so hyped up I couldn't go to sleep and I "discovered" at around 1.30AM my twill tie-down threading "was not going to be even peaks-and-troughs, but a jagged line climbing up."  Never mind.  It'll give a contrast to the curve created by the blocks. 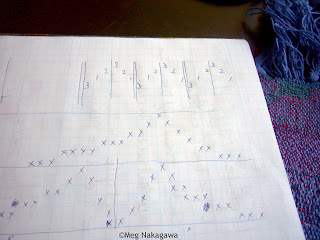