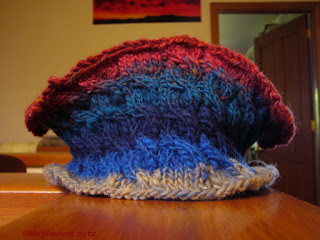 I tried two shops in Wellington and two in Nelson but nobody carried this series of yarns, so I cast off, using a ball similar enough from the stash, and made this a earmuff/Victorian collar. I promptly started another beanie, but after several false starts, I switched to crocheting a huge nap blanket for Ben; this should take a while; another structural experiment beanie after that. 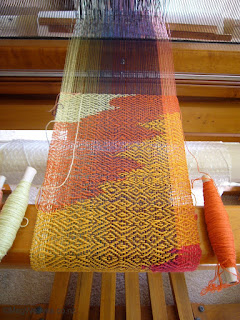 On the loom I started the tapestry technique piece. I think I prefer the more regular patterns to contrast its regularity vs erratic shapes/changes of colors, but I'll live; I'll stick to this pattern until the end of this warp, (two pieces?). And although I'm not thinking of anything overly complicated, I've been gazing at Miro paintings.

I've not been able to do much thinking, like blogging, preferring mundane/busy work, like knitting, mending, and ironing on cool mornings; I've accumulated embarrassingly many journals that need working and sending forward, but last week I concentrated on finishing this year's project, the faces almost every day, which I neglected since late September. Luckily there was a whole bunch of Modigliani on Art and Artists blog, so it didn't take too long to catch up. My notes tell me I drew 600 faces as of Dec 22, but who knows how accurate that is because the number of days for 2017, according to those notes, looks to be 367. In the remaining week it'd be nice if I could doodle 63 faces, (very doable if I stick with ultrasimple blind-ish contours I've been doing, which by the way for the first time has been making me look carefully at the original artwork,) I will finish the sketchbook, which would be a plus.

I've started wishing I had a good idea for a 2018 project but haven't spent energy exploring. Yet. Something will turn up, and I'm usually better off if I whip up a quick idea on the spur of the moment rather than plan/schedule/envision a grandiose "Project".

It's been hot and dry and we've had water restrictions so I've been spending some time carrying dish washing water to the flower pots; that and three hours of weeding have been the only gardening I've done, but I do intend to on cool mornings this season. It's just that we tend to do a lot in the kitchen most mornings, and by the time we're done it's uncomfortable out there.

The house needs cleaning rather direly; that'll happen soon, I hope, but for now Ben and I have been napping a lot in the afternoons. At first I thought, at least for me, the body was trying to make up for the busy-ness since October, but I've more than made up for that, so the only explanation is our old bods are finding the heat still difficult. That said, we have become more acclimatized in the last fortnight, so as long as we are inside, in the shade, there is breeze, and it's under say 23-25C, we're OK. We're such a delicate pair!

And now we reach Oamaru, the Steampunk Capital of New Zealand. We've been curious about this city, in the first instance because of the Oamaru Stone architecture, but more recently because of Steampunk. We arrived on a Saturday to find many places closed and the historic district smaller than we expected. Our accommodation was above a sports bar on the night of the Tonga-UK Rugby League semi final, and even though the ref was devastatingly unfair, the sports bar patrons were well-behaved, we had a good night's sleep, and discovered Sundays are the day to explore Oamaru.

First stop was Steampunk HQ. It's a "museum" and workshop of larger pieces and installations, (a few folks referred to "welding".) Inside is dark and damp-smelling, like a lair belonging to a resistance group or a mad scientist and his minions; outside looks like a junkyard belonging to a genius mechanic who creates fantastic vehicles out of spare parts. And that genius who started it all might have been one Chris Meder, who passed on all too soon in 2010. But the work is carried on by other creators and the building has so much space for expansion. 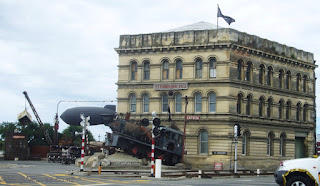 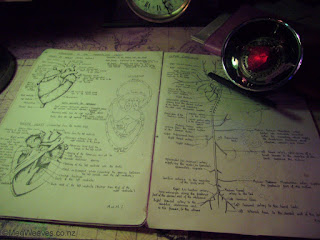 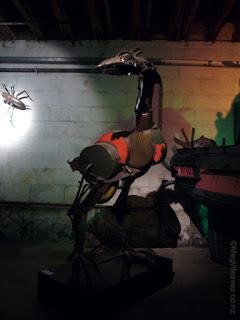 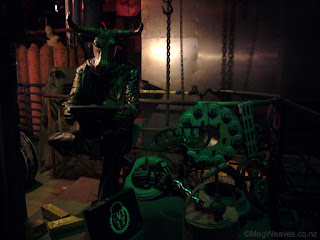 Sorry, I didn't take pics outside because I was busy climbing on some of the vehicles. Ben said he'd love to make something, (not weapons, the "war" part being the one aspect of Steampunk we're not interested in, and sculls, and these two make up a huge part of Steampunk, but pseudoscientific equipment, travel vehicles/vessels, jewelry/accessories, gadgets and documents we are most definitely interested in,) if he had welding skills and tools.

We heard the sentiment repeated by Lucretia at The Gadgetorium in the Woolstore complex. Her shop has smaller items made by her and her partner, both of them immaculately dressed in what I'd imagine perfect Steampunk fashion to be. She not only allows photographs but also handling, and intricately made items were available at stunningly reasonable prices. But Lucretia's insists, and one can easily believe, her first goal is to inspire others to make things themselves. We're definitely going back on our next trip and talk to her some more. 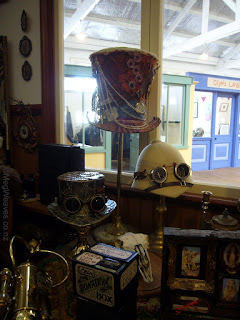 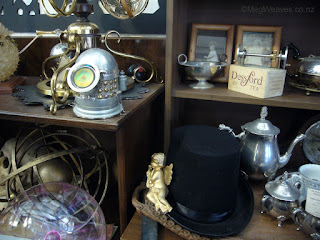 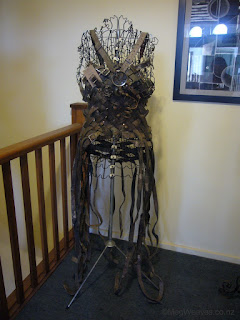 If you do got to Oamaru, don't use the map from the Information Center to explore the historic precinct; there are nice folks at the center, but their map was, to me, useless; look for instead/additionally the illustrated Oamaru's Victorian Precinct and Harbour map. Oamaru has other galleries/museums, including writer Janet Frame's childhood home, along with cute shops, (antiques, used books, Victorian costumes, handmade stuff of all kinds,) attractive eateries, and a small but lively Sunday farmer's market. And Ben's best find, the distillery. Last but not the east, more than a few folks wear Victorian costumes and accessories around town as normal part of the day, adding to the charm and a treat for visitors.

After Oamaru, the only gallery we checked walked into was Christchurch Art Gallery, but we didn't see any exhibitions. The gallery store was charming, with many art-gallery style nick nacks and inviting books, but we spent most of the time photographing the exterior from where we received, day and night, updates after the 2011 Christchurch earthquake. We expected it would be emotional, but didn't expect it to feel so recent.

Ben had a meeting on a Monday so we went to Wellington for one night a week after we came back from South. On Sunday we walked around town, checking out several used- and one new-book stores, coffee roasteries, and Ben taking pictures; I did mostly the gallerying on Monday, with mixed results.

Te Papa had World War I and Lego exhibitions, (so nothing for us;) their museum shop had moved the books to a different part of the building and we didn't look carefully as there was a band playing Christmas music in front of it. The "shop" part has, like few other museums/galleries in New Zealand, taken on the guise of a souvenir shop, selling sometimes-overseas manufactured stuff with NZ motifs, and precious few local art. I miss the days when this place stocked, among pottery, jewelry and wood work, work by one Wellington weaver whose name I can't remember; every time I was there the first ten years of Te Papa, I dreamt of weaving sophisticated pieces like hers. Pity.

Wellington City art gallery was closed for renovation; it is a strange time to be closed, during the high season, but a person in the knows told me it has to do with funding and tax year; it being a city facility the job need be completed before the end of March. The shop, aleit a weird, tiny temporary space, was better; though there were very few local art, they carried inviting arty tidbits including toys, mouth-watering books, as well as original cards. (Although at $7.50 a pop, I didn't get any.)

Wellington Museum, (previously Maritime) added a fair number of interactive things for kids/youths, and I can definitely recommend to that target audience, but it was fun even for an old fogie like me. NZ Portrait Gallery didn't have a lot of portraits, but a good-sized retrospective Frances Hodgkins, possibly the biggest I've ever seen, but I was too hot and tired I didn't give attention due her.

By far the venue I enjoyed the most was NZ Academy of Fine Arts, which I possibly last visited a decade ago for Re:Fine. It looked like an elite art market/exhibition; I found two painters and one ceramicist at whose work I spent a lot of time gazing, but I didn't take down their names assuming I could find more about them on their website. Alas, nope.

This concludes the exhibition part of my recent trips. Pics forthcoming, perhaps in dribs and drabs. Ben's got a few in a totally random order.
Posted by Meg at 12/25/2017 05:55:00 PM